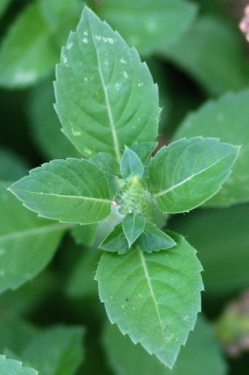 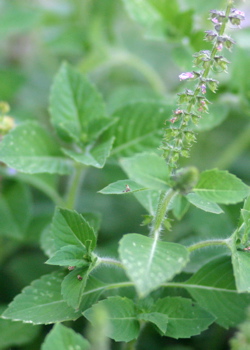 It grows in abundance by the side of our house, and the effect is not unlike standing in the middle of a kitchen in an Indian restaurant.

Found in the Laundry Room 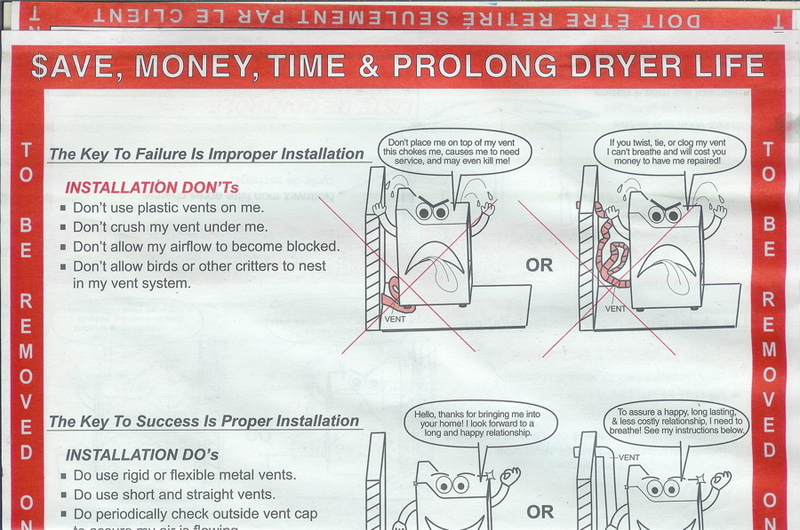 and to be honest, I'm a little afraid to do laundry now.

Check Out the Cover Girl 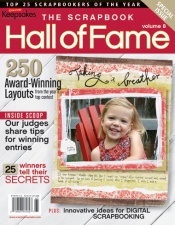 photo by me, page by the fabulous Wilna Furstenberg. Available in September! : )

This Conversation Had To Have Occurred

"Heh heh. Wouldn't it be funny if we messed up their painstaking efforts to alphabetize and organize their 900+ CD collection when we pack these boxes?"

Recently you turned nineteen months old. Though I've never once forgotten to wish you a happy new month each 14th, I missed it this time. You got me back by clunking your head and passing out in my arms, and I still told the paramedics that you were eighteen months, when in fact you'd been nineteen months for two whole days. I will try harder next month, OK? 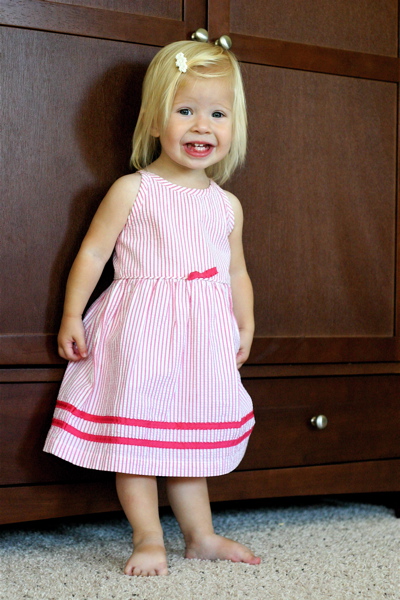 You've become unbearably cute as of late. We're not sure how it's possible, as you've always been wildly cute in between your fits of colic and painful bouts of sensitive tummy and anger-that-has-no-readily-identifiable-cause. But now you've found a way to make us absolutely ache at your cuteness, to want to squeeze you in bear hugs 15 times an hour. Your latest trick is to put your hand up by your nose, point at us, and proclaim as clearly as a bell: "no touch," which comes out sounding like "newwwwwwww TAH—chhhhh." You've heard this many times, and while you don't particularly listen to us, you know which things in our house are "touch" things and which things are "no touch." You understand 40,000 words, we're convinced, but this is your first two-word phrase. Language has been slower to come for you, but the words are starting to flow little by little. 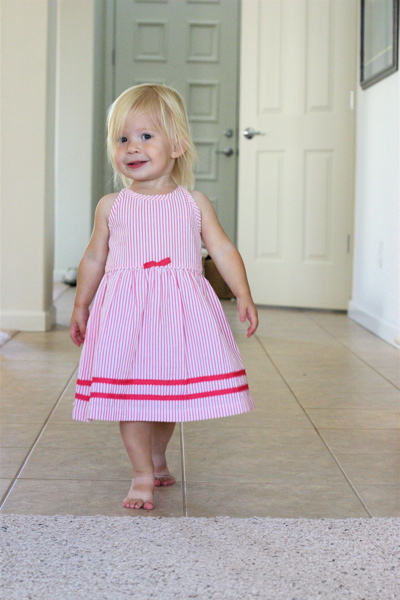 Each and every day your personality is blooming. You're a ham just like your sister, and every night we rehash all the little looks and responses and interactions you have throughout the day. We almost fell off the couch laughing when you were trying to tell us that you had seen Ella in the other room a few days ago; you didn't think we had responded appropriately to your repeating "Ella! Ella! Ella!" and finally leaned over and gave us a look as if we were utterly ignorant and said "ELLA!!!!!!!!" We're not sure, but we think you might have rolled your eyes at us when you walked away. We know we're in trouble. You might be in the 3rd percentile for weight and the 10th percentile for height, but you're off the charts for spunk. We used to say you were a big dog in a little dog's body, and that hasn't changed a bit these last seven months. 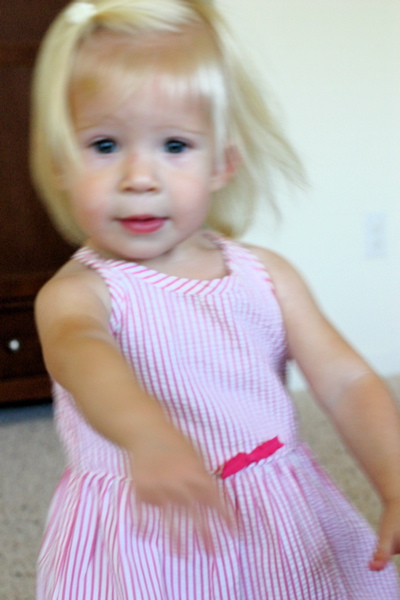 You are also a whirling dervish of blurry activity. You run through the house saying "ahhhhhhhhhhh" just to hear your voice bounce around in your chest, you scramble through the living and family rooms with your sister at the speed of light, you dance like a chicken and spin like a wheel, then suddenly stop to pluck a book out of the bookshelf and flop down on your tummy for a few seconds of scanning pages (today your choice was George Orwell's Animal Farm). Somewhere you've learned to spur us into chasing you by grabbing something you aren't supposed to have and running away, laughing maniacally the whole time. While we sometimes tire of this game, it is hard to get mad at you as we're usually laughing helplessly ourselves by the time we finally catch you. It's been a big month for you, moving from the only home you've ever known to a place where we can't let you play outside most of the time for fear you'll melt into a pile of beans in the heat. The biggest change of all has been a bittersweet one, but one that is decidedly good for both of us: we've ended our nursing relationship. It was time, though neither of us was really ready to accept that easily. Daddy and I experienced a painful four days of letting you work it out in the middle of the night when you wanted me, but since those four days, you've slept through the night like a big girl. I think we're both happier when we have a full night's separation before we see each other again. The morning hugs you give melt my heart, and make me excited to spend the day with you yet again.

Just Put Us Out of Our Misery 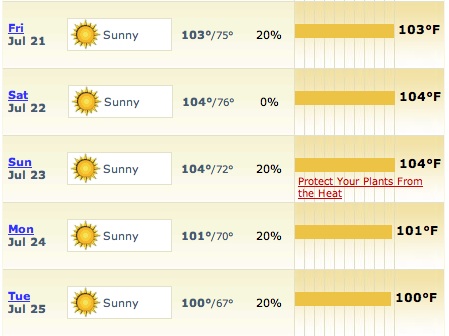 Our new place is hot. How hot? So hot that it doesn't matter WHICH five days this forecast is from... because every day is this hot. Each and every day that we've lived here in California.

In Her Own Hand 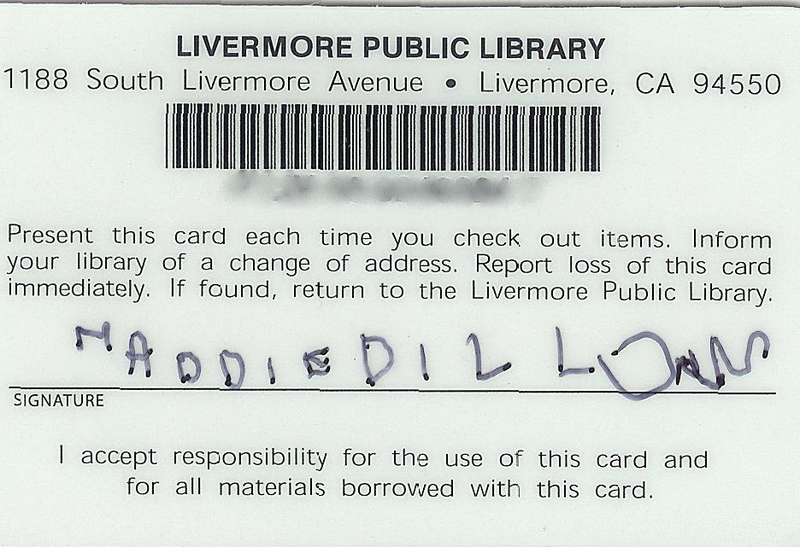 This Story Has A Happy Ending

So. We had a frightening half hour here in the Dillow household today.

Gracie, escaped zoo monkey that she is, climbed up on a kitchen chair to sit as she's done a thousand times before and slipped off.

And clunked her head.

It was a veritable housewarming party, with seven large, uniformed men peering at my child in the living room. They all decided that no damage had been done, because her pupils were fine, there was no throwing up, and she was able to follow simple directions. I still had to sign the "refusal of care" paperwork since I didn't go by ambulance to the emergency room, but that was mostly just a formality; they advised me to take her in to her pediatrician tomorrow for a quick check-up, but carry on with regular life unless she started acting strangely. Most likely she got the wind knocked out of her, or held her breath too long in the wind-up to the real screaming. No goose, no blood, no broken teeth... just a clunk.

Matt wasn't home at the time, so he missed it all. I was very much hoping that his errands would keep him long enough for the firetruck and ambulance to be gone once I knew she was going to be OK. They were here less than 20 minutes; to save him the heart attack of pulling up to a house with emergency vehicles stacked outside was a blessing. Gracie is now the proud owner of a Vermont Teddy Bear Company teddy bear, given to any child who is hurt and has to be seen by paramedics who participate in the program. You can read more about the Little Hero Bear initiative by clicking here. It looks like they're always in need of sponsors and donations.

We'd like to note here to Gracie that there are easier ways to get new toys short of resorting to the kind of scene that transpired here today. And just so there is evidence of her fine-ness: here she is, post-nap, jamming grapes into her mouth just as fast as she can manage. 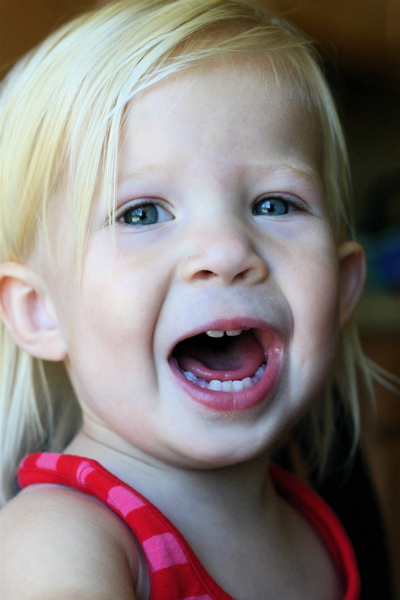 Happy Birthday To the One On the Right

I thought about posting a photo of Katherine by herself, but then decided that it would be nicer to celebrate with all three of us, if only in an old photo from November and online.

Happy Birthday, dear little sister who is more than a quarter of a century old now. I love you!