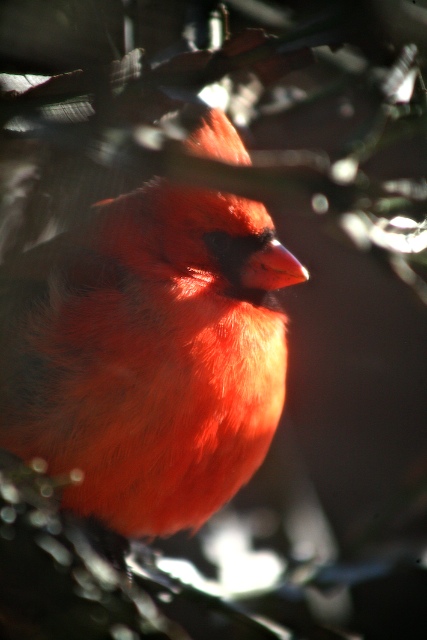 This is Bridget's cardinal. I picked birdie things to decorate her room with long before he and Mrs. Cardinal took up residence in the tree that grows against her bedroom window, which leads me to believe he must have had a glimpse at some point and decided the person that lived inside was friendly. He and Mrs. sit in the tree often, and let us get right up to the glass and watch them. I'll miss them when we move.

Tonight while I was packing tomorrow's lunches I had a momentary loss of confidence in my ability to remember what foods do and do not go together. Because we are out of carrots, I was looking around for something else to go in Matt's lunch and spied a bag of celery. Celery! That would work! But only if I spread it with peanut butter first.

Hmm. I stopped and tried to remember the last time I actually ate celery and peanut butter together. I know I like it, but it's been a long time since I ate it. Suddenly the combination sounded so strange I wasn't sure it actually was a combination. I quickly scrolled through my mental list of other vegetables I apply peanut butter to, and couldn't think of another one. Carrots, ick. Green peppers, yuck. Peas, absolutely not. Maybe this is some sort of regional thing and Matt will open up his lunch and think I'm trying to poison him, not having grown up in my region. Or worse yet, maybe I am a region of one.

But then I had a vague memory of someone putting raisins on celery and peanut butter, maybe in kindergarten, and calling them bugs and being grossed out by it, and then I regained function in whatever part of my brain that shut down for 30 seconds that made me question it in the first place. Of course people eat celery and peanut butter together! Of course they do. At least I hope I'm not the only one : ) 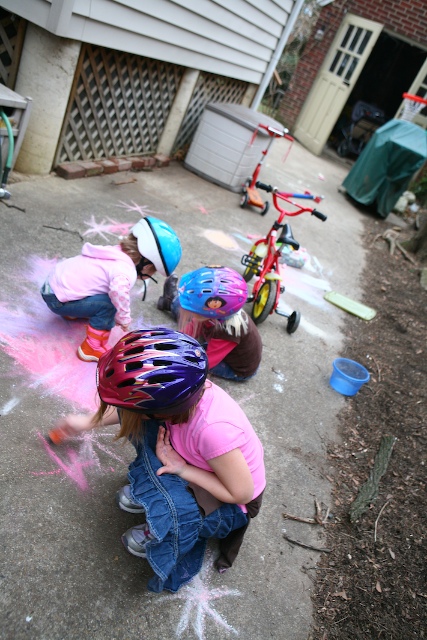 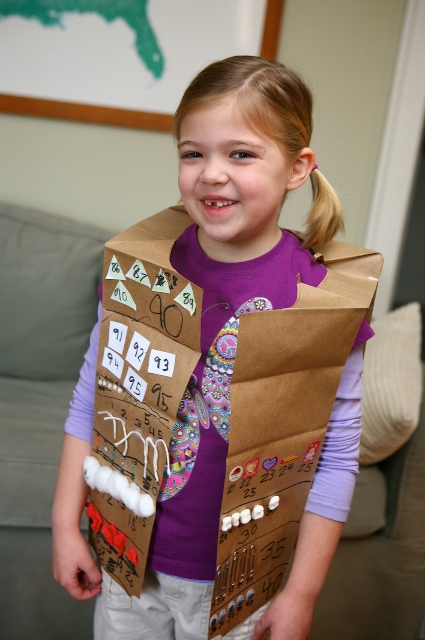 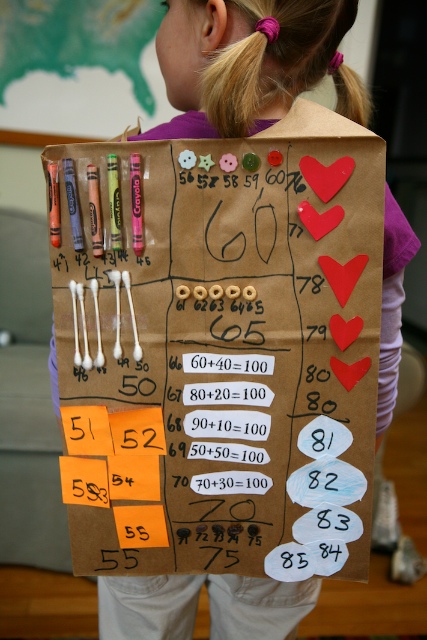 I've been trying to get a head start on the summer's giant upheaval by sorting all my hiding spots for... well... crap. There isn't really another good way to describe my piling/stashing habit and what I pile up and stash. So far I've been through all the kitchen cabinets, the pantry, the bathroom cabinets, underneath my bed, Maddie's closet, Gracie's closet, and the drawer where I keep printer supplies (OK, that's a lie, more like printer supplies + 72 other things that didn't belong. But now it's back to just printer supplies). These have been the easy bits around here... now I'm down to the harder parts. My goal: not to pay for this summer's move for the next two years, like I have been paying for the move from California to Virginia in 2007.

Here is a partial list of ridiculous things I found today in the closet in Bridget's room, which isn't actually her closet but happens to be in her room:

1. Two Christmas cards from 2005 that didn't reach their recipients because of bad addresses, that I never ended up tracking down for some reason. (Story of my life). Working on that today via Facebook.

2. Thank you note from Maddie to Jill and Curtis. WHEN MADDIE WROTE LIKE A NEW THREE YEAR OLD. Oh, for goodness sake. It's a wonder we've received any gifts from them since. Going in the mail tomorrow.

3. A Panera gift card (??). Strange, because I am extraordinarily organized when it comes to gift cards. I keep them in a little tin and know exactly how much is left on each one. But this one I had to check online: it was originally for $50!! What?? Where did I get a $50 Panera card?? I was happy to find I have $2.31 left.

4. A handwritten list of ten things broken by movers in the move from Colorado to California. Item #5 is "Matt's spirit." Hee hee.

5. A pull-out guide from Real Simple about how to cut clutter by determining what you should save/throw away in personal files. Ahem.

7. Envelope addressed to one of my college roommates who probably thinks I'm dead. Stamp on the outside: $.37. No letter inside. Nice.

I just can't wait until I tackle my craft area properly : ) 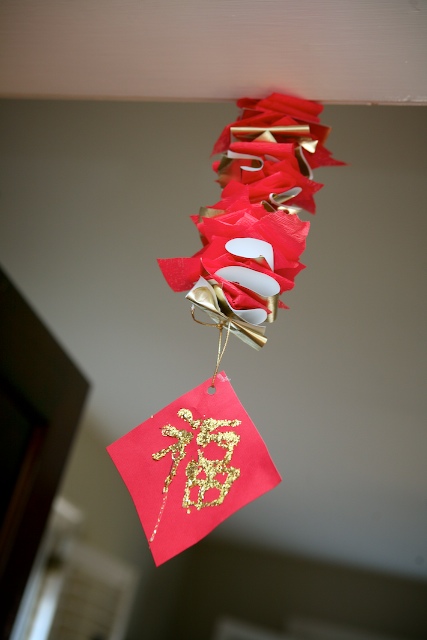 We invited a few friends over on Friday to celebrate Chinese New Year (it's the Year of the Ox!) with some crafts: paper lanterns and good luck garlands. Gracie managed a sharp needle mostly by herself to thread her garland. The glitter didn't go as well. But we all I know better when it comes to Gracie + glitter, so really, I don't get to complain about the gold glitter turning up everywhere. We had in attendance: two rats, two roosters, three pigs, a rabbit, and a monkey. (Guess who the monkey is?) Only the monkey and the roosters made things, and the horse that missed it while at school made hers over the weekend.

But that's not all! On Sunday, I took Maddie and Gracie to Chinatown for the New Year Parade. 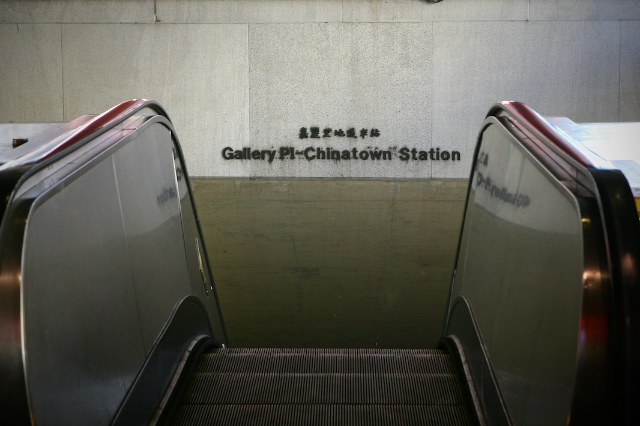 We can leave our house and be in Chinatown in exactly 27 minutes if we hit the train just right, which we did. And that includes parking the car at the mall first. Not bad. 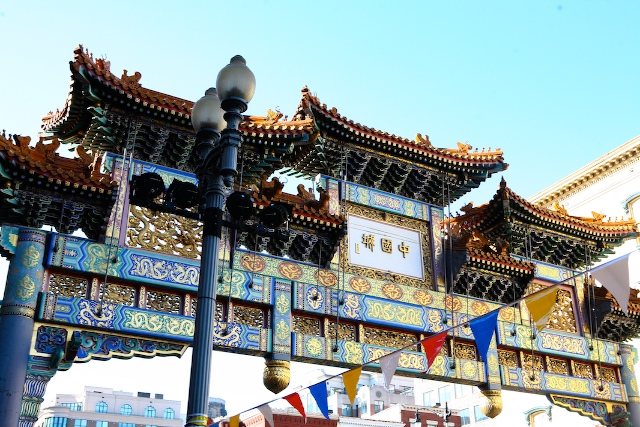 There is a beautiful arch right outside the Metro stop; there were also thousands of people milling around, so I couldn't get a picture of the whole thing. 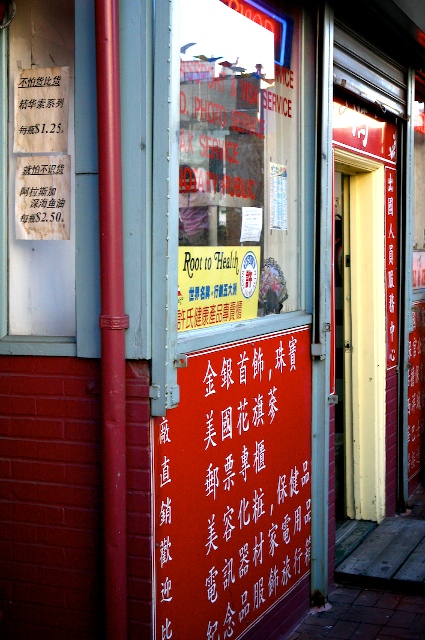 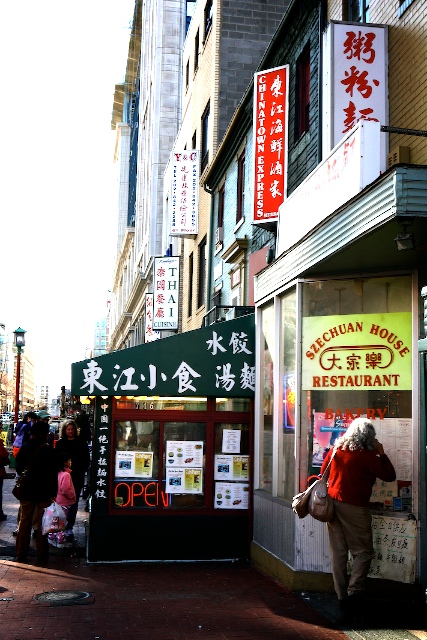 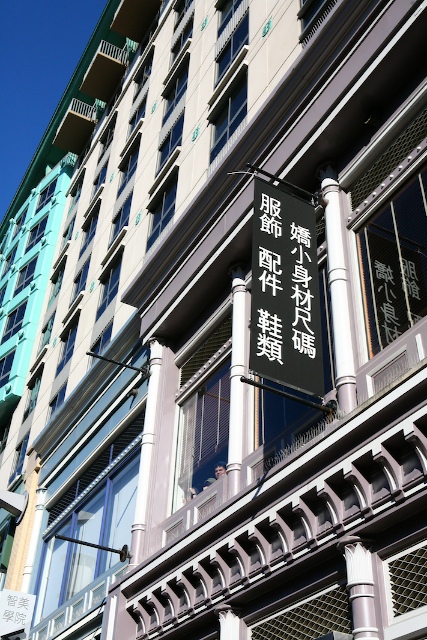 I'm always as much interested in the buildings as I am in the actual main attraction...

All businesses within the boundaries of the neighborhood are required to have Chinese signs; it was fun to see Bed Bath and Beyond, Ann Taylor Loft, etc. with Chinese characters up above. And of course, La Tasca—Spanish food, Chinese characters, U.S. soil. 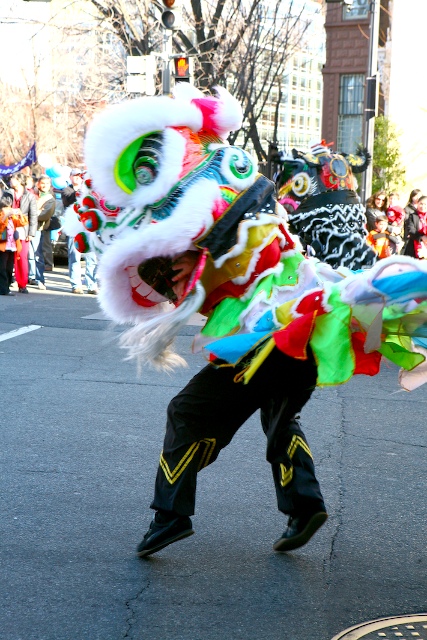 It didn't occur to very many people to walk a little further away from the Metro entrance, but we wandered around looking for a good vantage point for short girls and ended up at the beginning of the parade, where we had front seats to all the action : ) 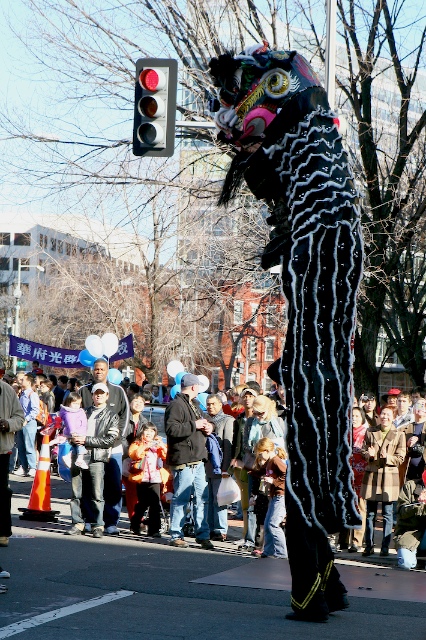 The dragons were Maddie's and my favorite. 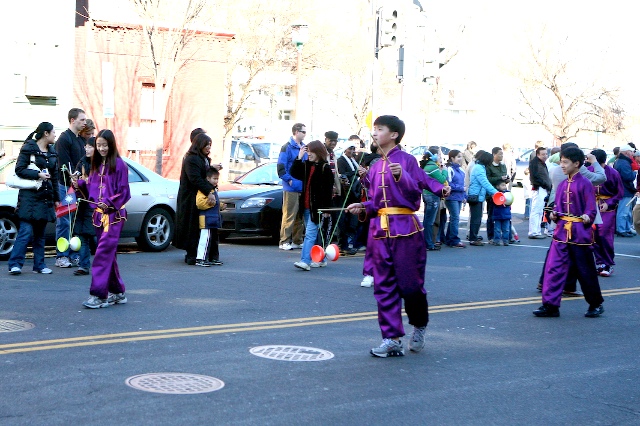 Gracie loved the drums and this troupe of... spinny-thing people... I don't know what that's called. But they flipped them up in the air a lot and did some cool tricks. 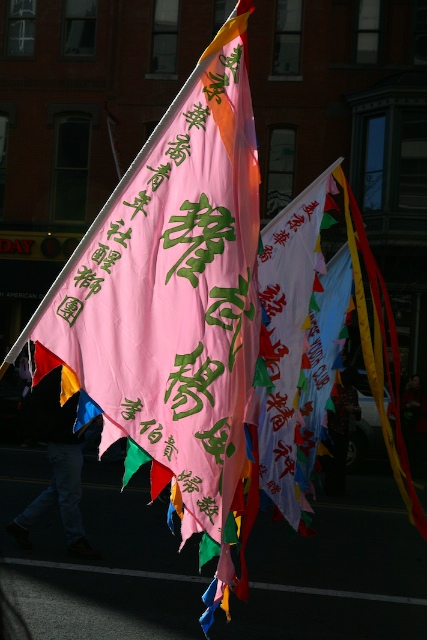 We looped back around and caught the parade again—it wasn't very long, actually. I think most people stayed for the five story firecracker lighting afterwards, though. We skipped that part. 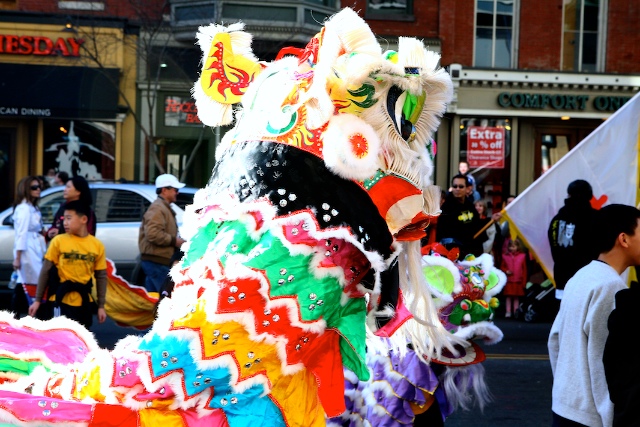 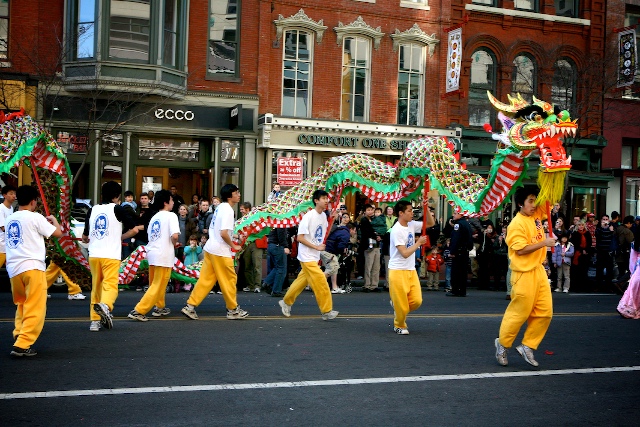 More dragons! I loved the dragons. 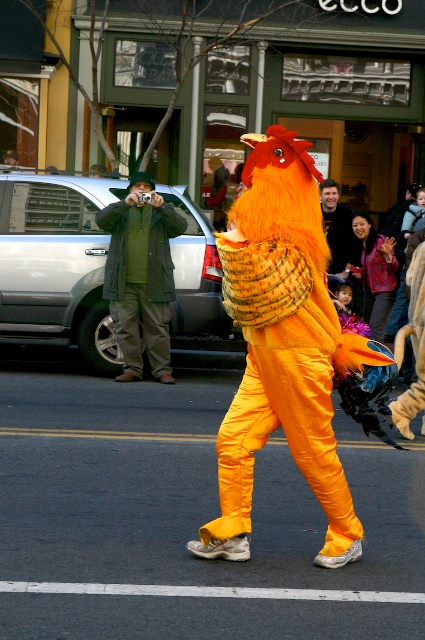 This one's for Laurel and Kaitlyn. 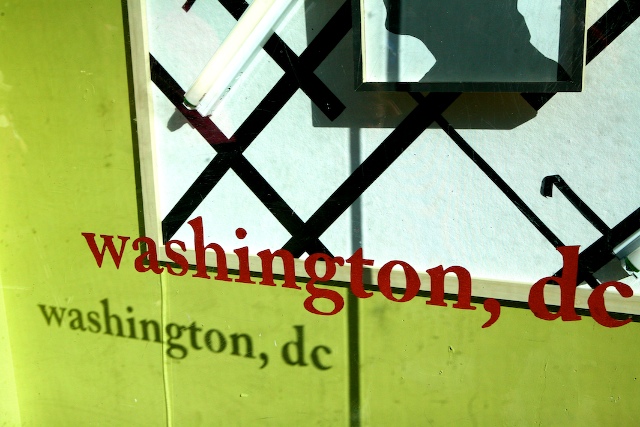 The cool window at Urban Outfitters 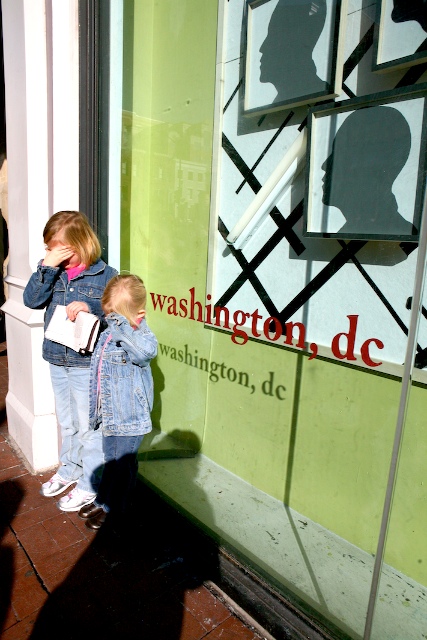 Trying to get a cool photo in front of the cool window at Urban Outfitters. It was about 58º and BRIGHT outside; poor little things appear to have just emerged from their winter caves. 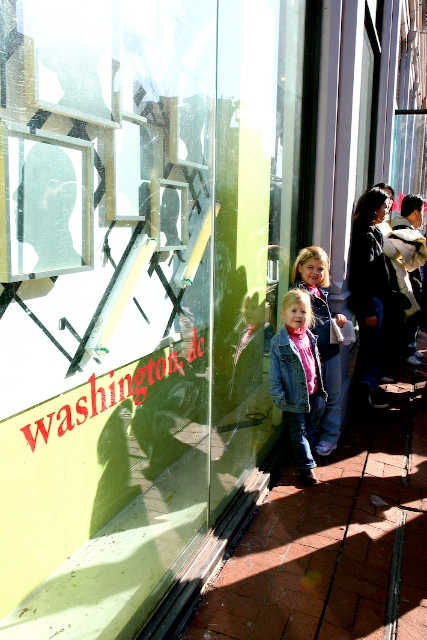 The ox is supposed to be a hard-working animal, which is supposed to mean good things for the state of the world's economy. We'll see, won't we? Happy New Year!

It's Just The Angle, Grandma, It's Just the Angle. 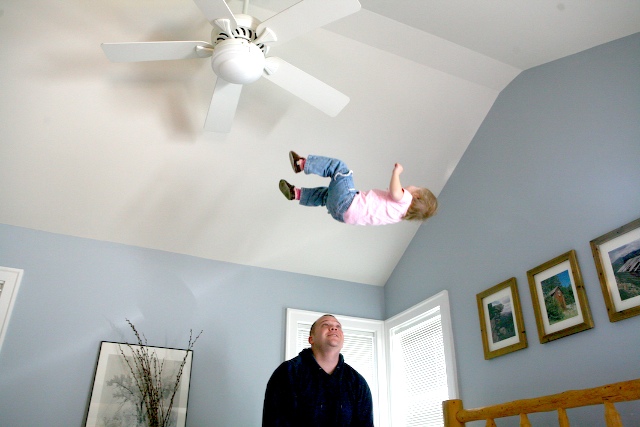 If only you could hear the baby cackling that was going on during the Saturday morning shenanigans.