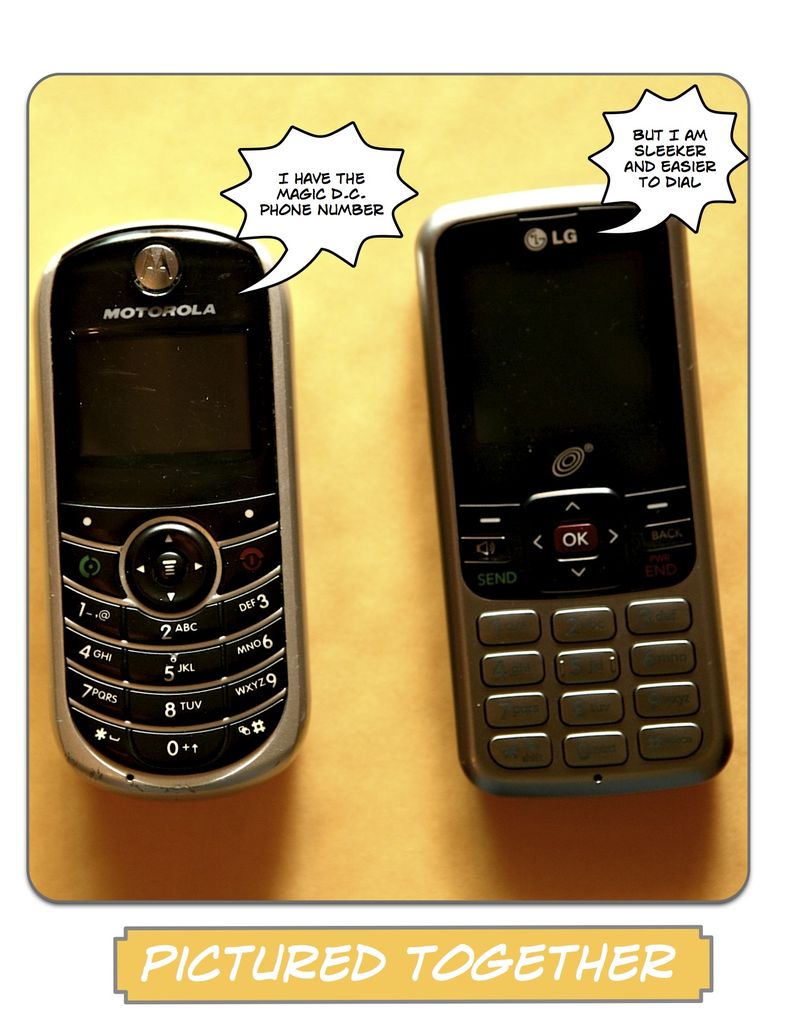 Because as Jill pointed out today, the minute something is officially declared lost forever is the minute it gets coughed up from the universe that swallowed it.

+ Lost my $10 Tracfone (so no iPhone in my future for a good long time, because I now have a new $10 Tracfone to replace it)

+ Lost my DC cell phone number in the process (sniff); careless/dumb/distracted are not covered by portability

+ picked up a skillet with my un-oven-mitted left hand that had been in a 400º oven for 25 minutes just 45 seconds before I did it (that's the end of skillet cooking for me for a long, long time)

+ new $10 Tracfone is easier to dial than old $10 Tracfone (I am really stretching here, because new multi-hundred dollar Verizon iPhone has far more notable features than ease of dialing)(sigh)

+ All other Everyday Food recipes made in the last week have been exceptional, at no risk to life or limb (and I am slowly regrowing fingerprints... I think)

+ haven't met Jackson yet, but did get to meet and hold ten-week-old Micah

+ Uhm... OK, I don't really have a balance for this one, except for that it did in fact pass just like the "this too shall pass" people always say it will.

It all works out. And eventually, there will be pictures to prove it.

Found in the Hallway 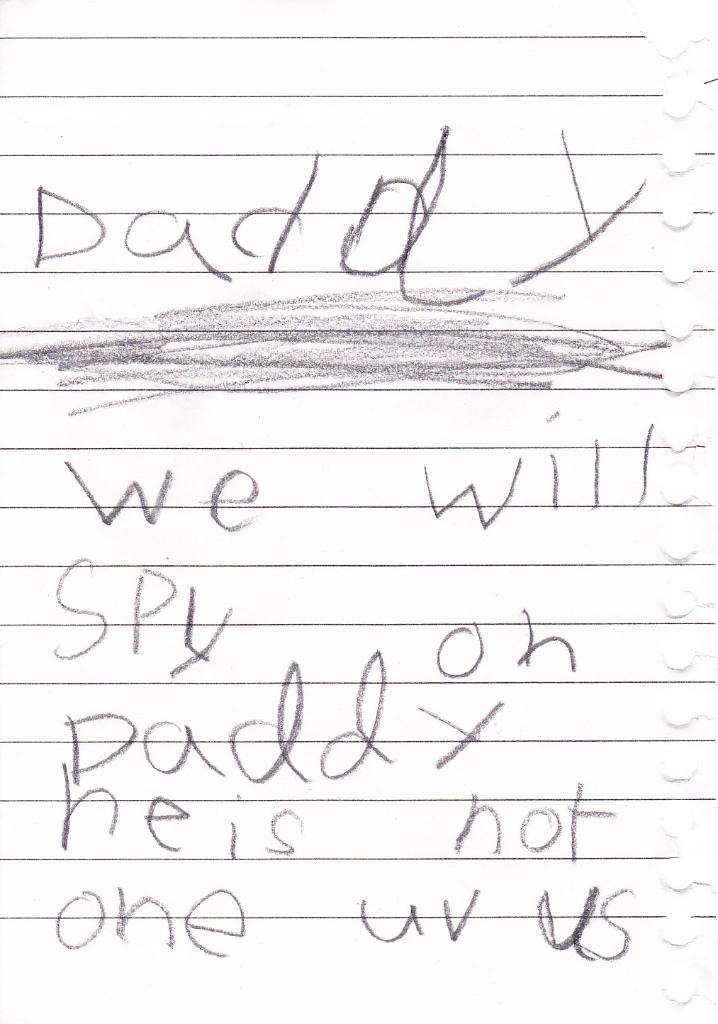 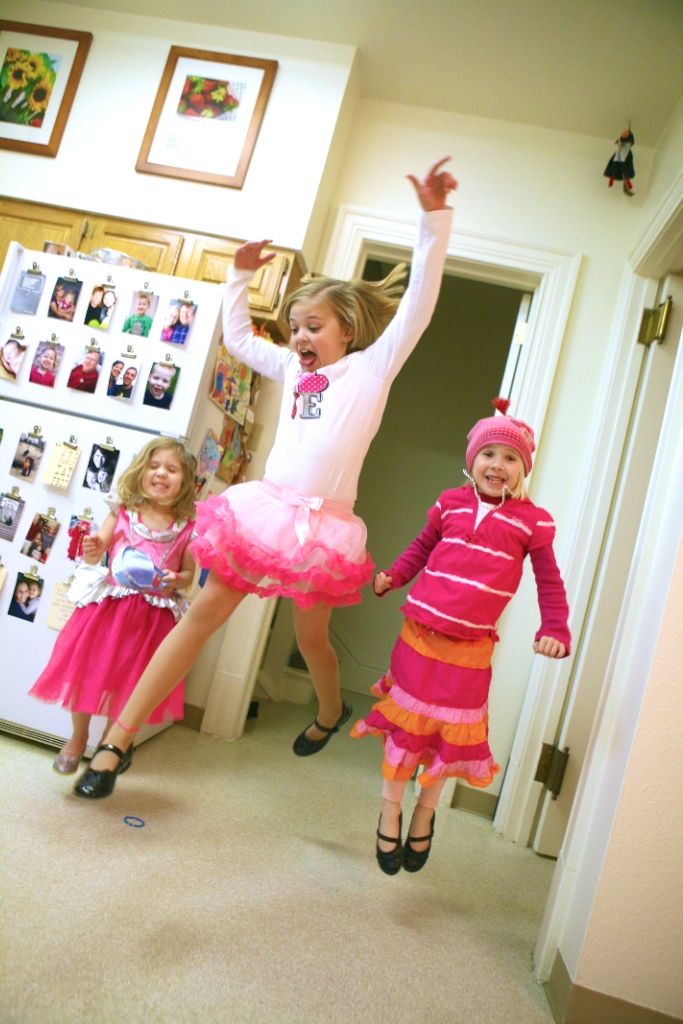 Proof That She Is Most Definitely Mine 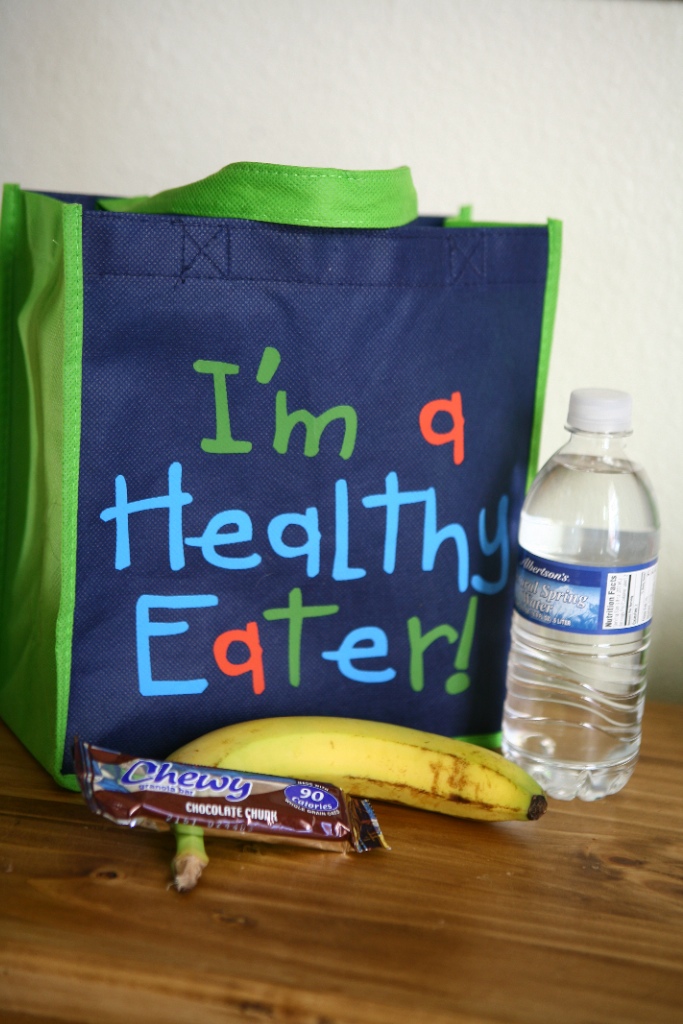 Gracie's class went on a field trip to Albertson's this week to tour the store, see a few behind-the-scenes activities, and learn about the benefits of nutrition, healthy snacks, etc. She was very excited to bring home a little bag with a banana, granola bar, and bottled water in it; she promptly ate it for her snack after school, chattering on about how fun field trips are.

I later found this in her folder—her response to the "what did you learn" question when they got back to school: There is in fact a small Starbucks inside Albertson's, and didn't Gracie do a good job coming away with the most important piece of information she learned on the entire field trip? : )

February has been a month of concentrating on whatever fire is burning the hottest; perhaps it's time for a family update! 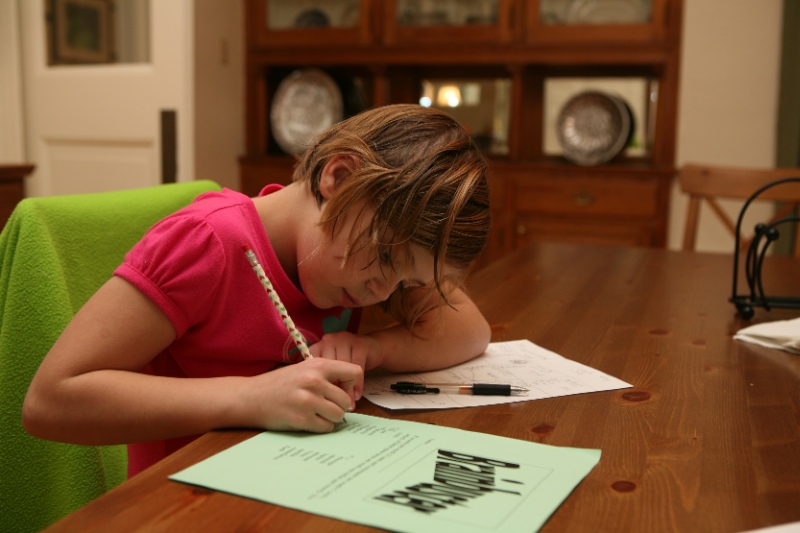 + She finished the Fablehaven series last night and came down this morning genuinely sad that Brandon Mull apparently doesn't plan to write more than five books in the series. I haven't read them yet, but she said she likes them almost as much as Harry Potter. Considering how many pages the fifth book had and how little time she's had to read in the last week, it was quite a feat to finish—but when you get a book you can't put down... well, you know how it is.

+ Has been battling some swollen knees. We've been fighting it aggressively and we're hoping it's getting better—she sat out a few nights of gymnastics last week, very reluctantly.

+ Gymnastics update: despite the sudden bum knees, Level 4 is going well. She's starting to use gymnastics jargon that might as well be Chinese to me. There is one last meet next weekend and she'll compete as a Level 3 one more time, but only because she hasn't been on the Level 4 team long enough to know the routines.

+ Has new sheer green curtains that make totally make her room. It took a long time to find the right thing. Apparently I should have looked on the Target clearance rack sooner.

+ Does not yet know that, barring bad weather, she'll get to celebrate Georgie's 10th birthday with Georgie in Colorado Springs. (Aside: SERIOUSLY? How can Georgie be turning TEN??!?)

+ She thought the Volkswagon Passat commercial with the little boy dressed as Darth Vader was hilarious; it's fun that she's starting to get subtle humor like that. She still has no desire whatsoever to see Star Wars. We are not really a Star Wars household, but I think every American should at least see the first three. Right? 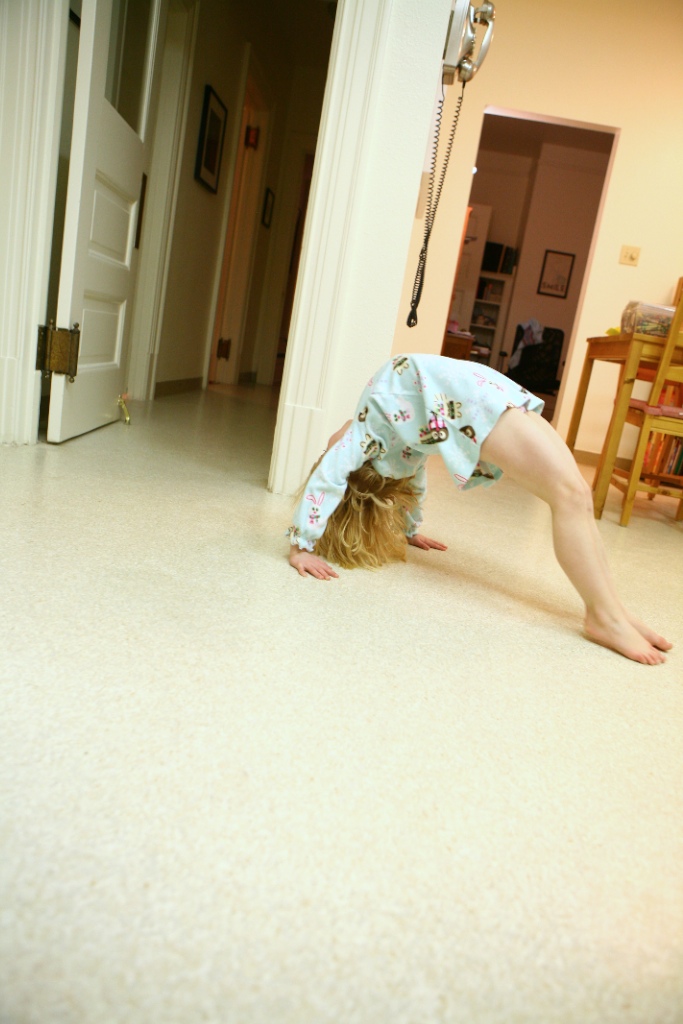 + Gracie still loves, loves, loves kindergarten and her teacher, too. Her behavior chart clothespin has remained on green (or silver, the bonus upgrade) for 100 days. (Maddie too, for the record). We worried a lot about that for years, but clearly we shouldn't have. She is as much a rule-follower at school as Maddie. Now at home, I would say that's not always the case... : )

+ Despite all our hand-wringing about her skipping Level 3 and moving straight into Level 4, she is doing just fine in the world of big girl gymnastics. Her hands aren't quite big enough to do all the bar skills she needs to know in the fall, but her form everywhere else is knocking everyone's socks off. 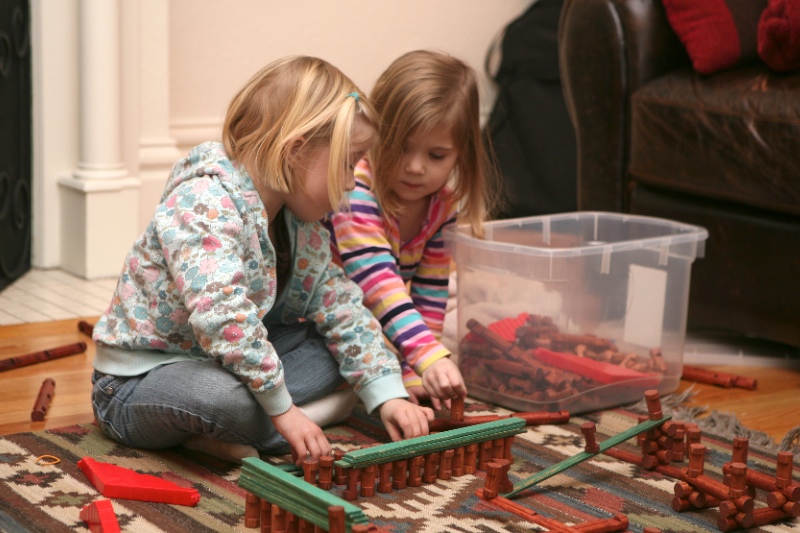 + Gracie and Bridget have been playing well most of the time lately; they've discovered the world of Lincoln Logs (finally!) and have been building lots of interesting things with them in the last week. The things they build are most definitely more creative than the things I built with Lincoln Logs 30 years ago: I built log cabins. They build parks with slides and construction workers and gymnastics floors and beams and vaults.

+ She is moving out of the "emerging reader" category and wow, is it ever easier to sit and read with her compared to a few months ago. No more getting frustrated and wanting to quit (or not even try). She has a reading log that comes home every day with a simple beginning reader and loves having homework to do.

+ Is super-excited that The Electric Company began its new season yesterday (OK, OK, all the Dillow girls are. Including me.) I haven't had the heart to tell them that I read that Fetch got cancelled due to lack of funding. They love Fetch. They were plotting how they could one day be contestants (unfortunately, the distance to Boston was a problem they couldn't figure out...) 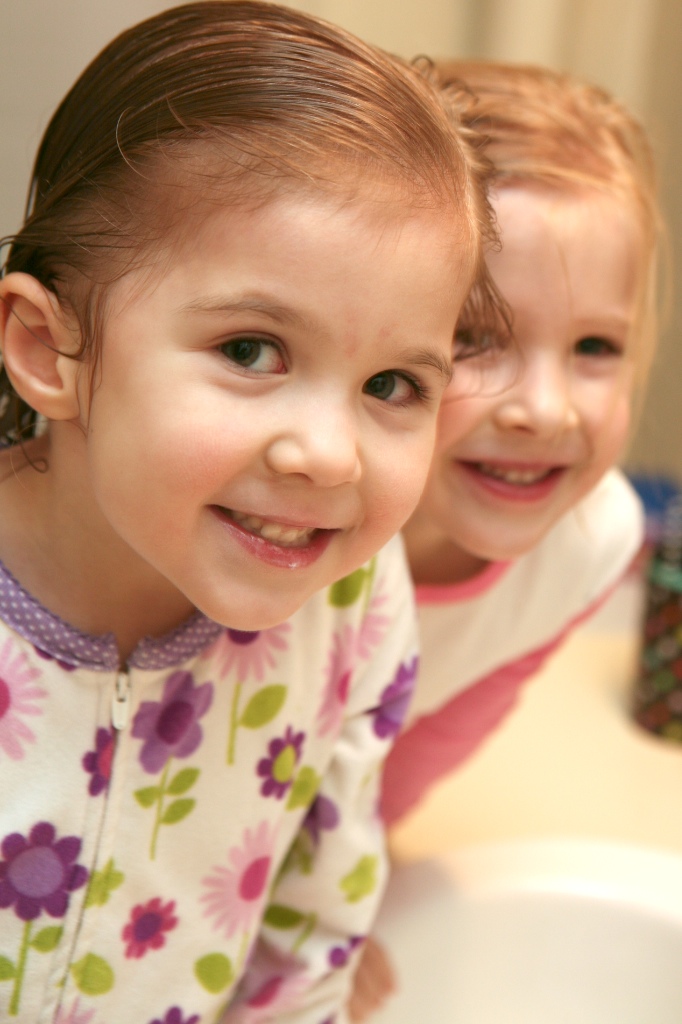 + Bridget is just a few months shy of four, and it's hard for me to think of her as old as Maddie seemed when Maddie turned four. She is super-sweet when well-rested, and super-argumentative and nasty when she's not. She can't make it through the day without a nap 99% of the time, but we've entered into the era of naps resulting in her being up very late. She mostly entertains herself in her bedroom playing with her princess and prince dolls.

+ I have never known a child to love princesses as much as this one does. She has a mental catalogue of all the princess things she has and does not have; I'm supposed to be on the lookout for a doll of the witch from Snow White, Pocahontas, and the genie from Aladdin. She tells me regularly that all she wants for her birthday are those three dolls plus Princess and the Frog on DVD. I'm not sure the witch and the genie exist, though.

+ She enjoys preschool immensely; she is only going five hours a week, but it was the right choice.

+ She made her Valentines tonight for her preschool party; she was over the moon that I let her operate the die cut machine all by herself (we made last year's Dum-Dum flowers again). She kept saying she was pushing with "all her might!" and that she "had a little might left" to push with. Hee hee.

+ Suddenly has zero pairs of shoes that fit, but not for the normal reason; her newest grade of orthotics won't fit into any of her shoes—they aren't deep enough. This is presenting a real problem, because the next size up is too long. She is clopping around in a pair of too-big shoes inappropriate for the season this week. Something better must be done soon. 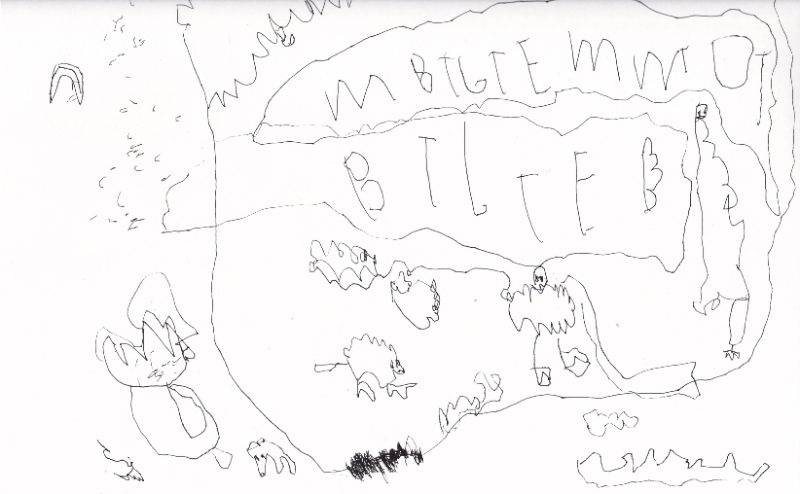 + She drew this tonight; look for the hedgehog, the mouse, two monsters yelling scary things, and a hatched egg. She described them all in detail when she was finished. Boy, do I ever love watching them develop their drawing abilities. 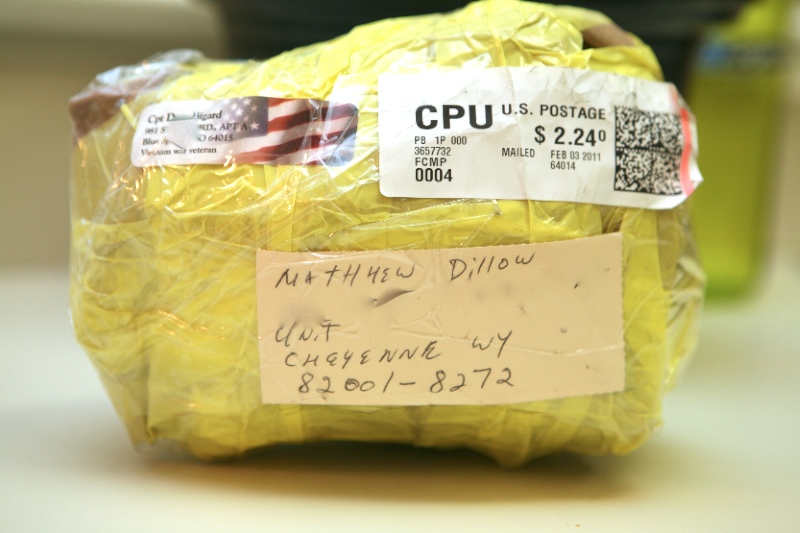 + Received what only could be described as a dinosaur egg in the mail yesterday. (It was a truly weirdly packaged Gillette razor from the early 1900s). Matt's collections afford us the opportunity to get some really interesting mail. : )

+ The missile wing inspection began yesterday, which means a long stretch of very long days coming up. But, so far so good.

+ Cheered unapologetically for the Green Bay Packers on Sunday night. If the Browns can't be in the Superbowl (ha ha ha ha what an "if" statement that is) than cheering for whoever is playing the Steelers is the next best thing.

+ We've been watching a show together called Gold Rush Alaska; he got me hooked on it after the third episode. It's a strange show to have for TV date night, but it's really good. He has no plans of cashing it all in and moving to Alaska to mine for gold, but we sure are rooting for the guys that have done just that to strike it rich.

+ Would very much like a week at the beach; he was even wistfully looking at rental properties recently. As if we'll be able to get away next summer for a vacation between change of command and Frontier Days : ) It's nice to have a dream, though.

+ Recommends Charles Bradley for your next interesting music purchase. And Mignonette by the Avett Brothers. Somehow we missed buying that one in our Avett Brothers buying spree last year.

+ I need a new, approved photo of myself with short hair.

+ My 52 Projects album is way behind. I have new things to add, but am missing a picture of one of the projects I did a few weeks ago at Write.Click.Scrapbook. and don't want to post out of order. (I'm stating this as a reminder to myself, mostly, to get on it.)

+ It's scholarship auction basket time again! I fully intend to use both baskets I'm in charge of putting together as part of my 52 Projects even though I used last years' baskets, too. It's hard to believe a whole year has passed. This year's theme: frogs and France. Both for kids. My pal Francine is helping me with a few items, directly from France. I am an over-achiever, I know.

+ Looking at the calendar over my shoulder I see: preschool Valentine's Day party, two scrapbook-related meetings, volunteering for the Judges' Cup meet, figuring out how to get Gracie to a birthday party the same day as the meet (she isn't competing, but volunteering as a runner), Maddie's book club, two small people drs appointments, a trip to Colorado Springs, two baskets + a silent auction donation to finish up, WCS monthly work, the base awards banquet, the scholarship auction, and my book club. This is on top of the regular ferrying about of children, household chores, and sleeping. And I bet I've missed a few things. EEEEEK. This is February, not May. Should I consider it an omen?

+ But here's the thing I've been working the hardest on this week: 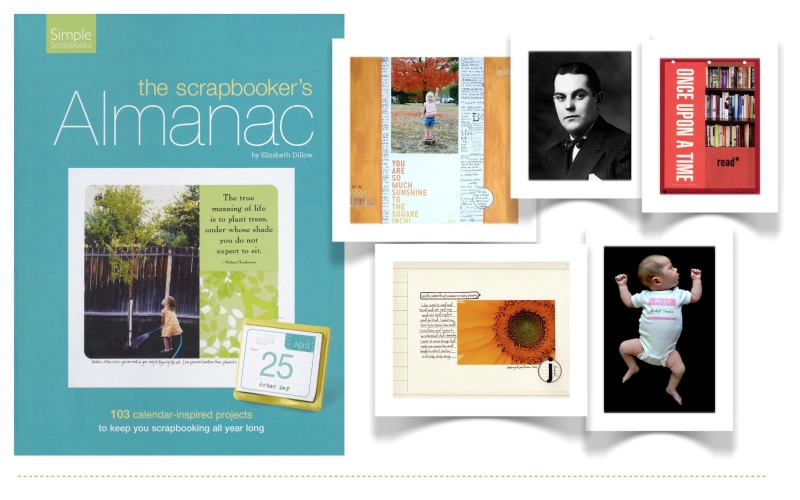 After a long and complicated tale that I won't bore anyone with the details of here, I finally have a storefront ready to go to sell the limited amount of books we were able to secure from the new owners of CK Media when they liquidated my book inventory. I'm very excited about the opportunity to offer the books for sale myself; if you know anyone that would like a copy please encourage them to visit here vs. trying to track down a copy on Amazon or Ebay or whatever. When you buy from me, you'll get more fun mail : ) Click on the image above to find it. I'll be making a few changes to this blog to better represent its availability soon (you know, in all my free February minutes). Spread the word—I really appreciate it!