Maddie, Gracie, and Bridget spend a combined total of 26 hours per week at the gym. That does not include driving time. Or fixing hair time. Or finding the #$@%& hair brush so we can actually fix hair time. During competition season, that total climbs much higher. It's a 50 weeks per year sport. People look at us with perplexed looks on their faces sometimes, because... well, what? How does that even work?

I've written here before about our gradual commitment to gymnastics—how it was a fun thing to do to burn off some energy in the middle of a Colorado Springs winter when Maddie was 18 months old, but how unlikely it was that she'd still be doing it down the line. It's probably safe to say that at nearly 11, we're down the line. Gracie and Bridget first experienced gymnastics from the vantage point of their infant carseats; Gracie got a late start in her own class at 2.5, and Bridget? Enrolled since she could walk. Literallly. She didn't take her first steps until 17 months old, and has been at the gym ever since. Every so often we ask them if they want to quit gym to play sport x, y, or z; the answer is always NO. We squeeze in piano, but all other structured after-school activities are pretty much out in the Dillow house. 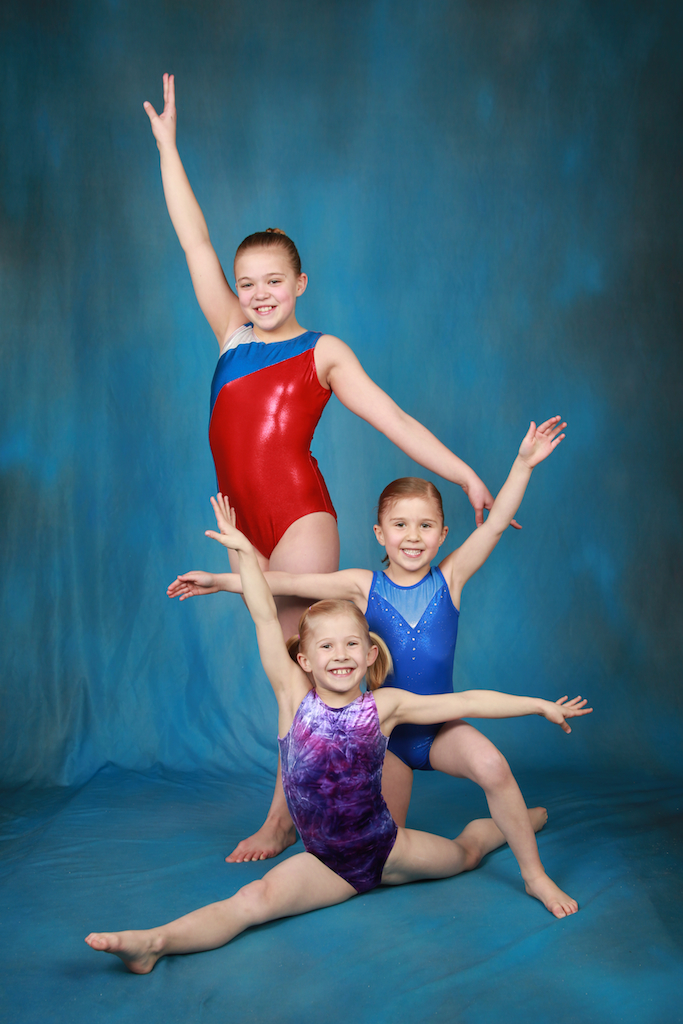 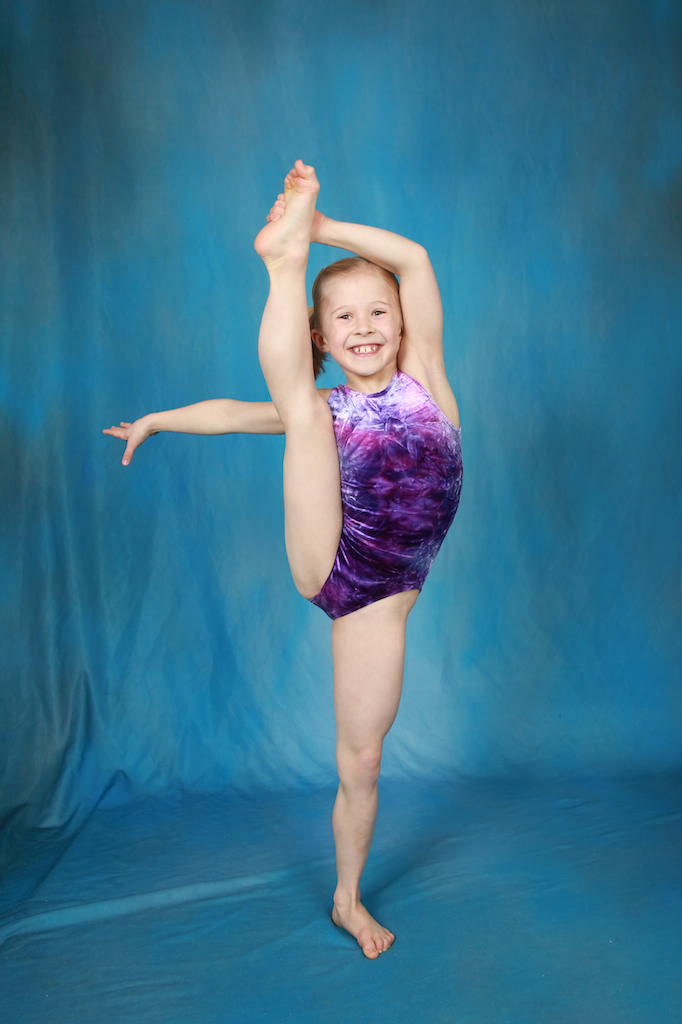 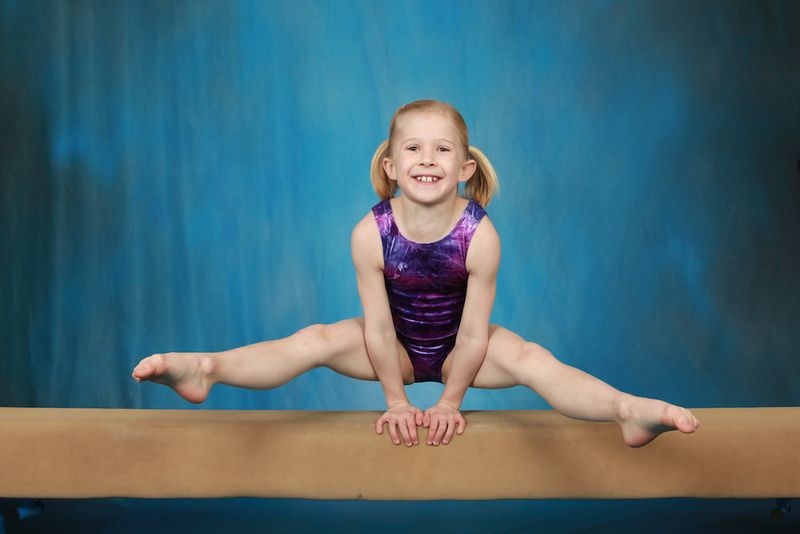 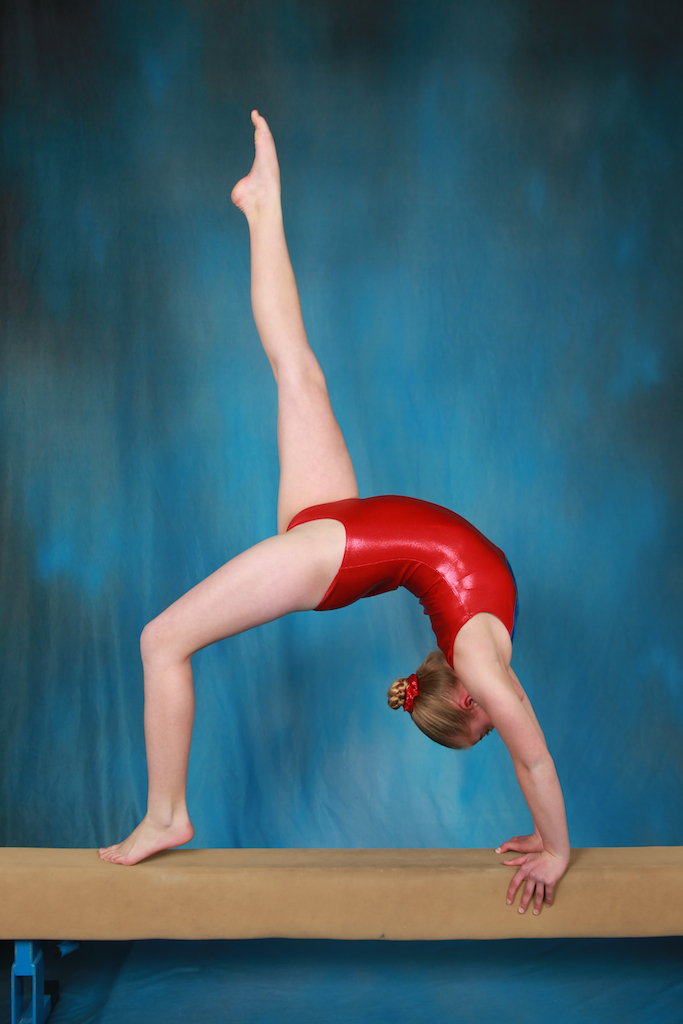 Maddie still shakes her head and scoffs at her lame-o mama who quit a short-lived gymnastics career following a fall off the beam in the 3rd grade. 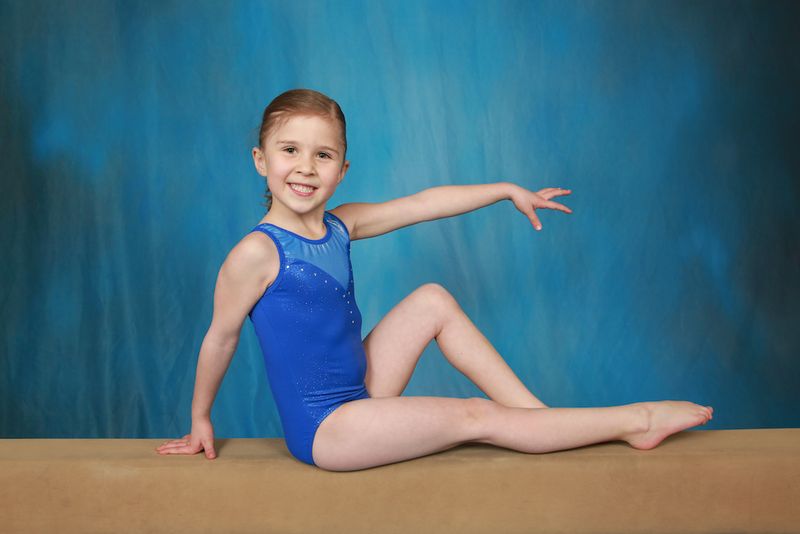 Bridget used to fall down at least 10 times a day; now she can walk across the beam completely unassisted. It's really nothing short of miraculous. 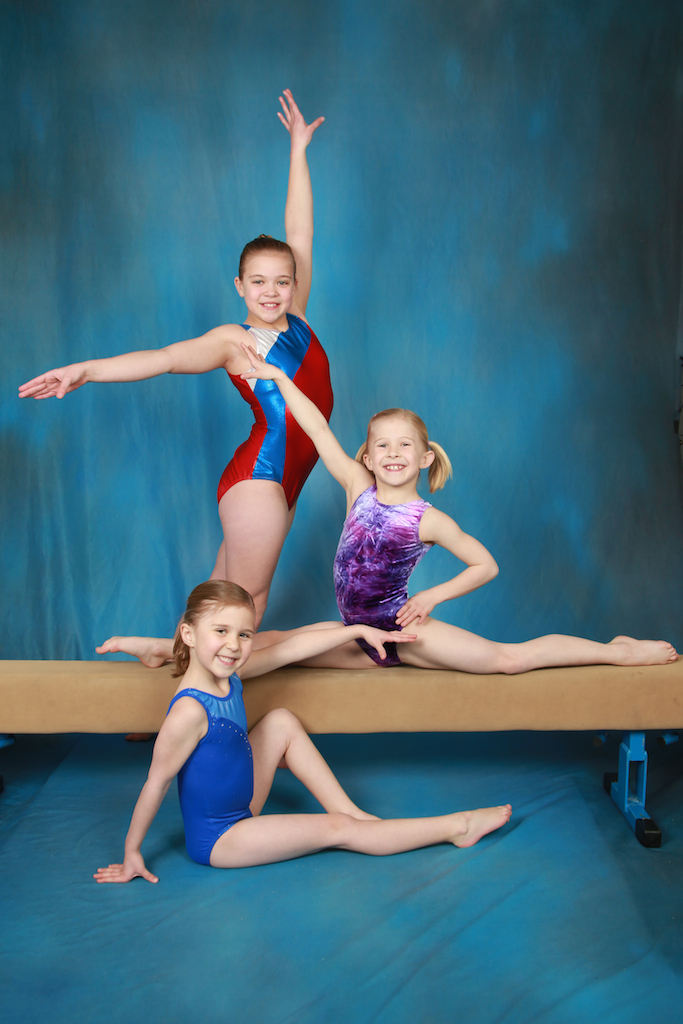 We're realize now it's best not to make predictions about what's down the line as far as gymnastics is concerned. As long as they feel this way about gym, we'll just stick with the short answer and keep on going.

All photos courtesy of ImagingB Photography

...aka the only day I can pull off this photo stunt (and have done so for three straight years now): 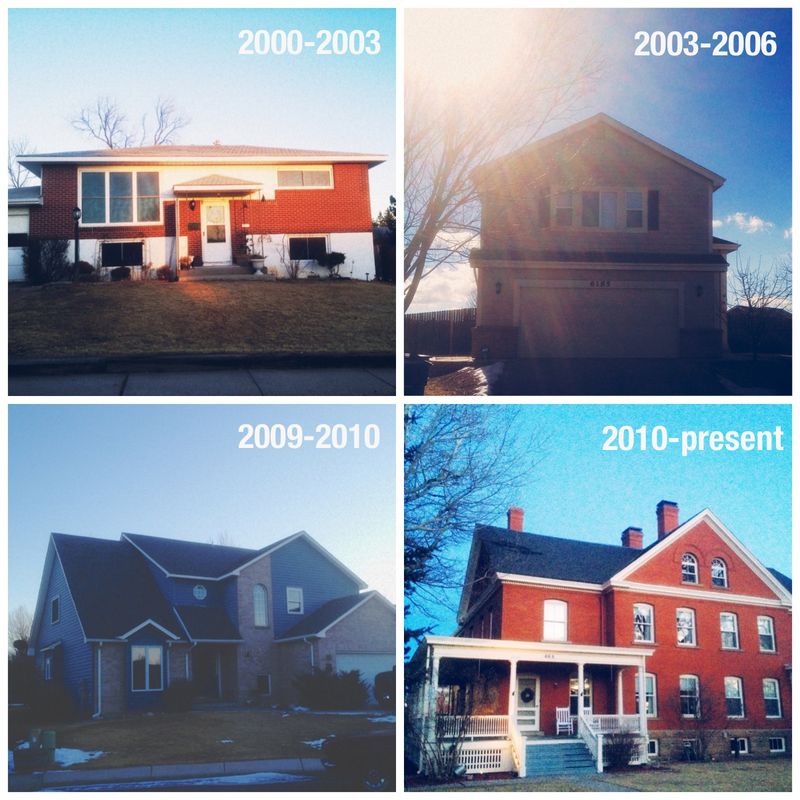 How do you celebrate Presidents' Day? : )

oversee the making of 61 homemade class Valentines
attend Maddie's book club
coach the 5th and 6th place finalists in the county spelling bee
have a two hour review meeting with Wyoming Department of Revenue
successfully complete taxes (OK, I had very little to do with this one except fetch documents)
have lunch out twice in town with husband who probably won't get to take a day off again until August (maybe)
have a Valentines Day date in Fort Collins with said husband
get way overdue new brakes for van
get tooth extraction and cleaning done for poor rotten-toothed rescue dog
work on quite possibly the most amazing class I've ever developed for Big Picture Classes (coming this summer)
work on content for my portion of another really amazing class for Big Picture Classes (coming end of May)
take annual road trip to Colorado Springs for favorite almost-twelve-year-old's 12th birthday

Because these lists are clearly mutually exclusive in the time span of 7 days. 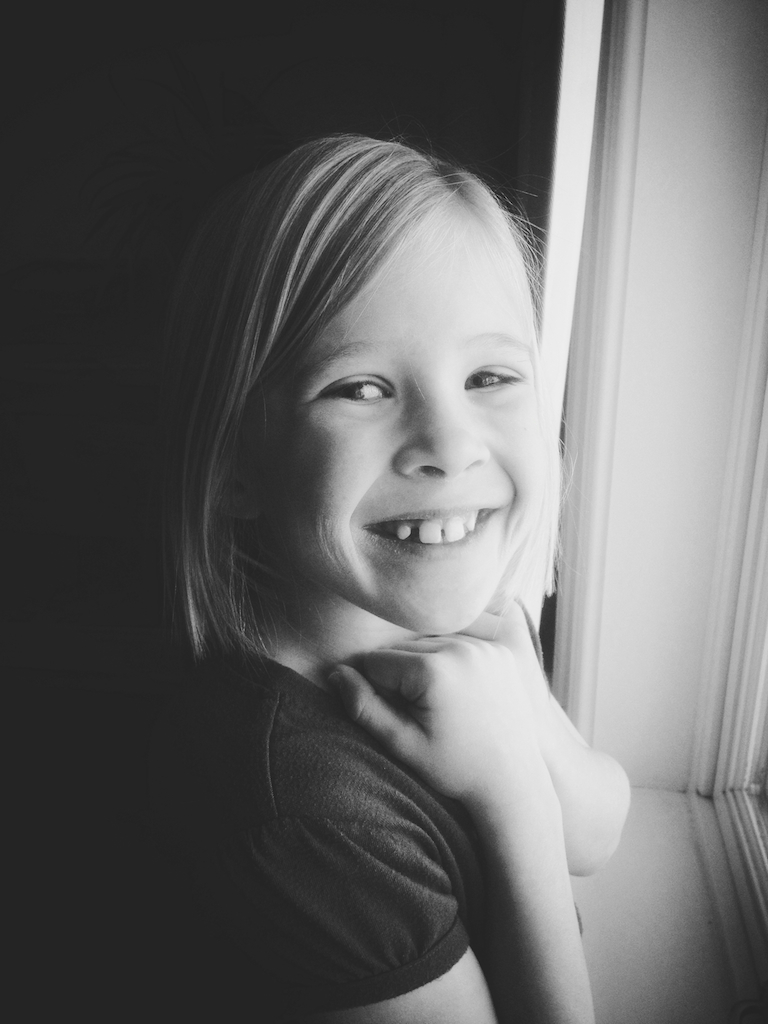 I loved reading everyone's responses about their most memorable English teachers... especially my borderline-delinquent mother's 8th grade memory, haha. : ) The story I tell most about an English teacher: my junior year of high school I had my least favorite English teacher, Mrs. Jensen... she happened to have been an old colleague of my teacher parents, so I always had to be on my best behavior despite the fact that I didn't much care for her. I did accidentally break some precious glass teacher gift thing on her desk once with my backpack and I felt terrible about it. She did, however, introduce me to one of my all-time favorite books, Davita's Harp by Chaim Potok. Go figure : )

Random.org picked lucky #8, which happens to be...

Melinda T! I'll be in touch with directions on how to get ready for your new favorite writing instructor, Angie Lucas. : )

I think I've made the point over the years here about how once-Scary Angie Lucas became Not-Scary Angie Lucas, a great friend and excellent houseguest. She is smart, witty, sharp, and writes about grammar in a way that makes me impatient when she doesn't write about grammar on her blog (HINT HINT). So what in the world is she doing teaching Grammar-Free Journaling, her first-ever workshop for Big Picture Classes? 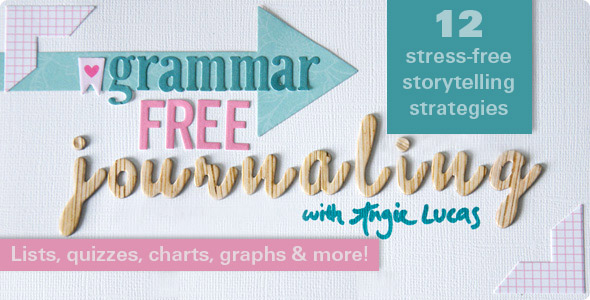 Because she's equally good at writing without traditional structure, complete sentences, and conventions—and passionately believes in helping others to write about their lives with a variety of different strategies. I was always amazed at the ideas she suggested for my Write from the Heart column at Simple Scrapbooks (RIP) because they weren't always about writing with sentences and paragraphs. The pages I made for that column are among my favorites!

Here's a little bit more about the class in Angie's words:

Also: be sure to read the full description, because you might recognize some of the guest scrapbookers that will make their debut over at Big Picture Classes : )

Would you like to win a seat in Angie's class that begins on Valentine's Day? I have one to give, so leave a comment recalling a brief memory of your favorite (or least favorite) English teacher (or whatever native language/writing/literature teacher you might have had, as this giveaway is open to internationals, too). Comments will close Friday night. Good luck!

Most random activity of the day—and probably for all of 2013 as well:

I just scanned a pay statement from Great Falls Public Schools that shows my old address so I could claim a $100+ refund from Epson from the state of Iowa in the Great Iowa Treasure Hunt.

1.) See, it pays to never throw anything away (haha)

2.) I can't even remember the last time I bought an Epson product, but it must have been in Montana

3.) No, I have never lived in the state of Iowa—your guess is as good as mine

Just one of the many benefits of being married to the Ebay King, a.k.a. The King of Finding Weirdo Information Online While Eating Lunch. Here, maybe you can benefit too : )

The novelty of this renting WHATEVER WE WANT on Apple TV is never going to wear off. : ) And yes, we actually watched two things last night, because there was no gym pickup and Maddie was at a sleepover and the other two had their own sleepover in Gracie's room and we were able to start watching before 8:45 pm and it wasn't that long of a movie, so at 10:27 we decided we had it in us to watch a 67 minute documentary to round out the evening. Movie heaven!

Movie #1: Sleepwalk With Me 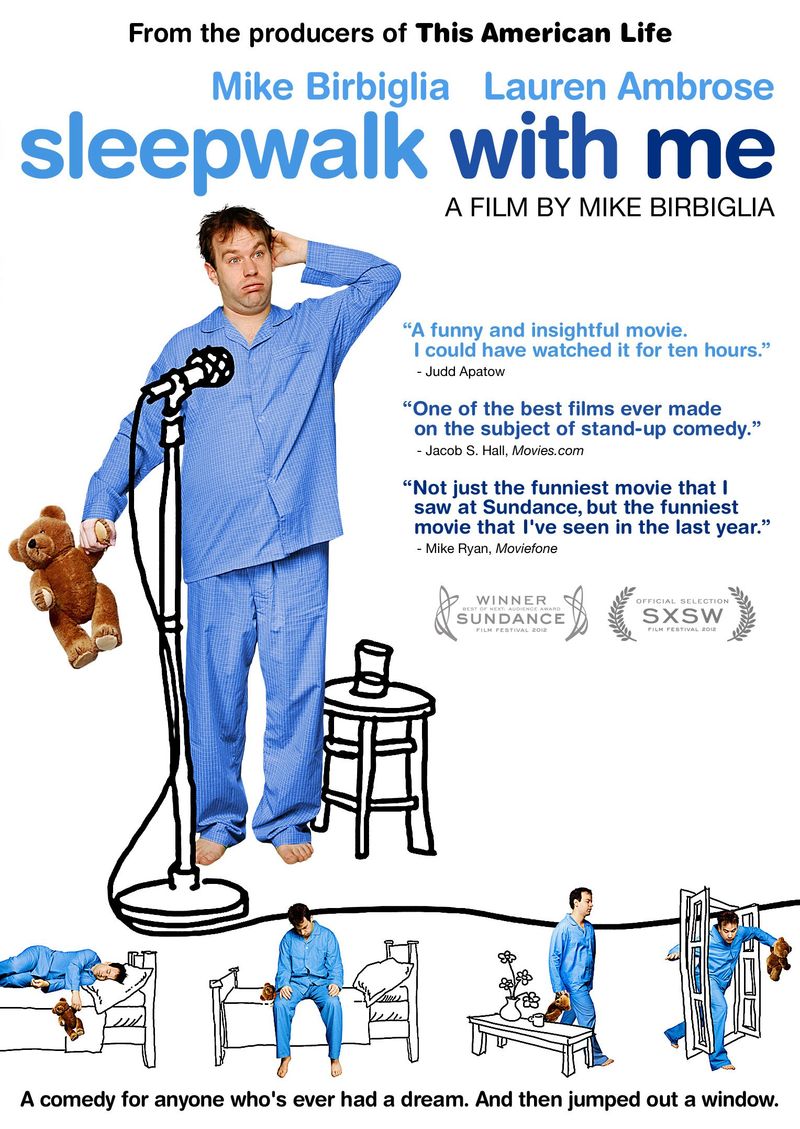 It was really, really, really good. And best of all: it's so good because it's based on Mike Birbiglia's life as a struggling stand-up comedian, struggling partner in an eight-year relationship, and struggling victim of a terrible sleep disorder called REM Sleep Behavior Disorder—but lest you think it's all doom and gloom and struggle, it isn't; it's actually really funny, and you immediately feel compassion for him, his wonderful girlfriend, and all the plights going on throughout the movie. He originally performed this as a one-man off Broadway show, and turned it into a film that won lots of accolades at Sundance and was generally received as one of the best, funniest movies of the year by critics. Ira Glass produced it (and played the wedding photographer, look closely!) and it definitely has the feel of something that you might hear on This American Life.

Without giving it away, there are moments where you just get wide-eyed and start to cringe and nervously giggle all at the same time, because it's just so... awful. It's a special gift to be able to pull off a portrayal of his condition with humor but also to completely capture the frightening seriousness of it, but he does that, very well. It ends as it should, which is to say, you feel a little sad but also "how can I be sad when it ended as it should." It's always a good sign when you feel absolutely content at the end of a movie, I think.

___ Edward Sharpe and the Magnetic Zeros

___ the idea of traveling across the U.S.

If you checked even one item on the list, I think you will like the second movie we watched last night: 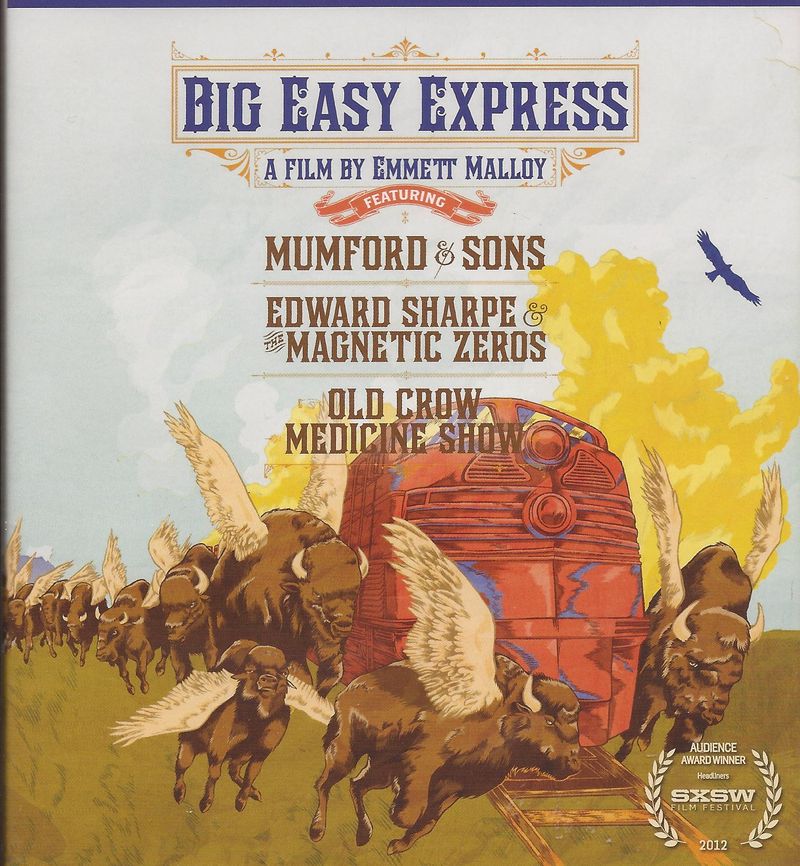 It's a documentary that follows a 10 day train tour of Mumford & Sons, Old Crow Medicine Show, and Edward Sharpe and the Magnetic Zeros from their first stop in the railyards in Oakland all the way to New Orleans, stopping along the way to perform concerts (and playing inside the train pretty much the rest of the time). These people (and there are a lot of them that make up these three bands) love music and it is a joy to watch them perform, though both Matt and I agreed that we liked the more informal performances (on the train, in the middle of the desert, in a high school band room) even more than the concert footage. We also agreed that we probably prefer to listen to Edward Sharpe and the Magnetic Zeros perform vs. watching them, but that's just us.

When I recommended this to Marie last night, I also told her I'd give her $10 if she didn't burst into tears (or at least get really, really weepy) at the part where the Mumfords stop in Austin, TX for a rehearsal. I don't want to ruin it for anyone that will watch it, but if you come from any kind of band instrument-playing childhood, it will be touching. Matt was giggling at me, but I know his tuba- and clarinet-playing heart was touched, too. Heh. At the end I very abruptly got all Veruca Salt-like and told Matt I wanted the painted signs from the movie. As in, DON'T REST UNTIL YOU GET THEM FOR ME. Poor man. It would be easier for him to present me with a squirrel.

An interesting aside: Mumford & Sons, first recommended by my friend Mary, was not a band I immediately fell for. Chalk it up to the list of things I didn't used to like (as much as I should have) but now I think are (better than) OK.

Tell us what you think if you rent these, too : )

So I've been keeping a running list of the best little videos I've seen online over the past year... some really, really good/funny/thought-provoking things... and of course now I can't find the notebook I wrote it in. I have many notebooks going at once—not unlike giant post-it-notes I leave all over everywhere—which doesn't really say much for my organizational skills, but it is what it is. Since my deadline for these best-of posts is Oscar night, I will simply recreate as much as I can from memory and add the rest later if I ever find the right notebook : ) Pop these out to get rid of Typepad's suddenly annoying margin cut-off.

I can't get enough Casey Neistat videos (remember? He of the Neistat Brothers show on HBO?) I recently read that his largest fan base comes from the 14-24 year old boy demographic. HMPH. Whatever. He's a scrapbooker through and through. I save watching his videos for when I need a five minute mood boost.

2. Is Instagram the Best Thing to Ever Happen to Photography? by PBS Idea Channel

I love this quirky Idea Channel from PBS that I actually figured out how to do the subscribing thing on YouTube. I am not really a YouTube user, unless someone specifically points out something I should see over there. And then I watch it repeatedly.

I won't tell you how many times this was watched in our house this past year. Many, many, many times. As many as the panda sneeze in 2007.

5. The Christmas Chicken by the Pershey Family

Posted by Elizabeth in Best Of, Movies | Permalink | Comments (5)