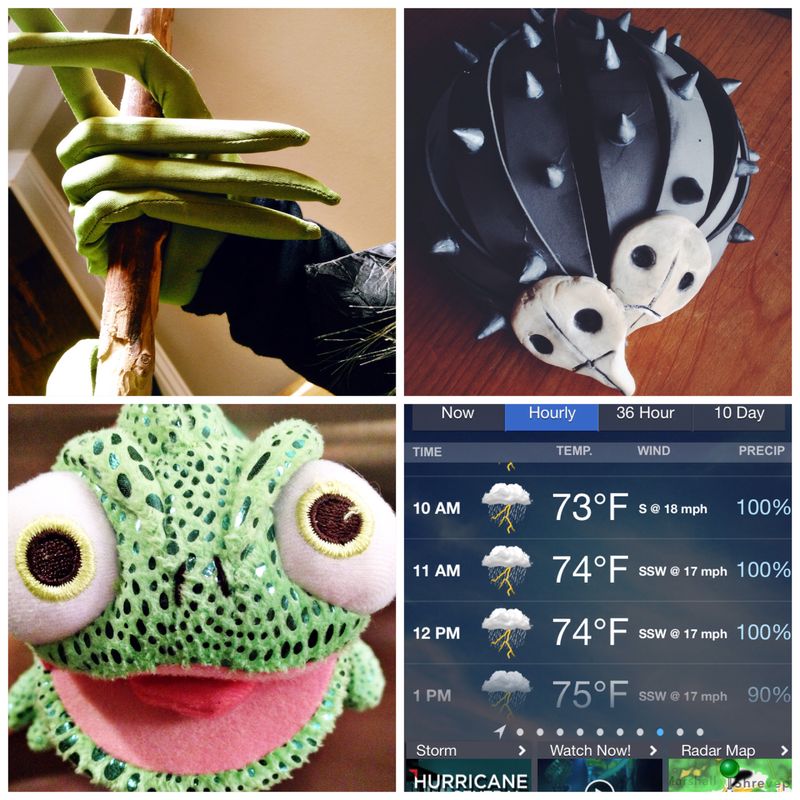 This rain really needs to clear out by the afternoon. And not just because one of the characters pictured here will melt if it doesn't. Photos to come!

Gracie's vocabulary sentences are the best. No one is safe—not Ellie, not the U.S. Government, not the mysterious William (who?). Well, I'm safe. At least this week. 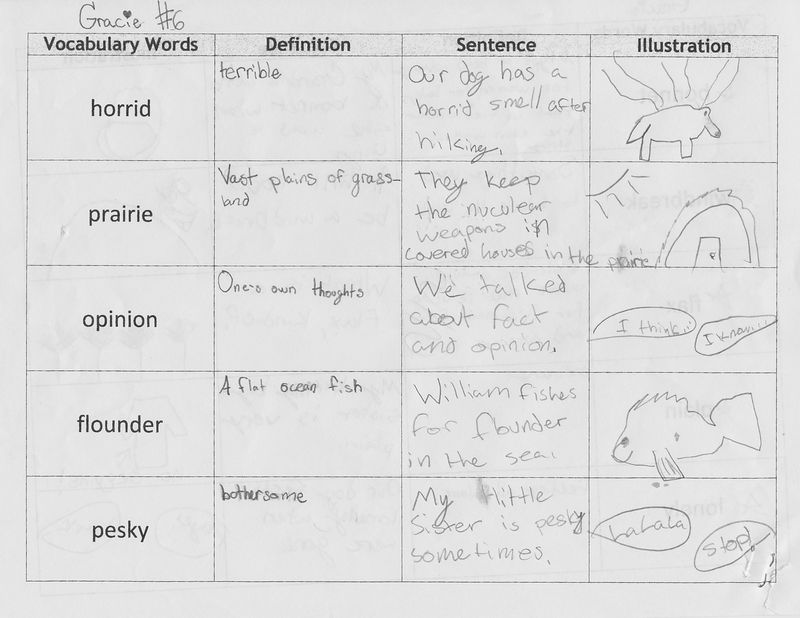 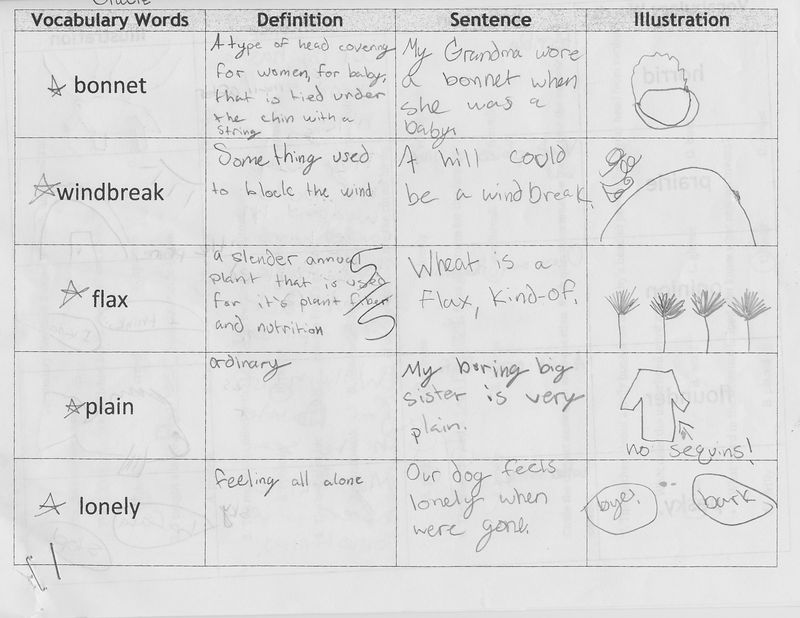 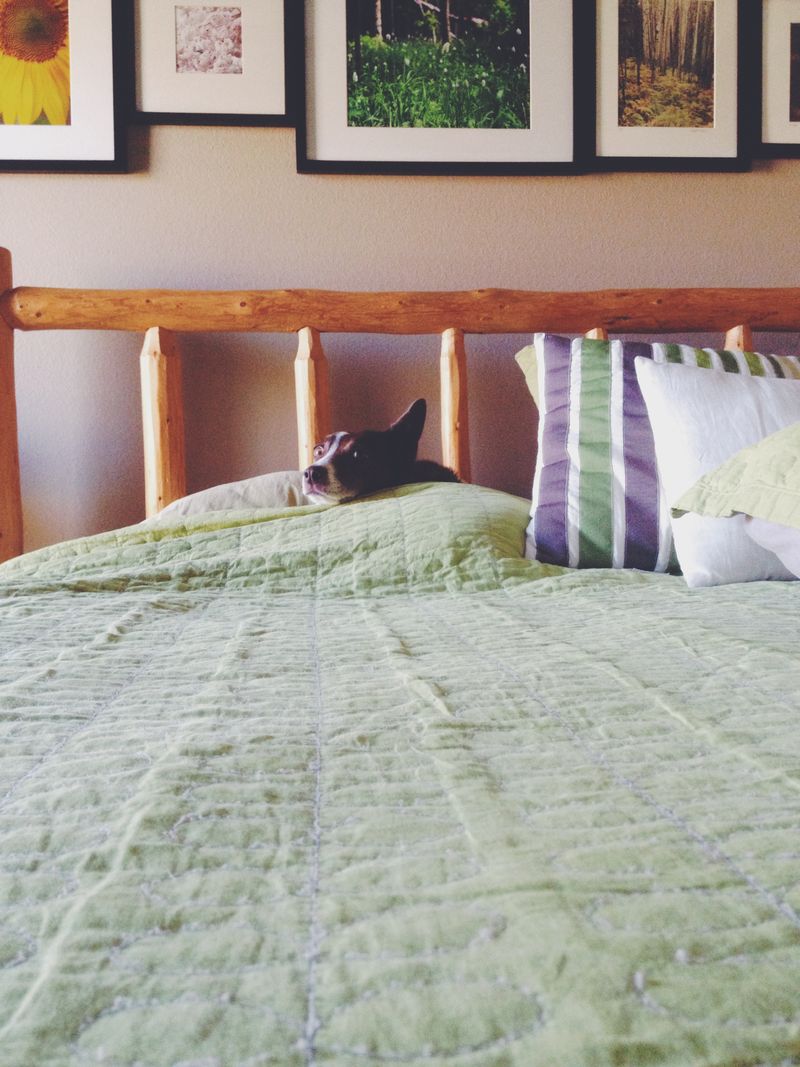 I was trying to make the bed and she wouldn't move, so I just made the bed around her thinking she would surely get annoyed and jump off. Like everyone else in this house, she has a mind of her own. And yes, we love her so.

Where Wyoming and Vietnam (and Louisiana) Intersect

Not too long ago I saw a story linked through Facebook from one of the Wyoming pages I follow about Buford, which is well-known throughout Wyoming and beyond for being the smallest town in the U.S. (population 1). It's about halfway between Cheyenne and Laramie; I've always been kind of in awe of it ever since the first fall we lived in Wyoming back in 2000 and the wind was clocked at just over 100 mph one day in October. In some places that's called a hurricane, but in Wyoming it's just... really windy. The owner and sole resident put the town up for auction in 2011 and someone from Vietnam of all places bought it—but instead of immediately reopening under new management, it was boarded up for a long time. I stopped to get gas and a drink on the way back from UT in March and it was still closed down. Gah.

In September, Buford reopened with a slightly new name: PhinDeli Town Buford. It's an interesting story, which you can read here. It's one of those stories that is almost too weird to be believed, but very touching—especially the part about how the former owner Don Sammons, a Vietnam war veteran, now has an entirely different relationship with the country due to this unexpected new development in his life. That kind of story is always among my favorite kind because it serves as a reminder that you just never know how things will turn out.

So now Buford is the smallest town, a restored gas station/convenience stop, and a coffee shop/sole physical presence for PhinDeli coffee, which was the whole point of why the new owner Nguyen Dinh Pham purchased it in the first place. Of course I had to buy some from Amazon, the only other place it's currently available. 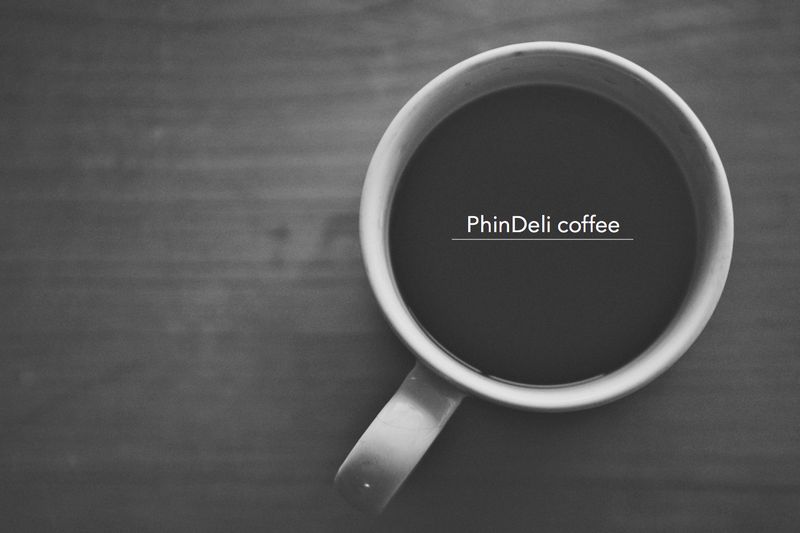 I ordered a 7 oz. box of the Espresso whole bean variety recently as an add-on item from Amazon; it's a little expensive ($8.25) but still waaaaay cheaper than if we had a Starbucks habit, as it will last the two of us more than a week. I have the coffee maker set to turn on at 5:53 am (oddly specific) and when I dragged myself out of bed this morning at 5:55 am (terribly unfortunate) the kitchen definitely smelled better than it normally does. Neither of us drinks black coffee as we like to ruin it (well, coffee purists would say we're ruining it) with flavored creamer, but even underneath the creamer I could tell it was very good. I am happy to occasionally add on our support of this Wyoming/Vietnam connection that is so peculiar but also pretty brave. Can you even imagine the leap of faith it would take to buy a town in a foreign country where sometimes the wind blows at 100 mph? Right.

How To Make a Poodle Skirt

So back at open house in August (seriously, it still makes me shake my head that the girls started school on August 8) Bridget's teacher announced to the parents in attendance that we needed to be ready for the First Grade 1950s Day in October. As we had already spent enough on school supplies and uniforms to practically put someone through a semester of college, I decided I would NOT be buying a 1950s outfit but would make one myself. And then I promptly didn't do that until a week before she needed it. Unless you count the butterfly wings, I have never made anything that someone is supposed to wear. And I certainly have never made anything that someone has to wear that is intended to cover up her lower half. No pressure or anything.

Armed with Pinterest and resolve, I read through lots of tutorials and settled upon this one, which is based on another one, but looked relatively doable. I still had to have Matt double-check my work with some of the pattern stuff (when you read the tutorial you will wonder exactly how slow I really am, to which I will say: you have no idea when it comes to pattern stuff). Really, though, it's a pretty easy thing to do in hindsight. The whole idea revolves around having a cheap-to-make skirt with no seams. It was originally created by Juli Lynne Charlot in 1947 for a Christmas party—felt was the only material big enough to cut a skirt with no seams—and had Christmas appliqués on it. She later created a dog-themed skirt, and the rest is 1950s history. My mama had a poodle skirt (I wore it once for a costume party in middle school, I think) as did Matt's aunts Dianne and Judy. Bridget thought this was all very cool. 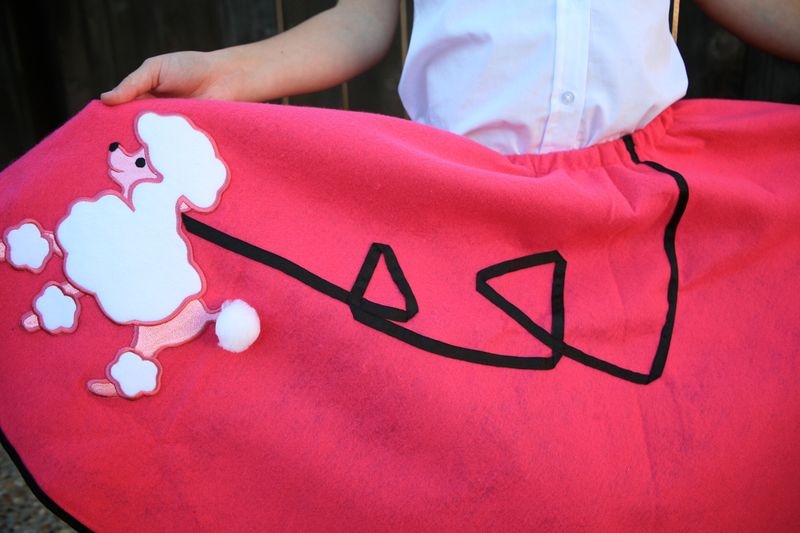 She picked out the poodle appliqué at Hobby Lobby; I think the solid black ones are cooler, but I am a.) not 6.5 and b.) not the one who would be wearing it. The tutorial I followed said to iron the appliqué on according to package directions, but Bridget immediately ripped into it after we bought it (about five days before I made the skirt) so the package directions were missing when I needed them. I just looked it up generally online. If you use felt for something like this, though, be careful to use a thin cotton cloth in between or else the felt will melt a little.

The tutorial I followed also said to "sew on the ribbon or sequin rope" which wasn't as much direction as I would have liked. However, I came up with a good way to do it: I pinned the ribbon down, taking care to turn it over and pin down to create the loops. Then I sewed over it on either edge; this not only kept it from flapping up on either side, but it made the loops flat. I added a little pre-made black binding strip to the bottom of the skirt too; I don't know how historically accurate that is, but it's one of the few skills I possess when it comes to sewing so I decided to add it. I did not pin the binding strip, because I am impatient—I just sewed a little at a time. It was way faster to do it that way. Even when you factor in the second trip to Shreveport to buy another package of binding tape to finish the last six inches. 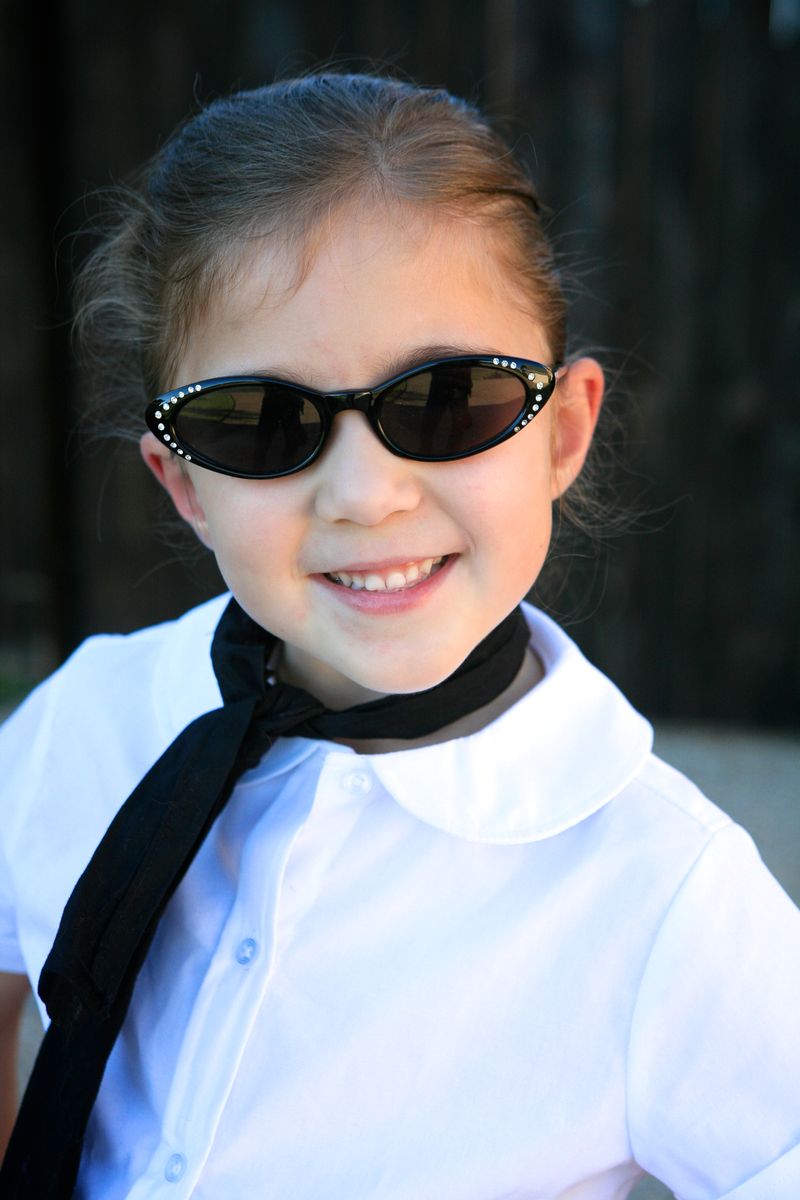 I also made a little black scarf of my own creation (read: I couldn't find something premade that would work). The tutorial I followed mentioned using tulle, but I wanted it to look a little more substantial; I ended up hacking up a solid black bandana from Hobby Lobby into one longer strip, then finishing the sides by hemming (or what I imagine hemming to be, as I don't really know how to hem). The first one I made looked a little too bolo-tie for my taste, so I hacked up some more of the bandana and made a slightly wider one. It looks great from a slight distance, and very scary up close. Bridget couldn't have cared less!

We ran a dress rehearsal on Thursday night so Matt could see how it all went together since I would be long gone on an over-the-road bus full of middle schoolers headed for Houston by the time Bee woke up on Friday, and he would be responsible for making sure all pieces were in place. She forgot to wear the sunglasses (picked up years ago in Colorado Springs at this event, ha!) but I'm not sure that would have been all that great an idea during the actual school day anyway. They were good for some post-50s Day photos, at least! 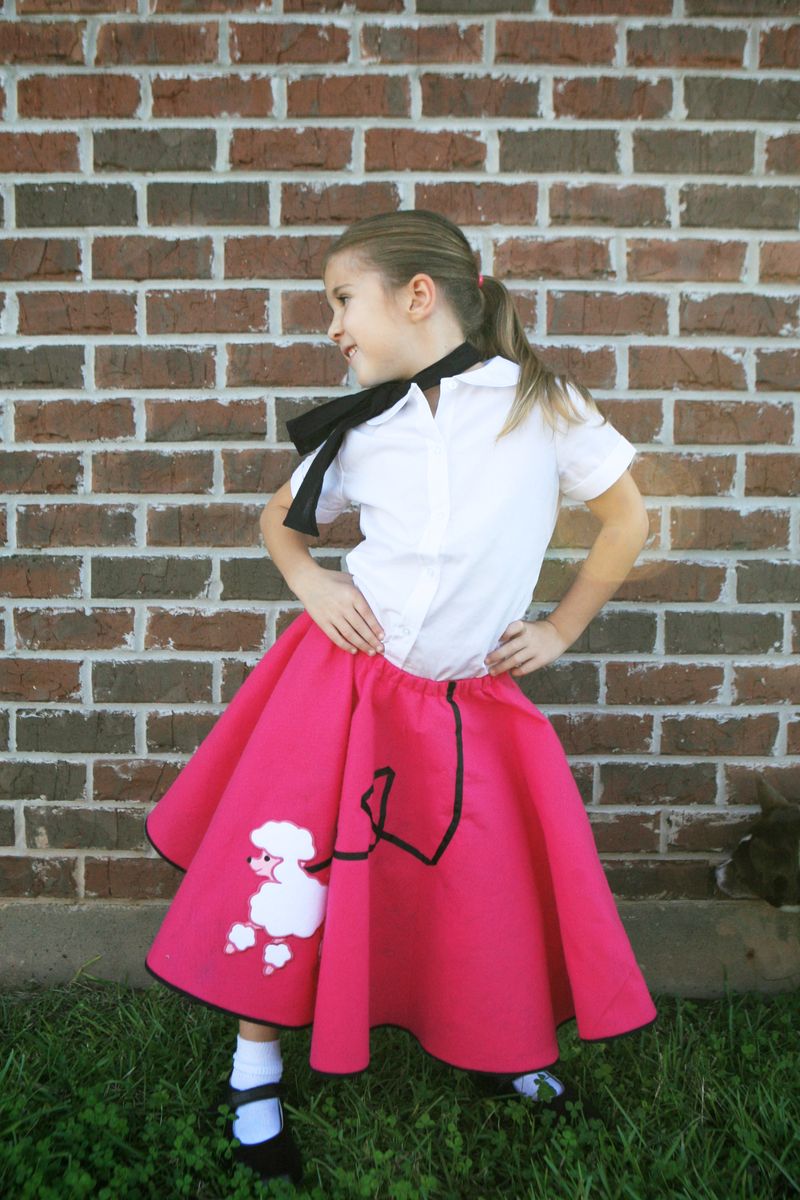 Speaking of which, this one is a ham. She had great fun getting her picture taken. 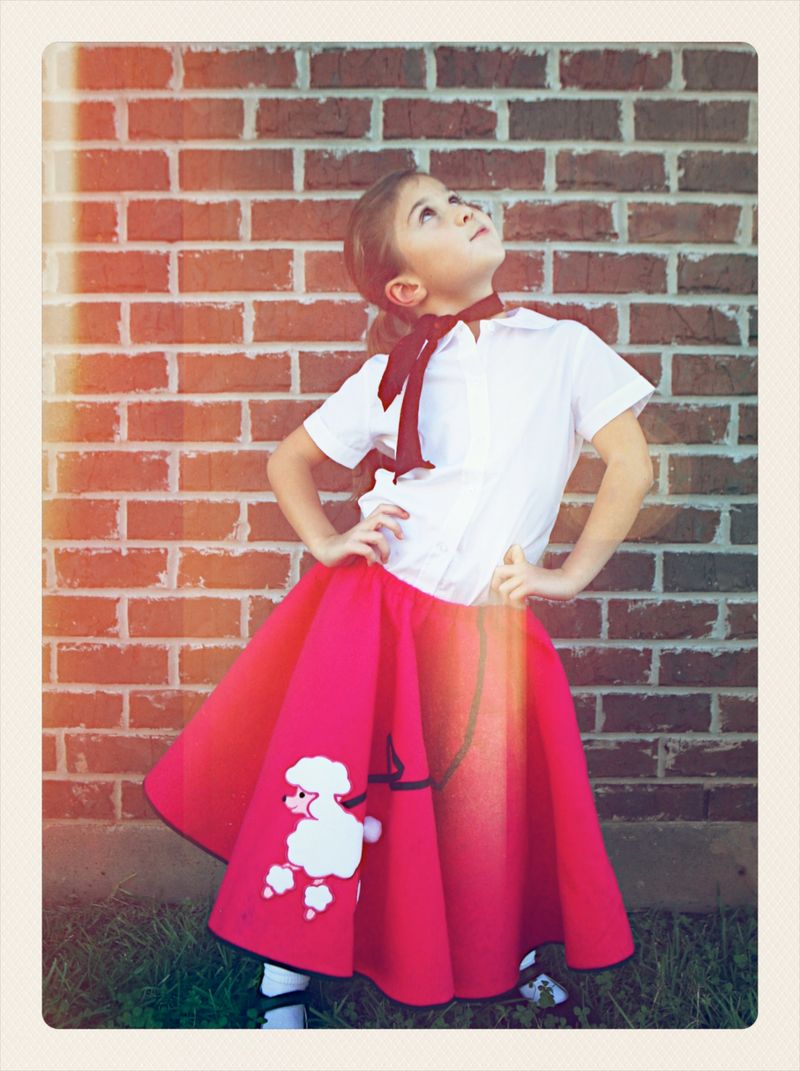 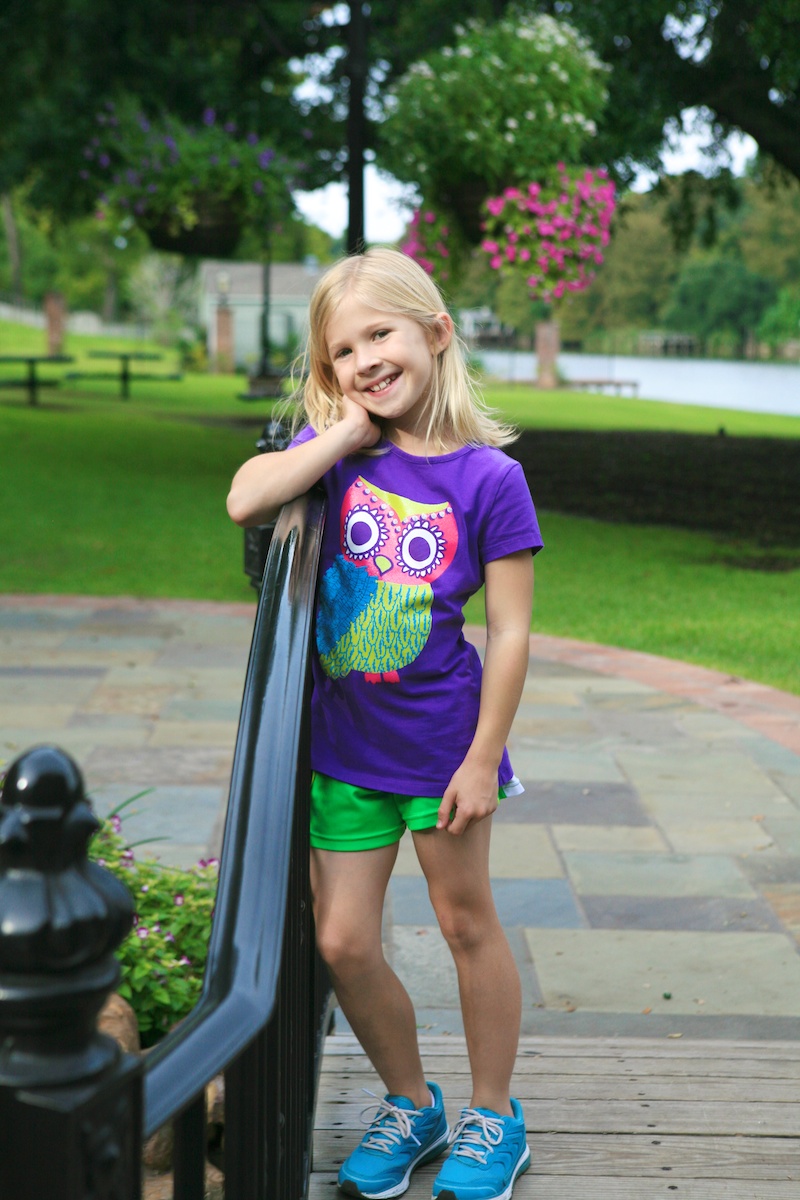 Sometimes the world just coordinates with her perfectly.

1. I cannot seem to time a Ten on Tuesday with an actual Tuesday to save my life these days.

2. I am working on about 80 million disparate projects all at once: photo editing, LA business research so I can revive my photography business, trying to figure out how to make Bridget a poodle skirt for her 50s Day on October 18, overseeing Maddie's Egyptian necklace made out of pasta (it's a long story—but I swear she is going to learn something while she makes it even if her teacher isn't making her), finishing up a few unfinished layouts for my class, getting ready to take a short class myself on Skillshare, making another registration video for BPC and listening to 8000 stock Christmas songs until I get the perfect one, trying to stay three steps ahead on the piano lesson teaching, making some projects for Cosmo Cricket, etc. etc. etc. My poor little notebook looks like a crazy person owns it. Oh wait.

3. Are glockenspiels too hipster? I don't know. My top two favorite stock Christmas songs in the running for the video have glockenspiels in them. I googled this question and came up with a funny picture I cannot share here. I might just forge ahead anyway, since it is cut with other instruments.

4. Who googles that, anyway? Someone with a crazy notebook, is who.

5. It's the sixth annual Scott Kelby Photo Walk this weekend! You should sign up. It'll be fun.

7. I finally got this done last week: Nana and Papa will be here next week—there is nothing like company-on-the-way to light a fire on the rest of the undone stuff around here! I am thinking of adding this to my sorely neglected 52 Projects list, even though we did it once before. But this time I did it by myself! Only three stray nail holes thankyouverymuch.

Posted by Elizabeth in Ten on Tuesday | Permalink | Comments (3)