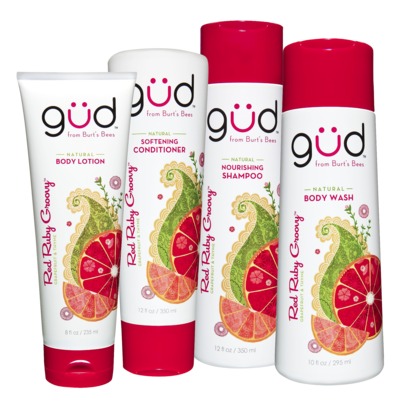 I've been off pricey [yes, that's a relative term] shower supplies from Bath & Body Works since about 2004, when a.) things started getting more expensive around here and b.) I had that unfortunate incident with a previously acceptable fragance that pregnancy caused me to nearly claw my eyes and skin off after using. These days I spring for whatever Jill picks up for me at Planet Earth when she's in Montana, and happily stick with Dove and St. Ives the rest of the time. But as I was zipping through the Shreveport Kroger's a few weeks ago, my eye caught this new line from Burt's Bees, so I picked up some of the body wash. I am a sucker for citrus—especially grapefruit—and this might be my new favorite. I'm afraid to let Maddie try it because she had an unfortunate incident of her own with some baby Burt's Bees when she was ten months old, and it scarred us for life. 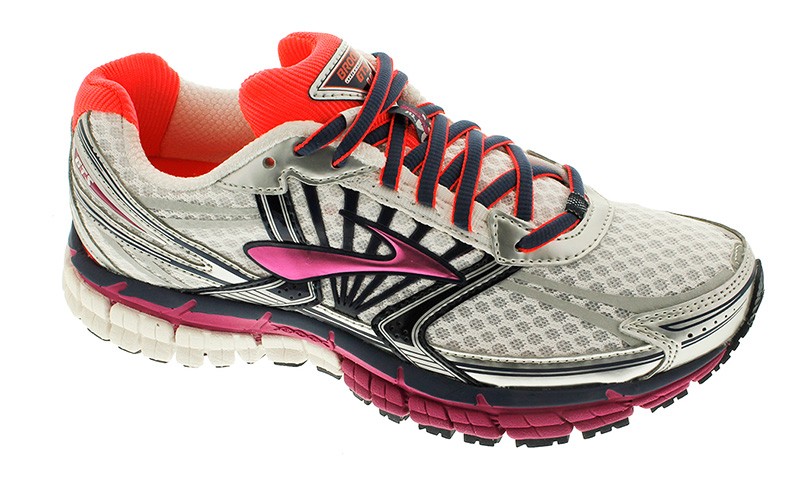 I wore out my second pair of Brooks in under 8 months (a record!) and immediately bought my third pair. Both Matt and I are Brooks converts for life. These are fantastically obnoxious in color scheme, and made a fantastically awesome difference this week—wow, were my other ones worn out. We highly recommend this brand. Gracie is fast becoming a duct tape purse/wallet master; she recently got some Platypus brand duct tape and was super-impressed with how thick it is. She prefers Scotch brand duct tape over actual Duck brand duct tape, but she's pretty happy to make stuff with whatever anyone will supply her with.

I have a 17-23 minute window (sorry to be oddly specific) between the time Maddie leaves, wrapping up lunch-packing, and waking up the other two each morning to have breakfast/coffee and quickly catch up on blogs/Facebook links. I only click through about 3% of the links people post on a regular day (this is not oddly specific, but totally estimated poorly) and lately I find myself reading more and more things that originate from Amy Poehler's Smart Girls site and Facebook page.

I am looking forward to the end of the school year when I can finally watch Jimmy Fallon more regularly (because the alarm clock isn't ringing at 5:50 am). Until then, I just keep catching a clip here and there. This one is worth all the seven minutes, 26 seconds you'll spend watching it. Emma Stone is a star for a reason, as is Jimmy Fallon. : )

Posted by Elizabeth in Lists With Friends 2014 | Permalink | Comments (6)

So much has been said about your life and death in the last few months, but I just wanted to add to the official record that we miss you. Watching your masterful, masterful performance in Capote this weekend only made this sentiment more pronounced. 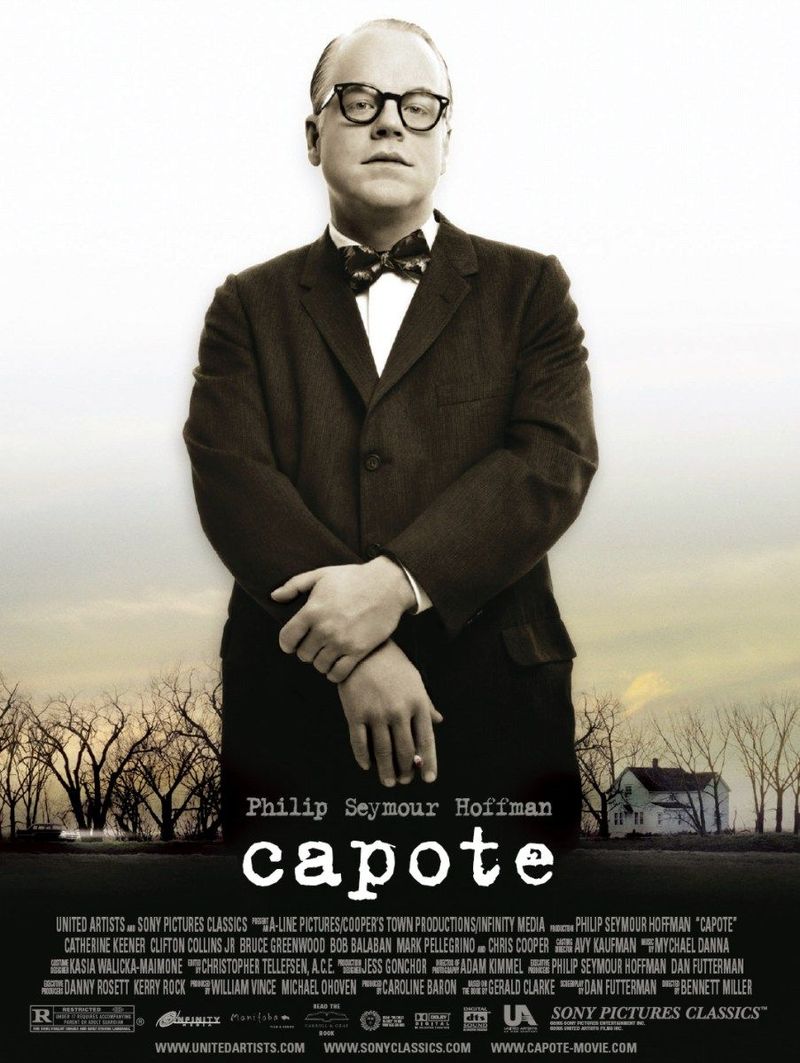 Dear Whoever is in Charge of the Latest TV Ad Campaign from Dick's Sporting Goods,

Nice work. I hope you're moderately famous in the advertising world, because those ads are good and you deserve some recognition.

(Here's one--there are a bunch more)

Everyone knows it's not a button, it's a key. Well, everyone that ever had me as a teacher, at least.

We are most excited for your visit to Shreveport Municipal Auditorium in June. I hope you are excited too, and PLEASE DON'T CANCEL YOUR CONCERT. Thank you. 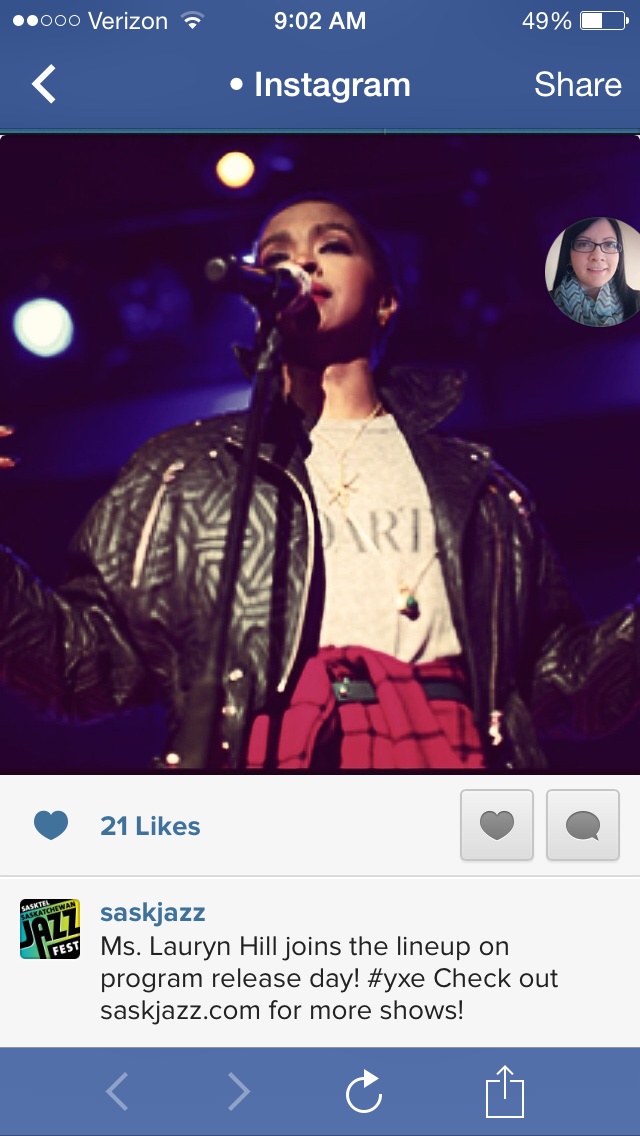 My informants are wide-reaching and effective. My friend Nadine tells me you are performing in Canada this summer, in addition to a bunch of other places. Perhaps this means a new album is really in the works, instead of just purported to be in the works. Please?

There are definitely some very worthwhile benefits to being an Air Force kid: a vastly expanded worldview at an early age, the opportunity to eat a variety of interesting foods from a variety of interesting places well before college, and meeting/making friends in places you absolutely never would have been otherwise. I am the only person in this family who can't claim "Air Force kid" on her resumé; Matt moved something like 13 times before he settled into four years of high school, all in the same place. Bridget will attend her first four years of elementary school in four different elementary schools.

There are definitely some very worthwhile benefits to not being an Air Force kid, too. Knowing where in the world to look for many of my childhood friends is a big one. There is something to be said for still being in touch with the only person who attended every single school that you did—all the way from kindergarten to college. There is even more to be said for friendships that span more than 40 years. I played along with #TBT today, which got me thinking about some of my earliest friends: 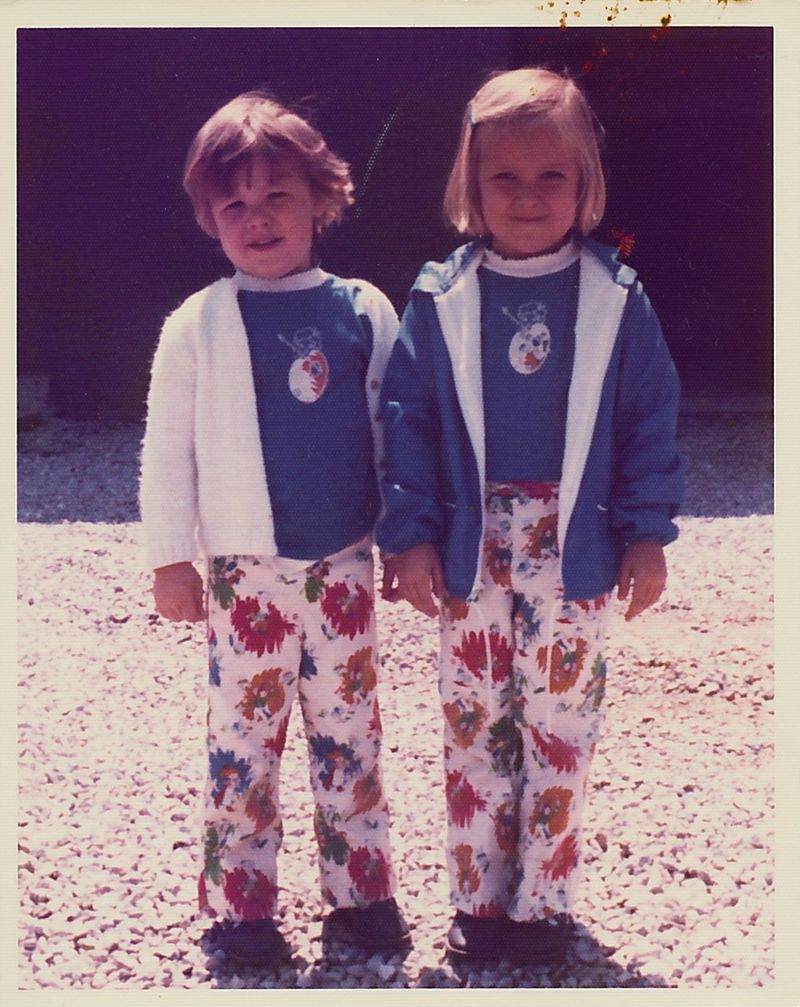 I remember so clearly when this picture was taken; where we were standing in the driveway behind the house, and how mad we were that our moms made us put on our jackets before the picture, which ruined the perfect twinsie thing we had going on. Oh, 1970s Carter's clothes! You were the best.

Nancy and I have been friends since I was eight months old, which is the age I was when she was born. Because our mamas were friends, we were automatically friends, too—this doesn't always work out in the long run, but in our case, well, we're carting our families to Disney World together this summer, so there you go. Her house was the one I liked best of my friends' homes growing up; there was always something interesting going on there, to include a lack of central heating (by choice!) well into middle school (I think), a grandma with her own apartment connected to the house, lots and lots of old family photos on the walls, and pianos and guitars and singing, always. 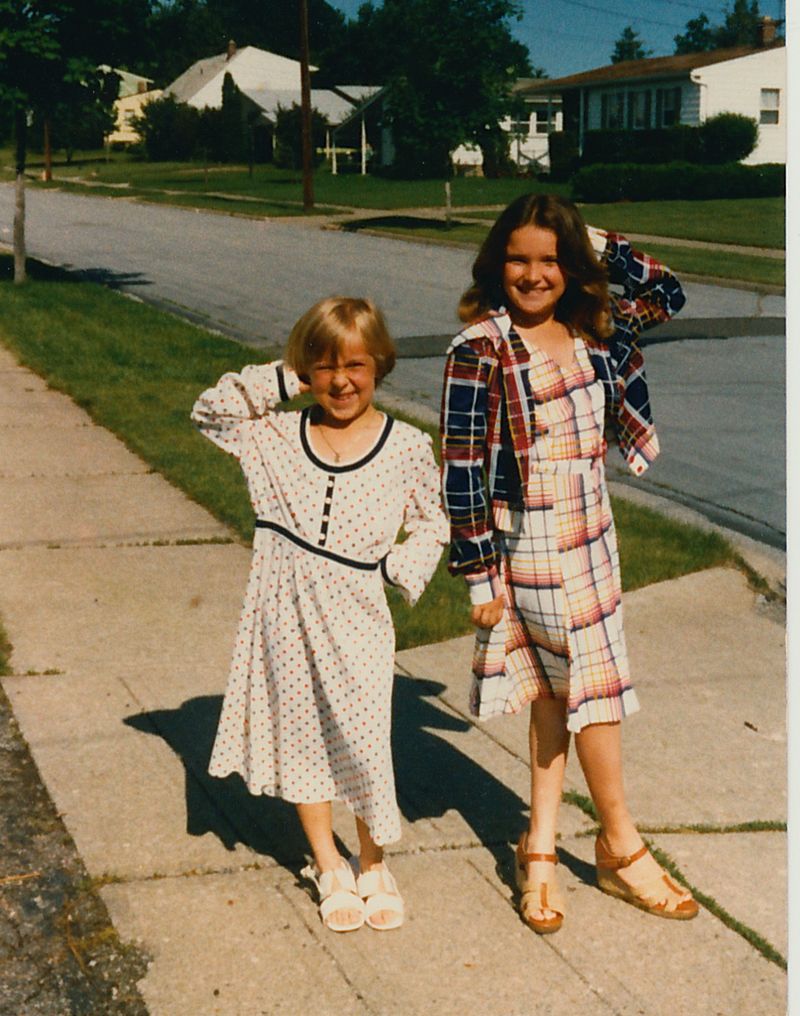 I have no recollection of this particular day, though I do remember playing on the sidewalks in front of our houses all the time.

Kenna was my older next-door-neighbor who always had a plan, and I was the younger next-door-neighbor who always wanted to go along with it. We spent a lot of time working on our baton twirling skills, and I lived in fear for years of the dead people she told me were behind the wood paneling in our partially finished basement. [Note: she does not remember telling me this, though she admits that it sounds like something she might have done.] My first record (Shaun Cassidy) was a party favor from one of her birthday parties. I once broke into her house at her mom's request after she locked herself out. She moved away somewhere when I was in elementary school, though someone must have been keeping us in touch because Matt and I went to her wedding while we were in college (a beautiful, snowy December wedding in Ohio!).

I don't have a photo of our early childhood friendship days, sadly... but we were friends from around the age of 2 or 3; she lived down and across the street a few houses from where I'm standing with Kenna. She cut my hair once for me when we were 3 (ha) and I don't remember much else about playing together, though I do remember visiting her house when they moved to a different neighborhood because we spent the entire time trying to learn how to blow bubbles with our gum under the instruction of her older brother, Joel. She moved away-away for a few years and we shyly met back up in 7th grade when her family moved back, and were pretty inseparable through middle and high school. She was the matron-of-honor in our wedding.

This is one of my favorite childhood photos, and not just because our 1970s sundresses are actually cute!

Shannon lived a few streets behind mine in our neighborhood, and we must have met on the first day of kindergarten. We walked to school together most days, and I remember being allowed to walk to her house and back, which I can still do very clearly in my mind. Her backyard was part of a terrible drainage catastrophe that stretched through many backyards and worked in our favor each winter when it iced over and turned into a first-class ice rink; it was also the only backyard I had ever seen with a full basketball court, built for her brothers. She is the one who called me on the phone to ask if I would sign up to play softball on the same team the summer after second grade (my primary sport through high school). I attended the tragic funeral for one of her older brothers when I was in 9th grade, and attended a number of college basketball games that her younger brother played in at Miami.

Everything in life is a trade-off: because of this, not that. It comes down to one thing: all you can do is celebrate your own experience and not dwell too much on the "thats" that you missed, because they aren't yours. I am wildly thankful that my early limited worldview and narrow Ohio palate afforded me the opportunity to develop friendships at an early age that exist on a continuum, just as I am wildly thankful for the opportunities the girls have had to live near mountains, rodeo, national monuments, and really good donuts. They've made some dear friends along the way, and it would be crazy to imagine a life that fails to include any of them.

I'm excited to share some big news today: my friend Adam Smith launched his first Kickstarter campaign today! I'm a backer, and you can be too. Here's how it works:

Pretty nifty, especially if you're a grocery store flower shopper like me; I read an article in Real Simple years ago about doctoring up grocery store flowers that was kind of mind-blowing for me at the time (mostly because it had never occurred to me that one might doctor up flowers to make them look better) and I am excited to make "look better" turn into "really pretty and fancy" with the same raw materials. Here is a beautiful example: 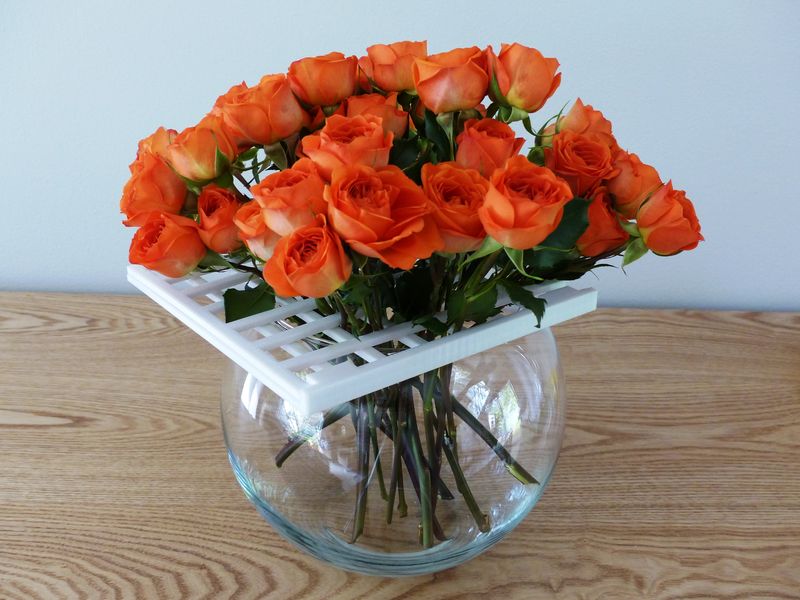 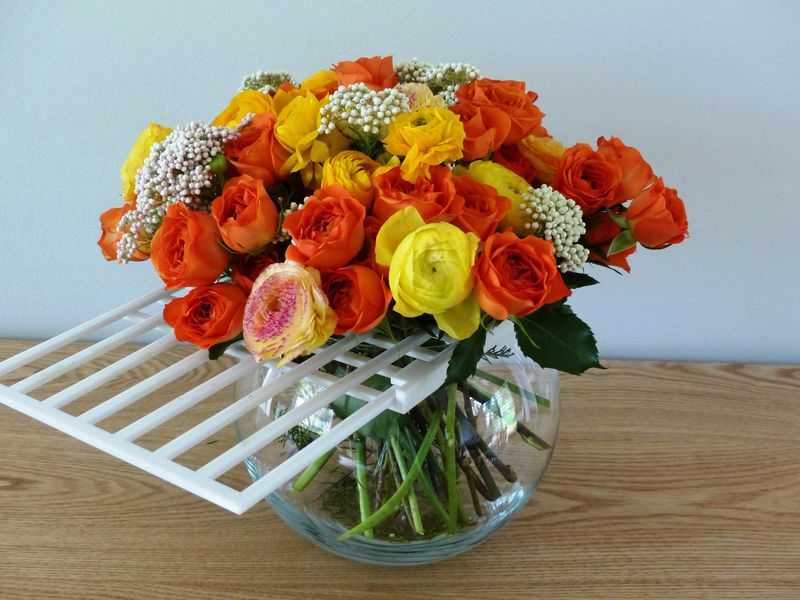 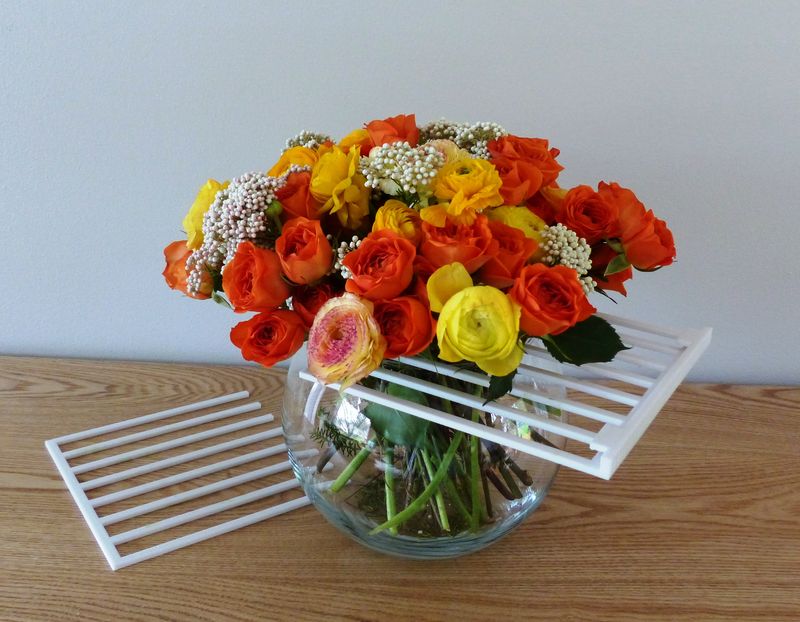 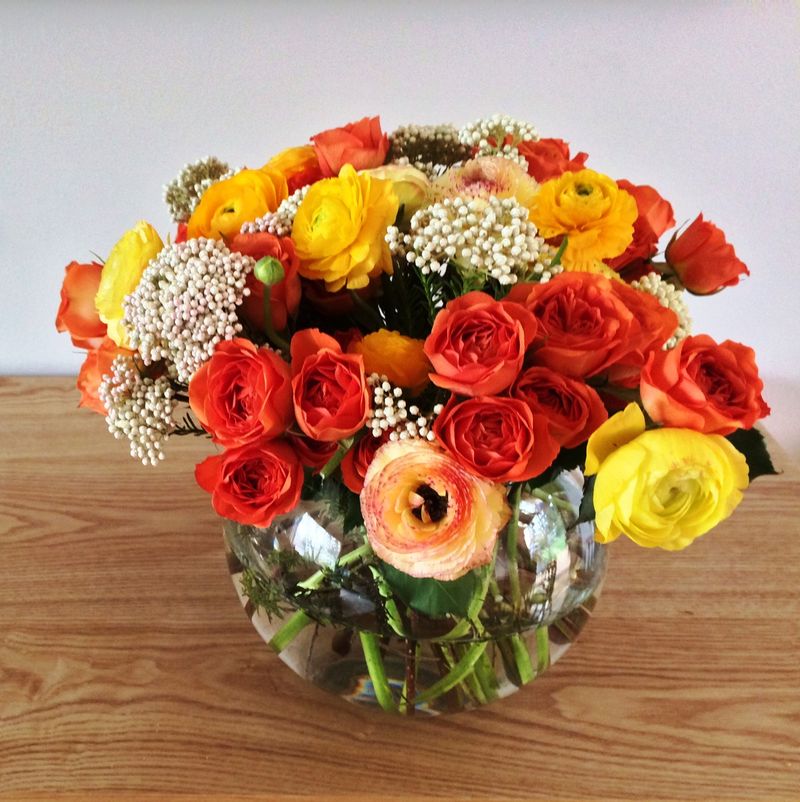 That kind of looks like a florist did it, doesn't it? I love florists, I do! But I love doing things myself even more. : ) Oprah once told me I should always have fresh flowers in my house no matter how poor I might be, and years later I have to say—she was right, and I do the best I can to heed her advice. Even if the flowers are clover bouquets made by small children, they really do brighten up the place!

So here's what you should do: tell everyone you know about the cool DIY Floral Grid. Buy one for yourself. Make something beautiful for your kitchen, or for your friend's birthday, or for a summer porch party. Take a picture and send it to me so I can share with Adam! You'll be supporting innovation, a product that will be manufactured in the Pacific Northwest, and best of all—you'll be making an investment in the future of a really clever inventor. He has more ideas up his sleeve, to be sure.

p.s. Are you new to Kickstarter? This is the second compaign I've supported (the first was for a Mama Cassie's cookbook) and it is really very easy—everything is handled through Amazon for payments. Don't be afraid! : )

It's Hard Being a Non-Louisianan in Louisiana

I have many, many stories to share but for now: just this, courtesy of Bridget. Read carefully. Hee hee hee. 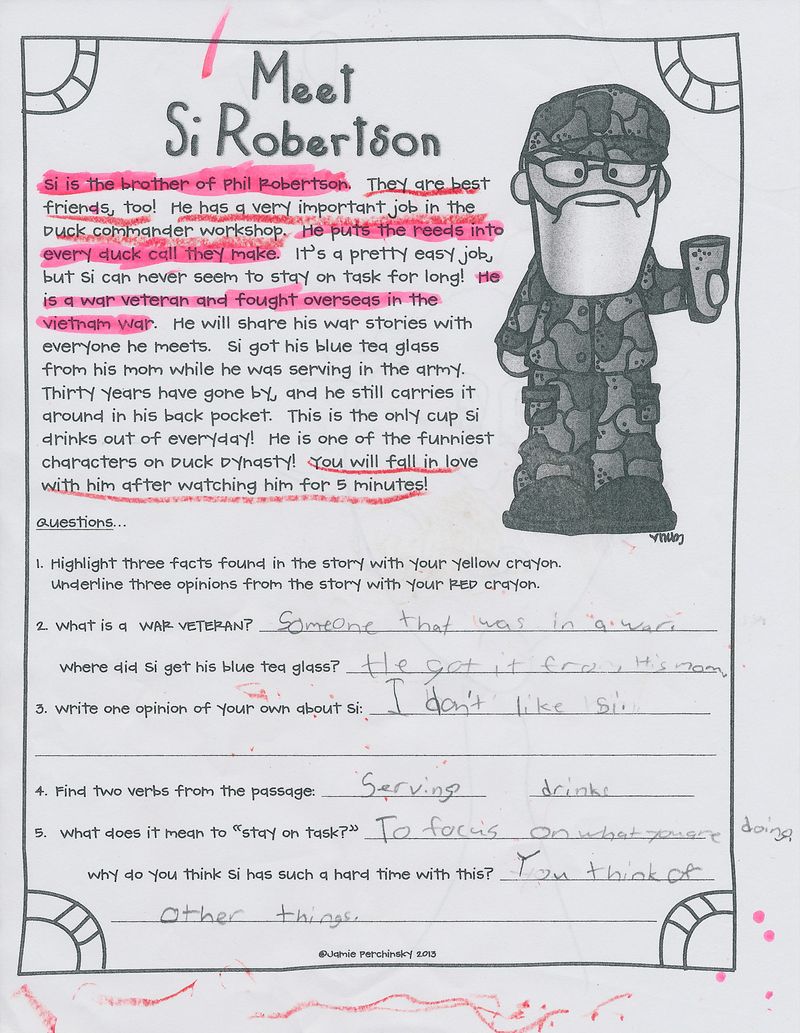