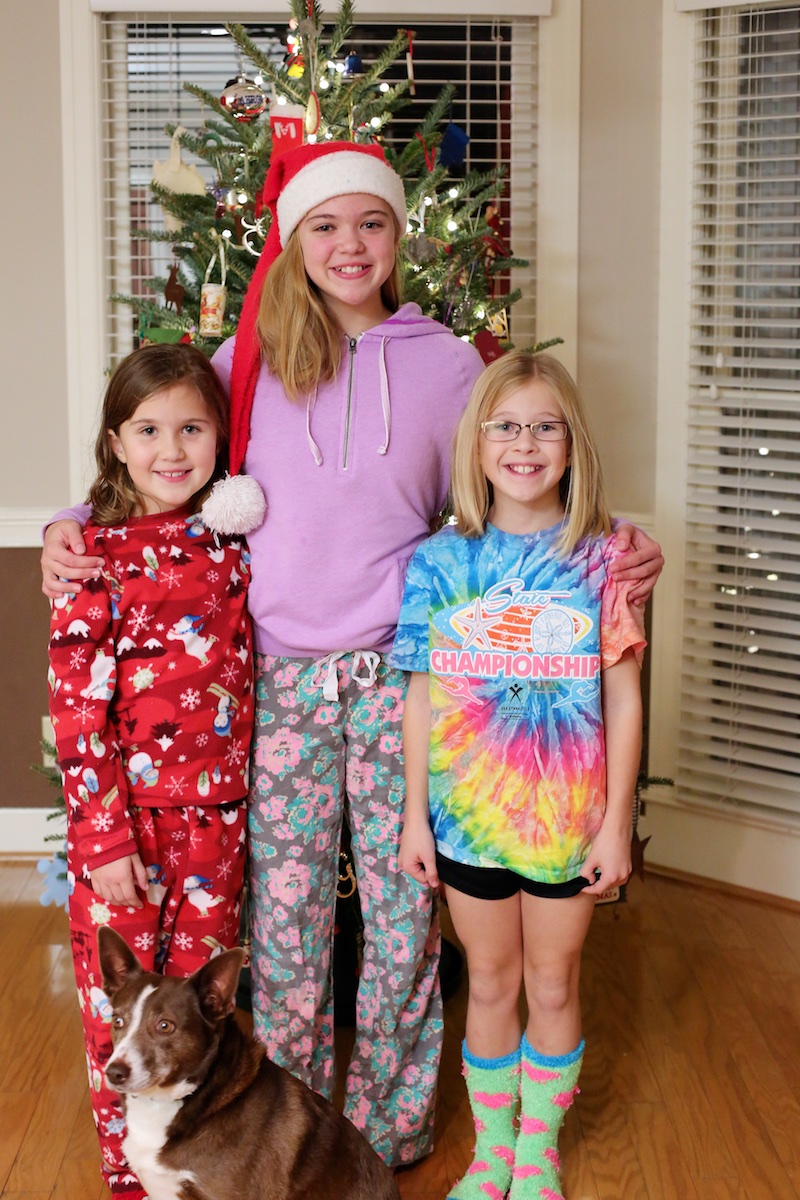 Hobbling toward the finish line this week in the worst way—between Matt's finals (so much writing! So many deadlines!) and the girls' miscellaneous last projects and long days, we are pretty much D O N E.

Celebrating our wonderful new ten-year-old, which will require a special post all its own.

Cursing my "new" running shoes which seem to have worn out overnight... And then realizing it is almost exactly eight months to the day on which I purchased them, which is exactly the point I had to replace my last pair of Brooks. And then feeling a little sheepish and apologetic toward my trusty running shoes. (And hey! Just over 300 miles in eight months!)

Racing to the mailbox every day, because, CHRISTMAS MAIL. I love to send it, I love to receive it, and I don't get mad at you if you don't get to it this year. Or last year or next year. But it anchors me to all the places and people I love and so that's that.

Thinking about the implications that additional and overwhelming examination can offer with the conclusion of Serial this week.

Commiting to my 2015 project! It might be a little ambitious, and it is definitely play-along. Check back January 5 for more info.

Wiping tears over the big song finale to The Colbert Report last night. It was touching in the sweetest, most lovely way. Henry Kissinger? Kareem Abdul-Jabbar? Big Bird? Doris Kearns Goodwin? It was perfect.

Scrambling and spinning to get a thousand things done. As usual.

Enjoying so much the tradition of making chocolate-covered cherries with Matt. We started late and only made one batch last night to cover what we needed today for our little gifties, which included a box for Gracie's and Bridget's morning bus driver per their request; they say he is impossibly grouchy and wanted to do something nice for him. Isn't that what all the scrambling and spinning is all about at the end of the day (er, past midnight on the next day?)

Posted by Elizabeth in Lists With Friends 2014 | Permalink | Comments (4)

Thanks to everyone who took the time to share some of their favorite reads of 2014 (or books they're looking forward to!). What a great list—definitely take a look in the comments for some great book ideas!

My trusty assistant Random.org has chosen a winner!

Hooray, Melissa! The book will be available in the U.S. Amazon store in mid-2015 if anyone else would like to purchase a copy (and of course, available now directly through Unbound as an eBook or gorgeous hardbound copy).

Special thanks to Unbound for sponsoring this giveaway! 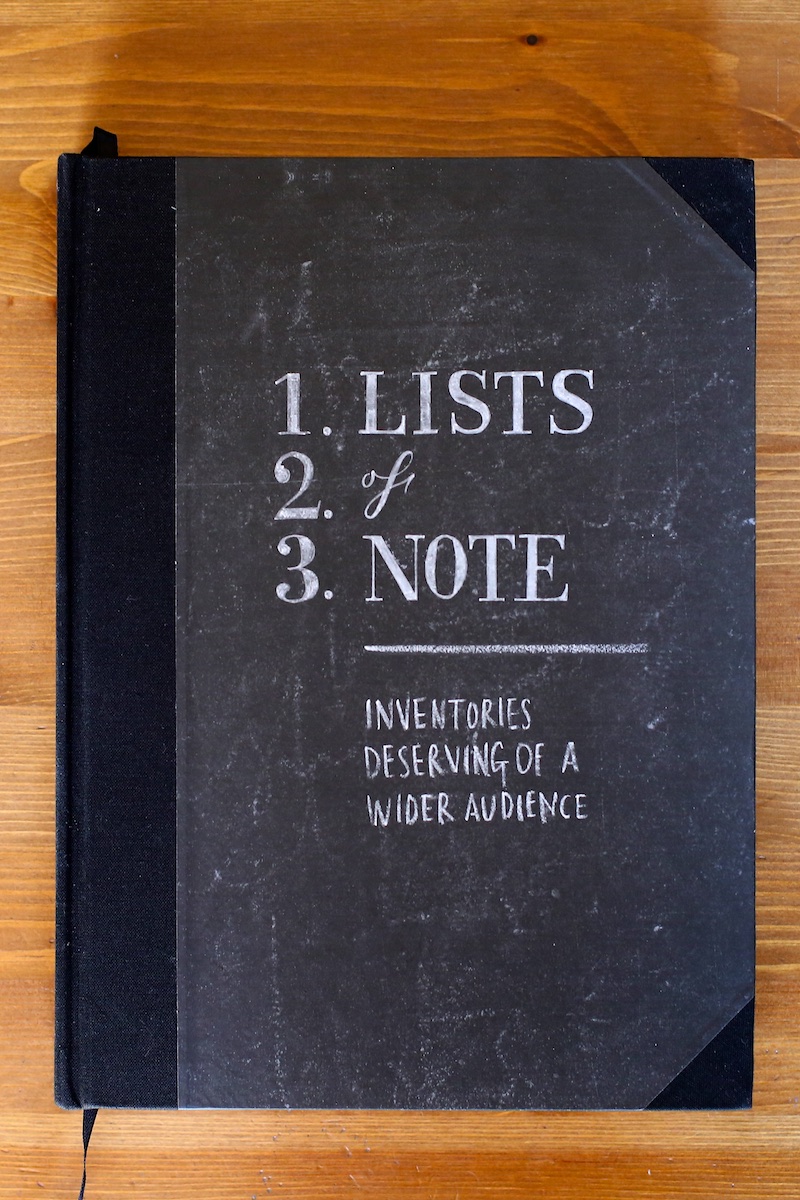 One copy of Shaun Usher's absolutely beautiful Lists of Note, which isn't really available in the U.S. until June 2015. This first edition copy comes direct from the very unique (and generous) U.K.-based publisher (more on that in a minute).

I don't remember when I discovered Shaun Usher's blog Lists of Note or its companion blog Letters of Note, but I've been a subscriber for a couple of years, at least. He shares lists and letters (of course!) written by famous authors, artists, photographers, politicians, activists, musicians, and many more. I bought my dad a copy of Letters of Note for Father's Day this year and he has enjoyed it tremendously.

Here's a peek inside this 318 page book (click to enlarge images): 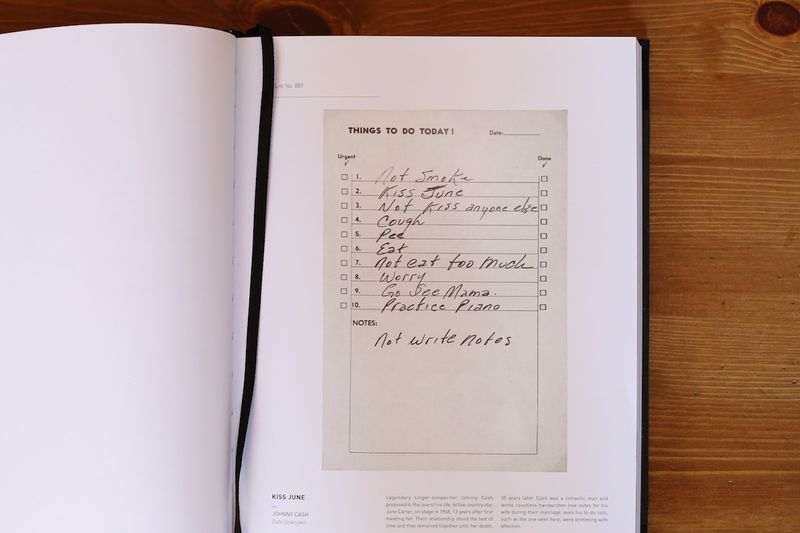 It opens with one of my favorite lists, written by Johnny Cash. 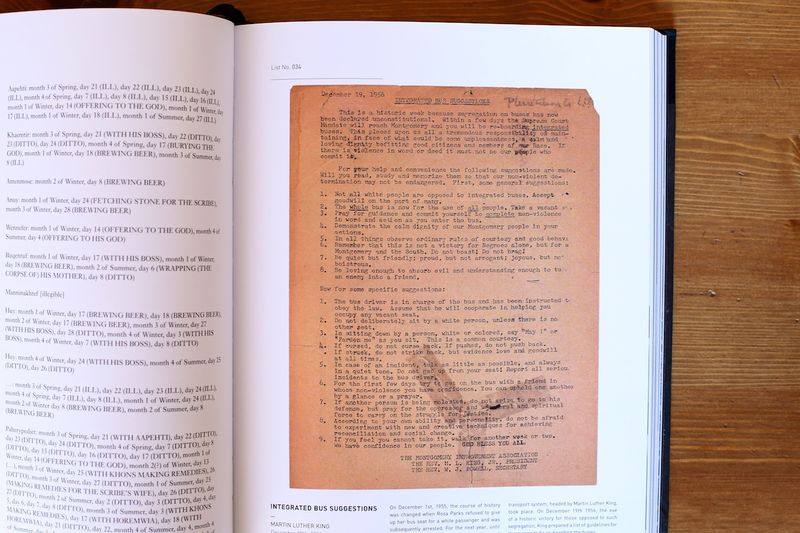 Integrated Bus Suggestions, by Dr. Martin Luther King, Jr. is included, which takes on all kinds of meaning this year for me of living in Montgomery. 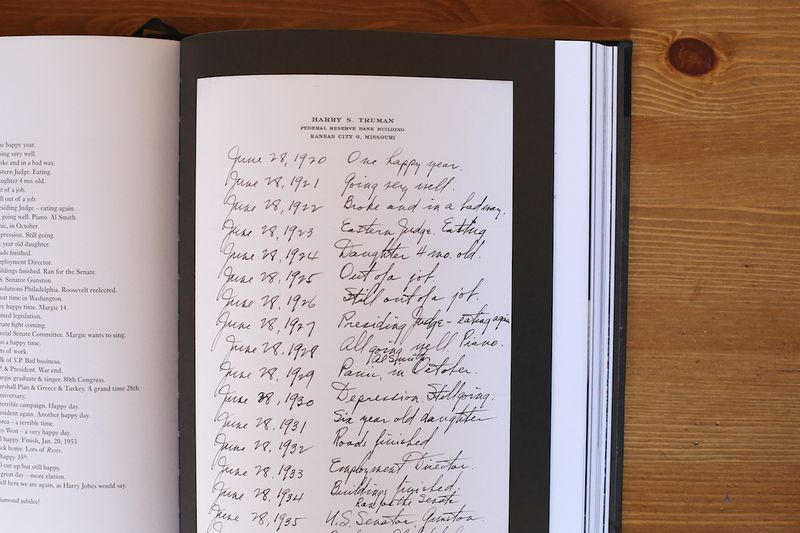 This is a fun one, by President Harry S Truman written to his wife on the occasion of their anniversary. 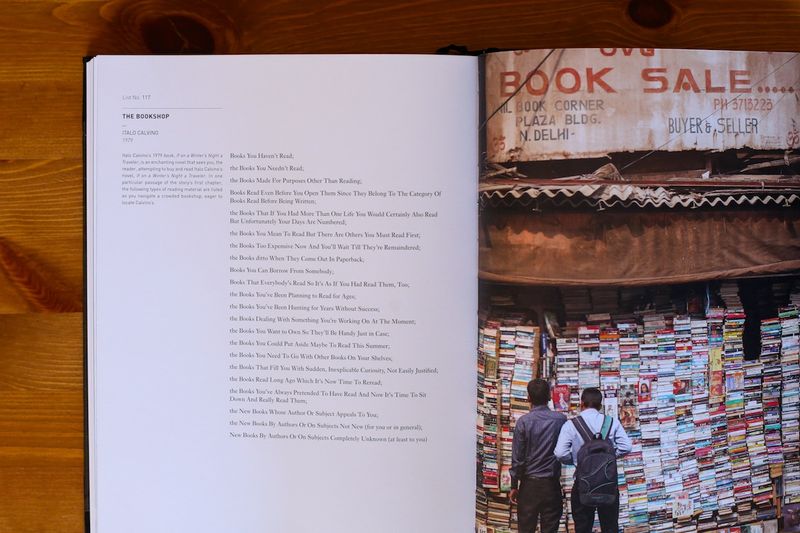 YES. I don't know this author or the novel it comes from (If On a Winter's Night a Traveler by Italo Calvlino, 1979), but I'm going to have to read it now because just look at this, booklovers!

There are 125 lists in total; they come with a little explanation next to the original image, and all are translated (which makes sense for many that are not in English or are nearly illegible). It's a book to be devoured, savored, and revisited. It elevates the practice of list-making into an art form. It's truly a gorgeous book. And I have a copy to share! To enter, just leave me a comment about either a favorite book you read this year or a book you're excited to read. I will selfishly compile them into my own reading lists for 2015 : ) Winner will be announced in a few days. Enter now, because comments will remain open until...I close them!

This giveaway is sponsored by Unbound! You should check them out.

Unbound is revolutionary new way to get books published, founded by three authors, John Mitchinson, Justin Pollard and Dan Kieran. Using the www.unbound.co.uk publishing platform, authors pitch their book ideas directly to their readers. Readers choose the ideas that they like on the website and pledge their support. When an idea has enough supporters, the book is written and produced. All supporters get their name printed in every edition of the book and all pledge levels include the e-book and immediate access to the author's shed.

To date Unbound has published books from several well-known authors including Kate Mosse, Julie Burchill, Jonathan Meades, Chris Yates, Robert Llewellyn and ex-Python Terry Jones, as well as a first novel from comedian Katy Brand and the bestselling Letters of Note by Shaun Usher. The Wake by Paul Kingsnorth, published by Unbound, became the first crowdfunded novel to be long listed for the Man Booker prize this year.

About Unbound's beginnings from TechCrunch

Lists of Note review from The Guardian

Lists of Note review from The Independent

Lists of Note review from The Telegraph

a great interview on NPR about Letters of Note 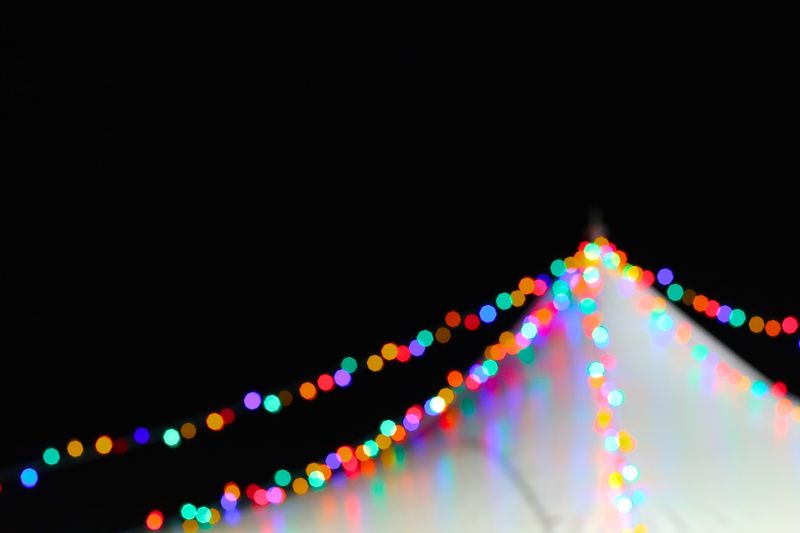 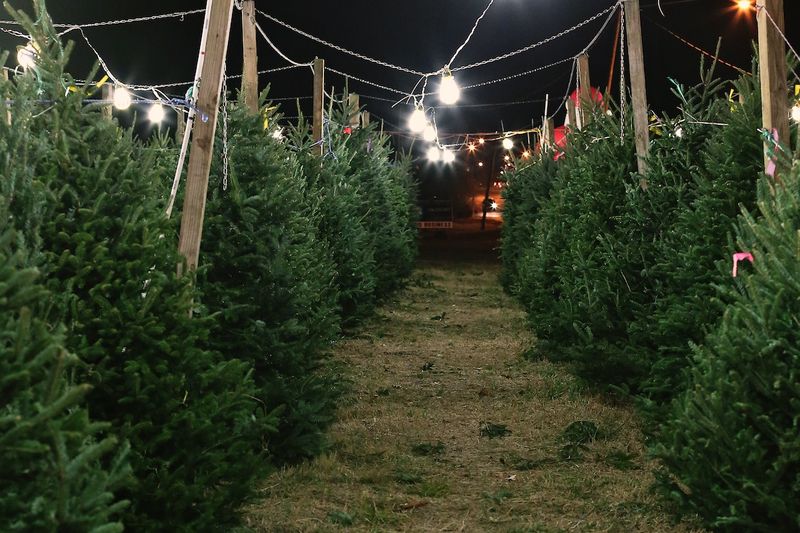 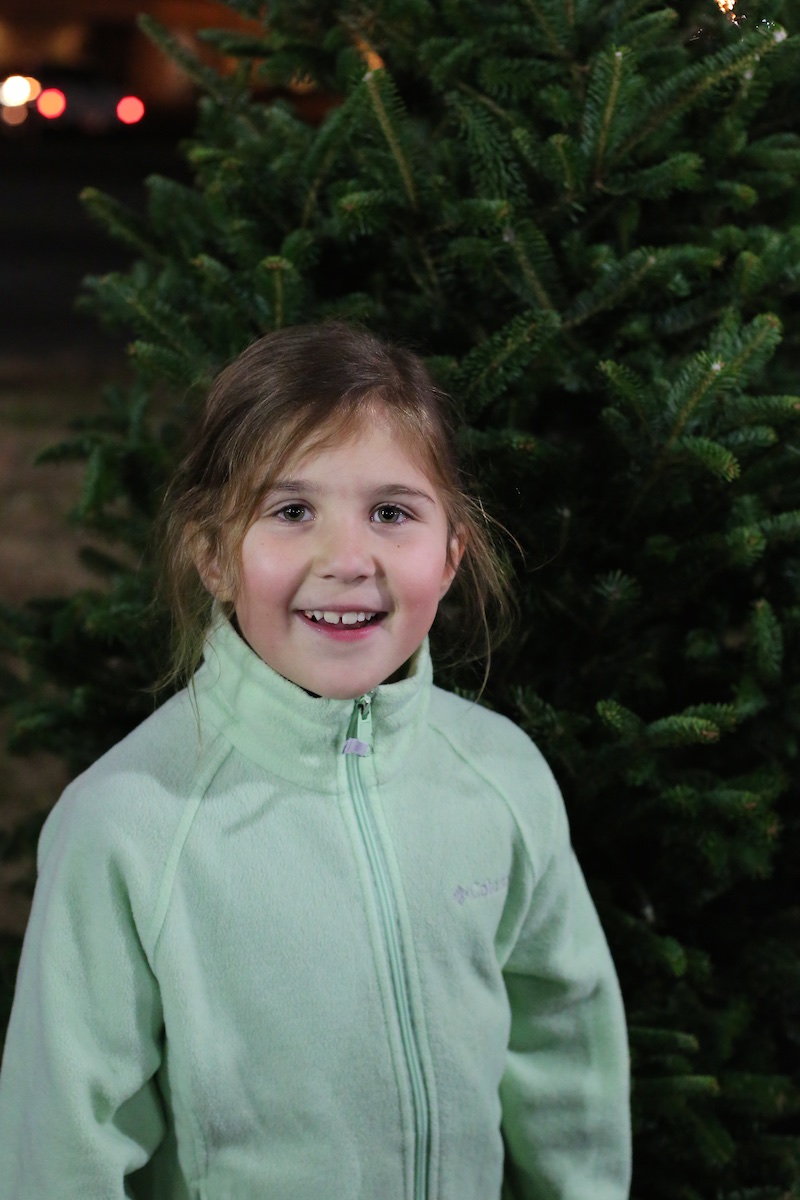 We had a small light-tastrophe so Part II actually hasn't happened yet ; ) But our sweet little Alabama-grown tree smells very, very good.

Way back when we lived in Montana, I had the honor and privilege of coaching the Great Falls High School Speech and Debate team when I taught at GFHS. I loved coaching that team—one year as an assistant, and four years as the head coach (oh, to live somewhere for five years!!). The last two years—and possibly three, I can't remember exactly—I started up a little tradition before the state meet to put together "state bags" with Abby and a few others, which were little treat bags to get the final 42 competitors ready and excited to compete.

I can't for the life of me remember what we put in them.

I do, however, know exactly why I did it:

I don't know if my old speech and debate kids remember all the contents of those bags either, but I do know that many of them remember the fun of getting them some nearly 15-16 (!!) years later.

When I coached the scrappy little spelling bee team at Afflerbach in Wyoming  in 2012-2013, I orchestrated a little variation on the state bag and made spelling bee cookies and special bee pencils (by hot gluing the little rubber bees to pencils) before the schoolwide spelling bee: 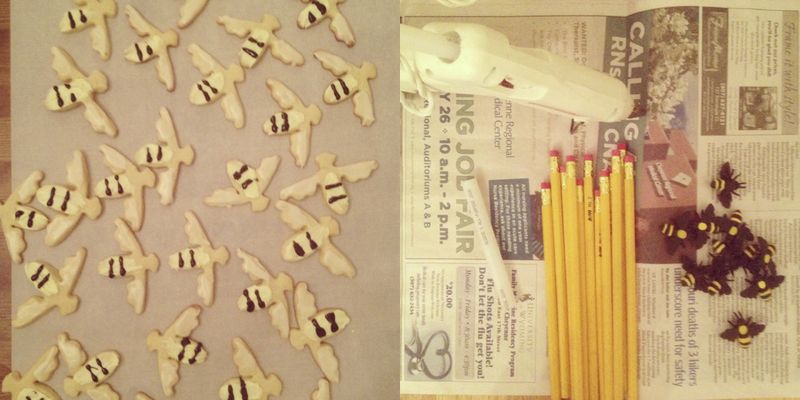 Oh, iPhone 4s, you didn't take such great pictures, did you?

Seriously easy (as evidenced by the super fast icing job). But the impact of making those kids feel special was priceless—a little effort goes a very long way. I had a bee cookie cutter and a hot glue gun anyway, why not put them to use more often? 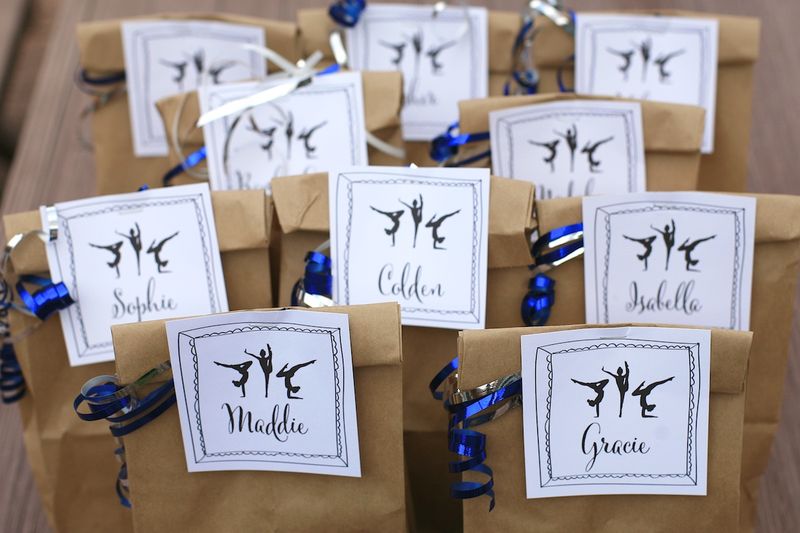 The 2014 Alabama Compulsory Gymnastics State Championships are this weekend in Mobile, so I decided on a whim today that I would make state bags! It didn't occur to me to make them last March when Louisiana held its Compulsory State Championships, but I'm so glad I decided to do it today. The key: keep it very simple. These are nothing more than brown paper lunch bags with a little dollar spot ribbon stapled on with a pretty label I made using a frame from Paislee Press and some gymnast silhouette clipart.

That's it. But it's good to make a little extra hoopla sometimes. 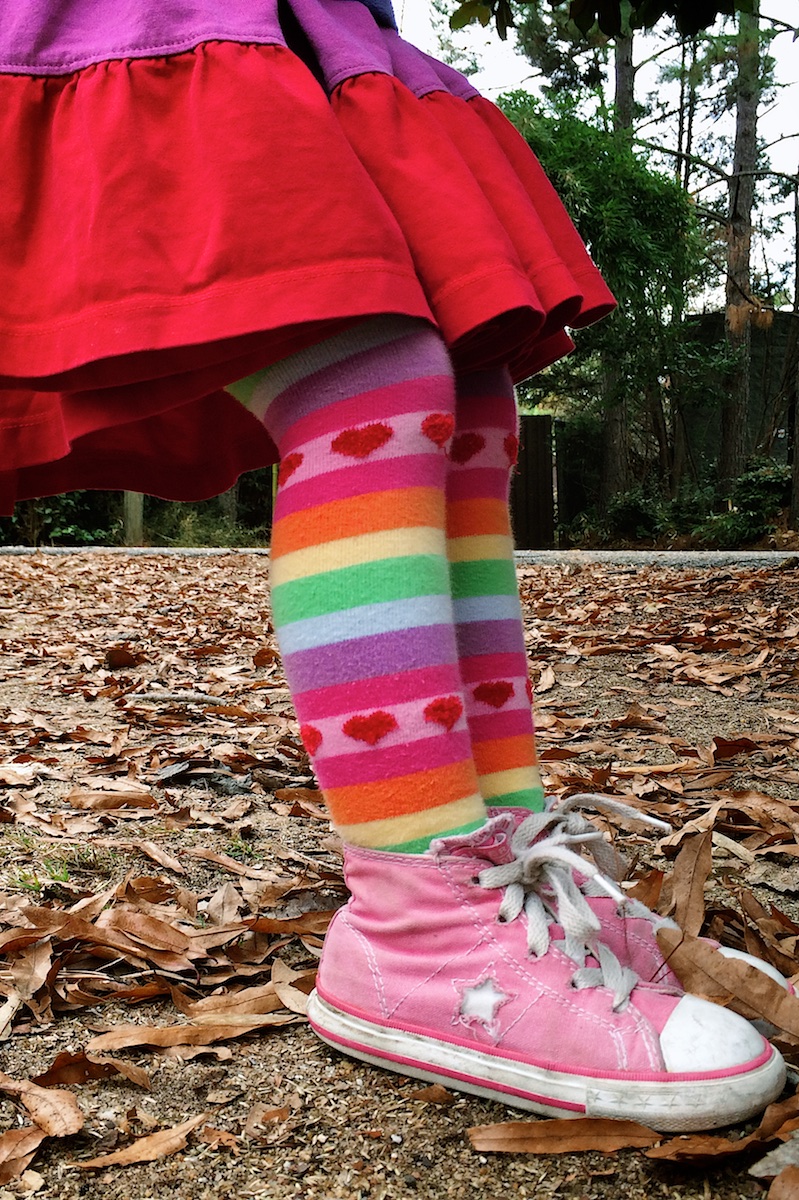 I am ridiculously sentimental about beloved clothes the girls have outgrown, which is why it made me ridiculously happy to see Genevieve sporting our very favorite tights of all time while she was visiting—ones that have been through at least three girls, and maybe Juliette, too. Nicely done, Target, nicely done.