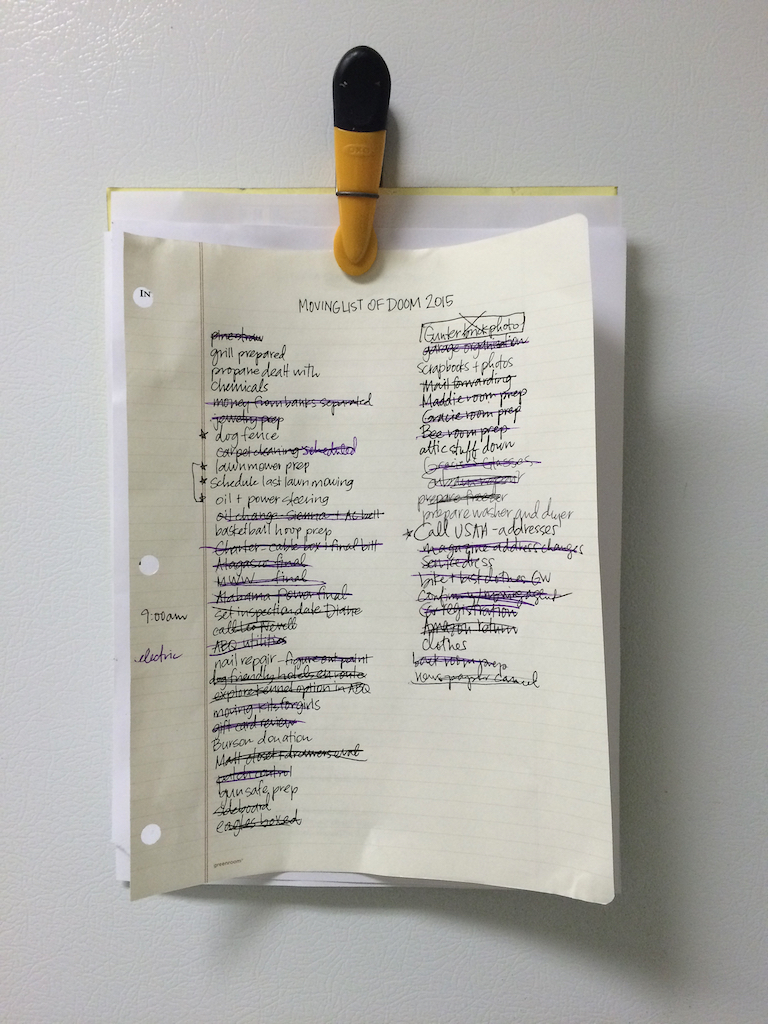 Crossing things off the Moving List of Doom v.2015—almost done crossing, actually, which makes me afraid we're probably missing 30 things. (There are only two things left since I took this picture)(Gracie thought it said "power sleeping" instead of "power steering" and quite honestly, I should add that as a separate item and cross it off for successful completion, twice)

Dreading driving across the state of Texas.

Wondering how I could have gotten rid of so much stuff this year and yet still be so precariously close to exceeding our moving weight allowance.

Feeling glad that we decided to apparate to Hogwarts for a few days last week, even though we cut it a little close to the first day of packing.

Feeling strangely sad about leaving Alabama. Who knew we would find a corner of the south to love! Except for the humidity. And palmetto bugs. And I-85. And news out of the Alabama State Legislature. But other than that, we have many good things to say.

Feeling predictably sad about leaving the friends we made here. Siiiiiiiiiiiigh. Repeat after me: our hearts are bigger now. Our hearts our bigger now.

Feeling absolutely, positively miserable about the Cavs losing in Game 6 of the NBA Finals. We didn't miss a single playoff game and it was building up our good attitude reserves in the face of this move. Wah-waaaaaah.

Feeling ecstatically happy that we don't have to deal with another single showing in this rental house. It isn't sold, it isn't rented, and it isn't our problem anymore.

Feeling the tiniest bit excited to see our new rental house for the first time. Sight-unseen renting is... an adventure! Or something like that.

Feeling a lot, clearly. As one does in any move, and as one does x3 in a third-consecutive-move-in-three-summers move.

Angie Lucas and I were guests on this week's Paperclipping Roundtable podcast and it was like two old friends talking about scrapbooking! Actually, it wasn't like that, it was that. Ha. The topic for the week was all about making journaling more interesting and less a rattling-off of facts. We thought we'd share some of the things we talked about (you can read Angie's tips here and listen to episode 251 here).

Sometimes it's hard to make words seem interesting because you're not sure who they're meant for—so just arbitrarily decide and they'll start to feel more natural! Write as if you're telling a friend or relative about the funny details of an event, or speak to your loved one's future self, or write a letter, like this one. It doesn't matter if Washington, D.C. doesn't read my scrapbook page—it's just a device that helps provide focus. 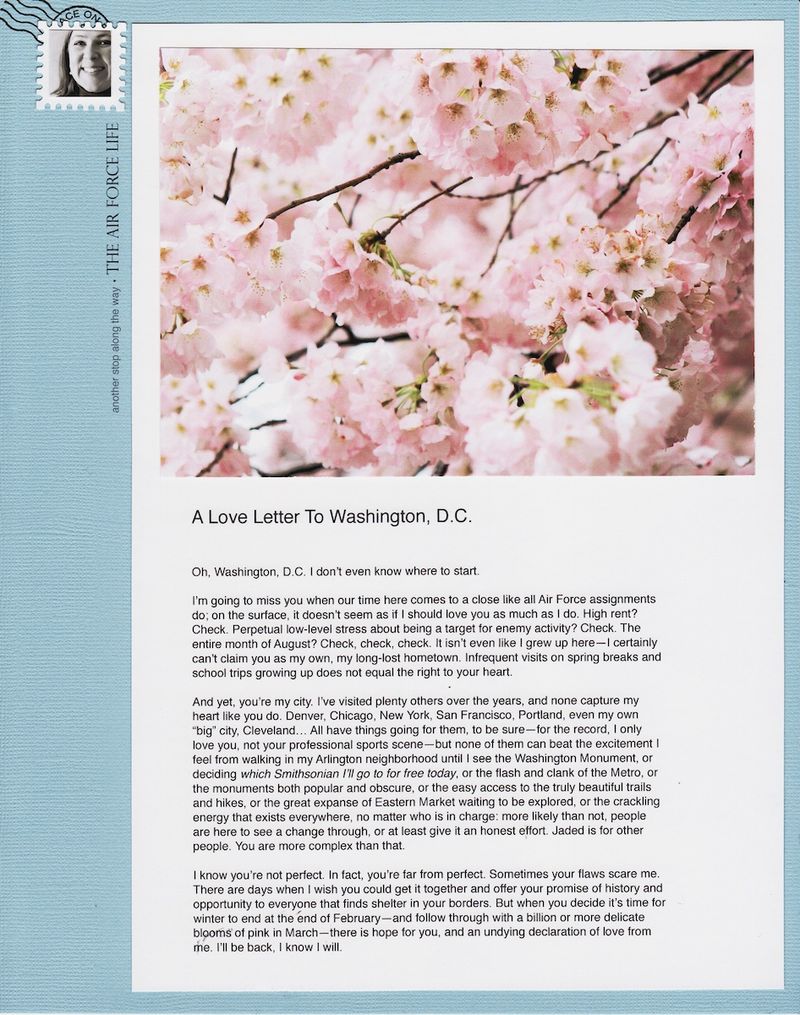 2. Paragraphs are just one tool in your writing arsenal. 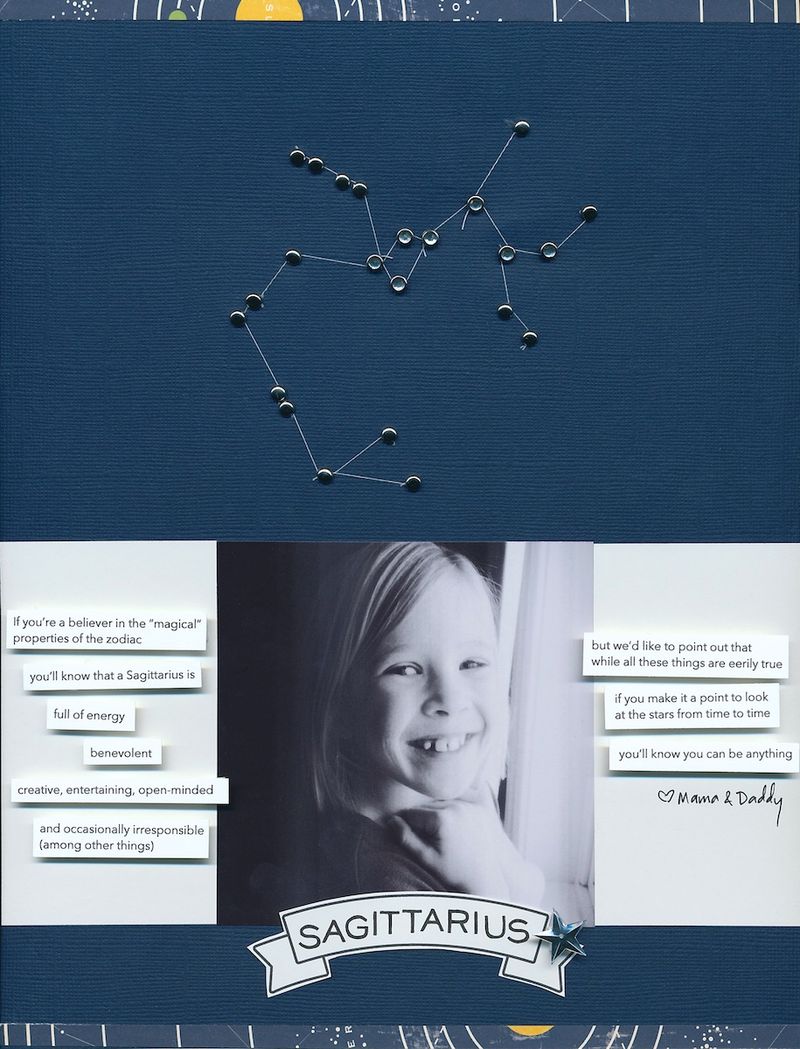 When I teach photography classes, I love to encourage people to use the three Cs to take the most meaningful photos without needing to take hundreds of photos. The three Cs (context, character, and close-up/color commentary) can easily be adapted to writing, too. In this page I focused in on Gracie's exploits in the mud, and used my loud inner dialogue about it as my journaling. What could have been a piece of journaling that said "Gracie loves to play in the mud, but boy, does she make a mess sometimes!" turned into a funnier, richer experience when told this way. 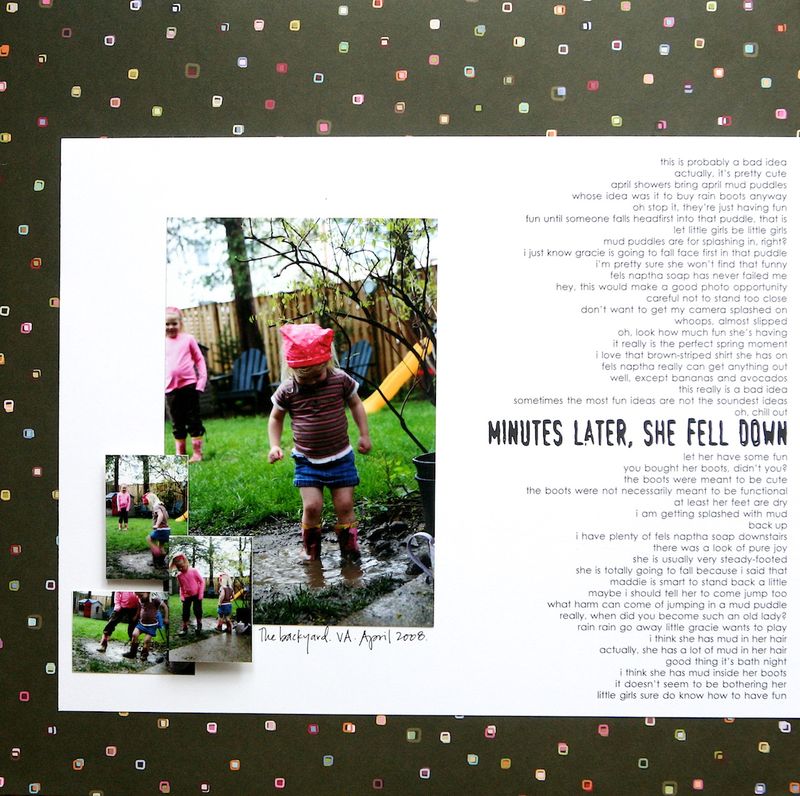 4. Dig deep by writing your observations/thoughts about how something—or someone—made you feel.

It's easy to scrapbook events because they're such a rich resource of information, but writing about someone's influence on you provides depth that rattling off facts simply can't achieve. I know I would have loved to read about the people who helped shape the character and perspective of my grandparents or great-grandparents, because it would have given me insight into what (and who!) mattered to them. Feelings are powerful, and are great vehicles for authentic words! 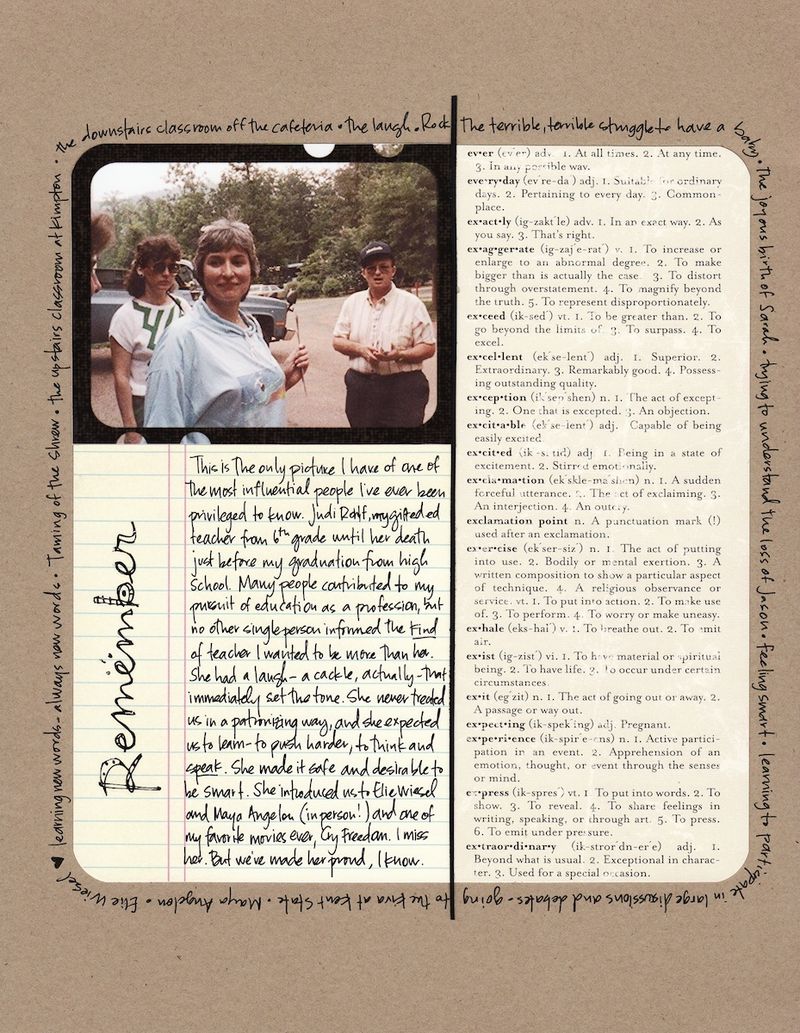 People are natural storytellers—we want to share the funny, sad, challenging, or inspiring things that affect us. Think about when you're just talking about your day with a loved one: you aren't reporting facts like a beginning newspaper writer, you're telling a story. It's a subtle shift in thinking but it can help draw out more natural, interesting writing when you approach scrapbook pages the same way. Make pages because they tell stories, not because you want to capture every single event on the timeline in detail. There's no way you'll preserve all the stories in your scrapbooks, but writing them is so much easier when you realize what a gift they are, no matter how ridiculous they might be sometimes : ) 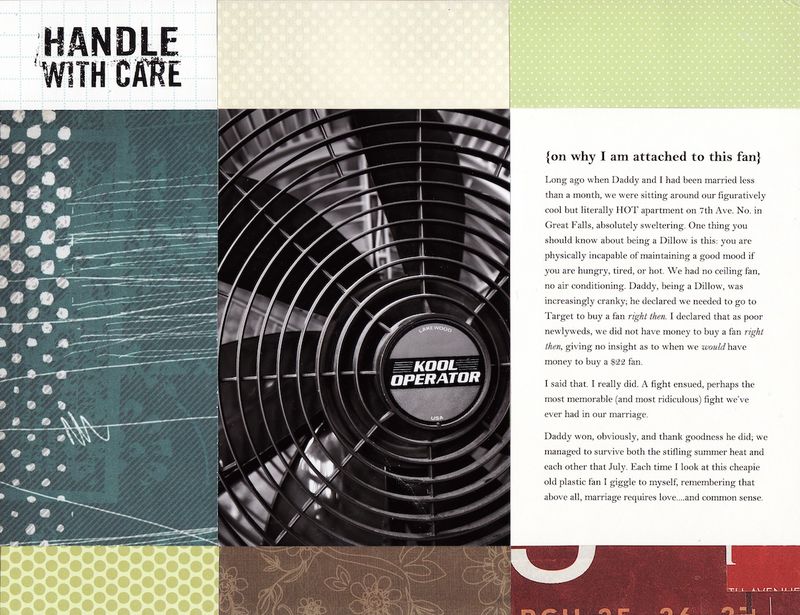 The Traditional May Recap As is custom here, I like to make a list of All the Things That Happened in May for future reference and comparison... the rocket thruster thingies seem like a wildly appropriate metaphor. I honestly don't know how 31 days can always be so packed full of stuff, but the evidence doesn't lie. As usual, it's mostly fun stuff! Enough fun stuff to distract from the less fun stuff, at least most of the time. Here's the list:

+ Very fast visit to Nashville (and Franklin!) with Angie, Keira, and Wendy

+ Hosting Angie, Keira, and Wendy in Montgomery for three days which included some swimming, some attending Southern Makers, some sightseeing in and around Montgomery, some solving the world's problems

+ swimming birthday party for Bridget with girls from school

+ Mother's Day/Bridget's birthday (one and the same this year)

+ field day, which I wasn't able to attend but still had to fill way too many water balloons in the dark the night before to send with Gracie for the 4th grade water balloon stations

+ ripped apart almost every tub/cabinet/storage bag in craft room for first phase of school papers organization while searching for missing school photos (found them, but created terrible mess in wake)

+ two days of gymnastics camp to learn next season's routines

+ organized a huge donation of no-longer-needed scrapbook supplies (don't worry, I still have PLENTY) for a charity organization in NW Alabama

+ Tomorrowland in the theater (we liked it!)

+ trip to U.S. Space and Rocket center (Gracie has her heart set on Space Camp after her second visit here—and if the planets align, it actually isn't out of the question when she is old enough (see first item on list)

And we didn't miss a single Cavs playoff game. I can hardly breathe I'm so excited about the possibility of an NBA Championship. DO YOU HEAR ME, CAVS?

This of course doesn't include the other stuff like driving so much the van rolled 100,000 miles (fitting), regular gymnastics practices, car repairs x 2 in preparation for the cross-country move, a terrible allergic reaction to something that threatened to unhinge me once and for all, moving prep/Goodwill runs, consoling some Very Sad Girls about leaving their schools/friends this year, continuing to try to have this house ready for realtor showings (to include one on the afternoon of May 10)(UGH), all while spending most of the month without air conditioning (broken, but finally fixed as of yesterday).

In other news, the packers don't arrive until June 16 so we have a little extra time to work on the Moving List of Doom. In theory.

Posted by Elizabeth in May | Permalink | Comments (10)

Please join me in welcoming Elise Blaha Cripe to the blog! She's a mama, entrepreneur, and military spouse who knows how to get things done.

Please give us a little background on your path as a maker of crafty things and creative entrepreneur. 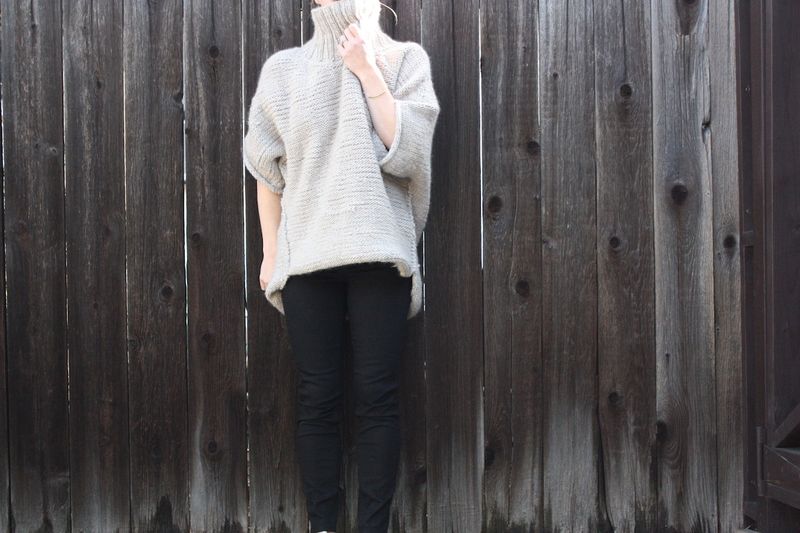 I have been making things all my life and started my first creative business (handmade frames!) my senior year of high school! started my blog when I was in college and over the past nine and half years it has become a creative record for my projects and helped me launch my business which has been many things over the years. Currently, my focus is on GET TO WORK BOOK, a day planner + goal setting journal.

You’ve experimented with a lot of different styles of crafts over the years; how do you decide what’s worth sticking with and what’s OK to abandon? Do you experience unfinished project guilt? 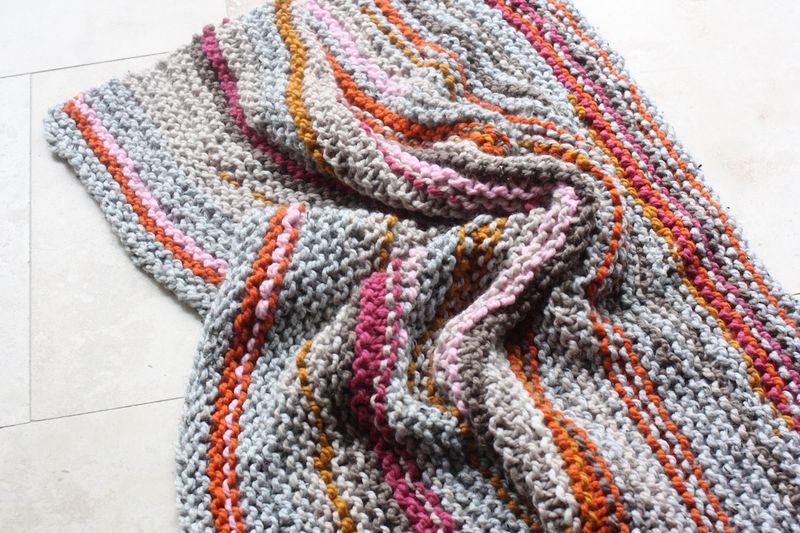 I think I assume nothing will stick forever. I have many crafting styles that I rotate through. One season I'll be super into knitting and then I'm over it for a year. Or one year I'll LOVE sewing - cannot get enough! - and then I'll drop it for months. In my mind, it's all worth trying but there is no guilt or sadness in abandoning a craft for awhile. I have done this long enough to know it all comes back around and the next time, your style will have evolved and the craft will feel totally new and inspiring again.

Long-time readers of your blog will be familiar with your “just start” mindset. What keeps you motivated to see a project through during the long middle stretch? 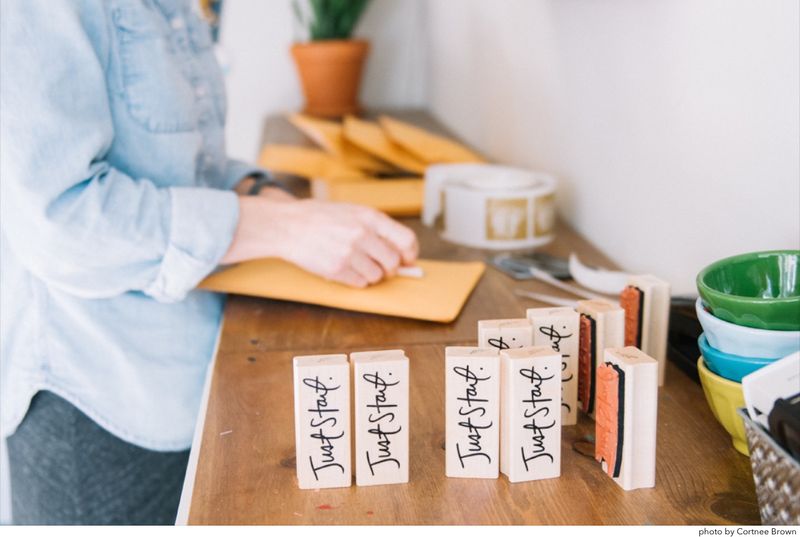 The middle is ALWAYS the hard part. I think I tend to stay most committed when I work fast and power through a project. Quick work helps me stay on track and it keeps me from looking around and getting bored or worried that something isn't turning out how I planned. I also think sharing progress updates, on my blog or on Instagram can be fun and motivating. Sometimes that helps me push through when a process is starting to drag.

You approach goal-setting in a very practical way. Do you have tips to share about your process that could help creative types reframe their to-do lists and tackle unfinished projects? 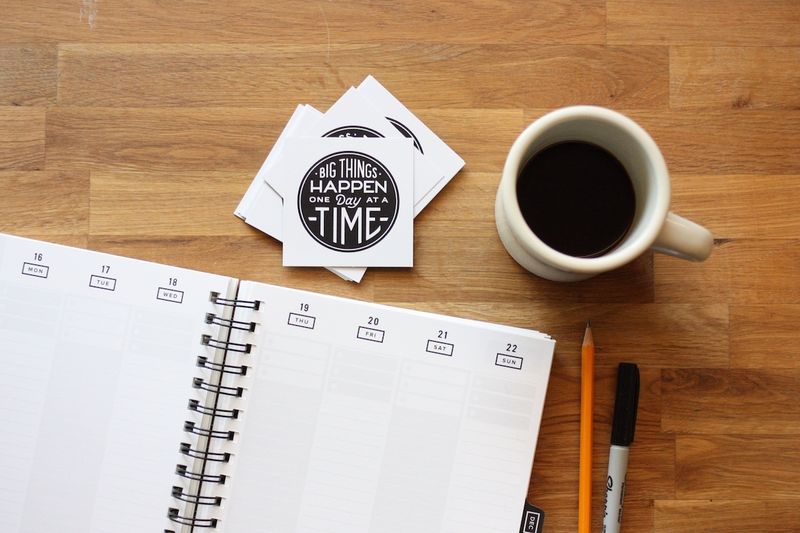 Absolutely! I think the key with goal setting is to first pick things to work on that feel fun and inspiring. It's okay if they are challenging, but it helps if you actually WANT to do the work and make the change. Next, I recommend setting a deadline for your goal. Finally, I think it's hugely important to break down your goal, whatever it might be, into small, manageable tasks. I like to say that "big things happen one day at a time." It's not a zero to sixty process. It's about taking that first step and letting that small success fuel the second step and then the third, and suddenly, you're crossing things off.

Tell us a little about your biggest (nearly) finished project to date: Get To Work Book! 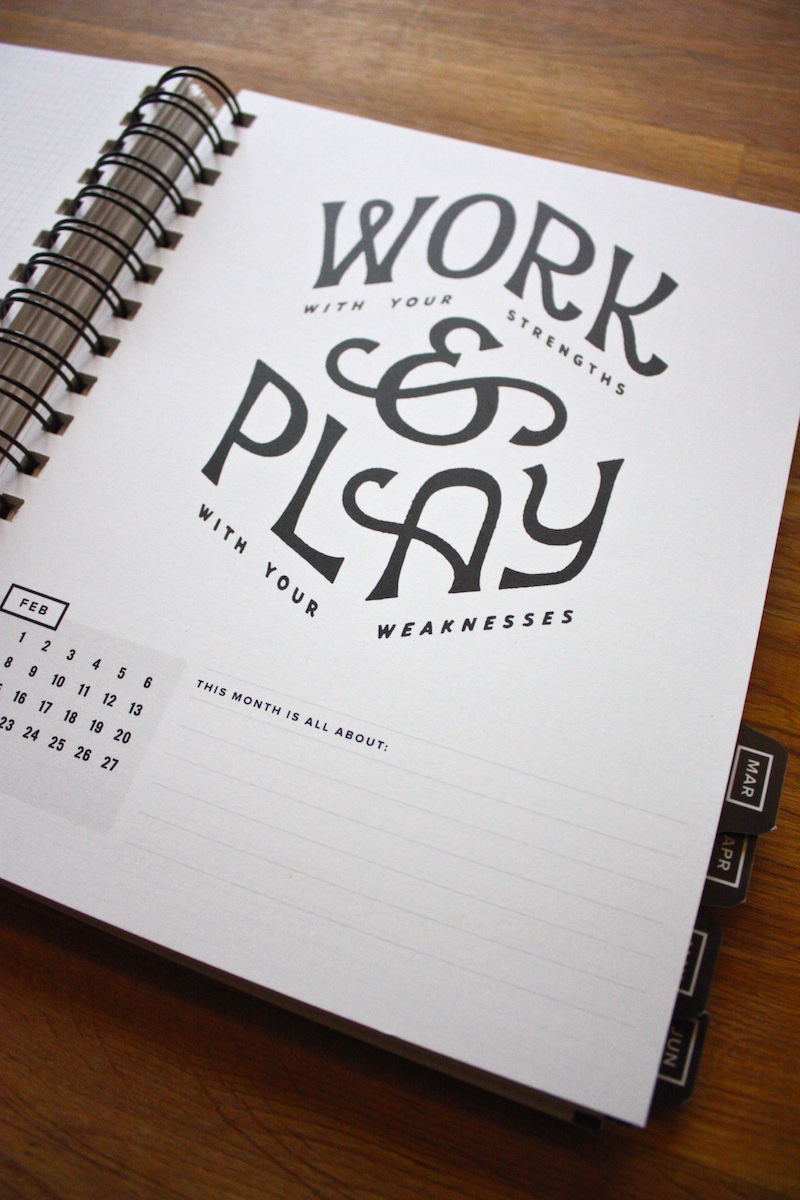 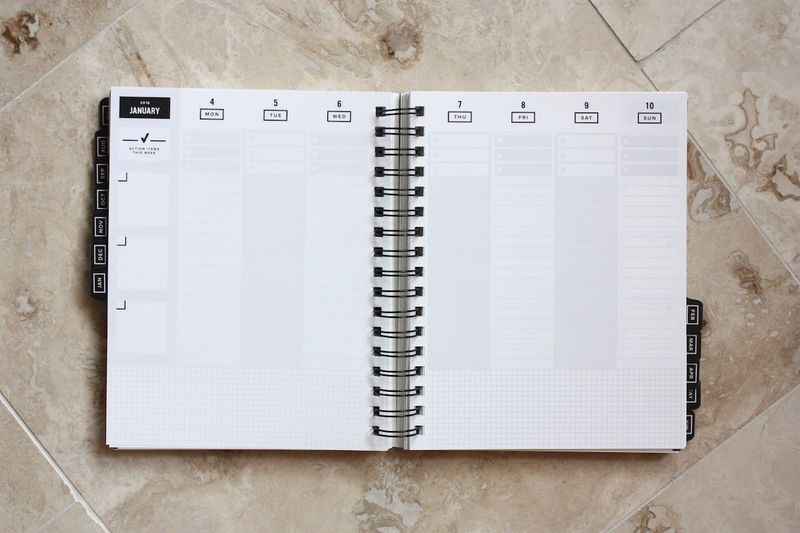 Hooray! I am so excited about GET TO WORK BOOK. For this HUGE project I took everything that I know and love about goal setting and packed it into a day planner. It's designed to help you do the work but it's also created to get out of your way. I think it's easy to spend time dreaming about your goals or organizing your to-do lists. The goal of GTWB is to help you turn those goals into something real and turn your organization into completion. You can read so much more about this book and the planning behind it on my blog. :)

Do you have any lingering business or personal unfinished projects you’d like to tackle in 2015?

Nothing "unfinished" but a lot in progress! I plan to launch the 2016 version of GTWB in early September. I would also like to open a GTWB shop with prints and posters this fall. I've got a podcast that is always recording and a blog that always needs posts. AND, I'm having my second kiddo in November. So it's a busy second half of the year but I'm thrilled about it. All good things. 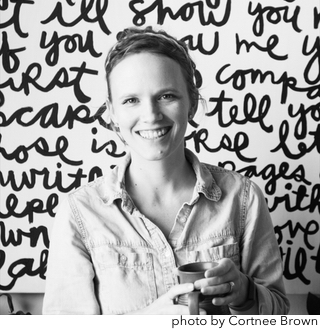 Elise Blaha Cripe is a blogger, crafter and goal setter in San Diego, California. She has been sharing thoughts and DIY projects since 2005, running an online shop of handmade goods since 2008 and this spring launched GET TO WORK BOOK, a day planner + goal setting journal. Elise also hosts a weekly podcast, elise gets crafty, that focuses on handmade business, blogging, creativity and inspiration.