When I was working for Ella Publishing Co., I was invited to participate in a project to promote the release of a wonderful book titled Dear Photograph by Taylor Jones. I was looking for my submission last night since we're moving back to F.E. Warren AFB, and I wanted to remember what I had written back in 2012: 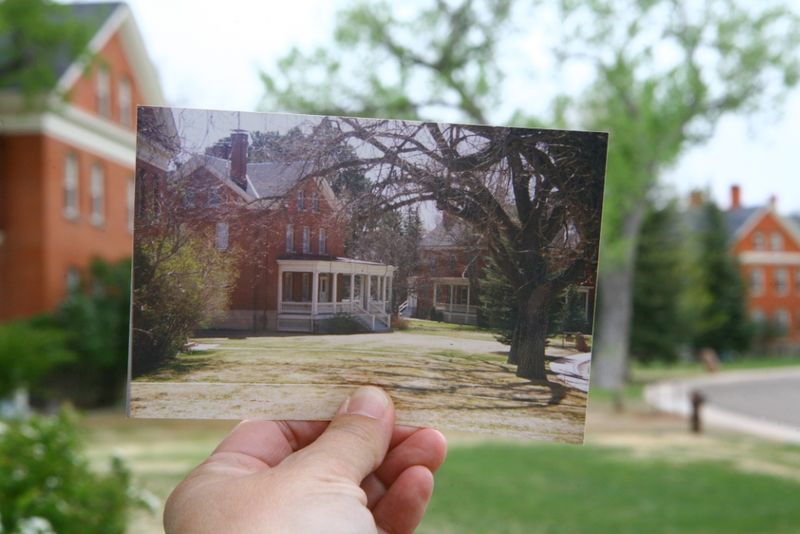 I stood here on the hotel steps on a house hunting trip to Cheyenne in April 2000, wishing like anything that I could live in one of these beautiful historic old houses (but knowing the two year waiting list made that impossible). I never could have imagined that 12 years later, my home would be the house with the side porch peeking out from behind the cottonwood trees on the most beautiful circle imaginable. Even though it's only temporary until the Air Force sends us somewhere else, I am grateful.

Seriously—the odds of me taking a photo of not just one but TWO places we'd be living in the future? That's pretty far-fetched. And yet, there you have it.

You can check out the many wonderful submissions to Dear Photograph here, and follow along on Instagram, too. I am excited for the many opportunities to run around and take some new Dear Photograph photos since we'll be living in a place where we have an actual history again : )

I got into trouble with Maddie a few months ago because I bought some vanilla that was not McCormick brand—she saw it and was indignant about the fact that I was disrespecting her childhood by replacing it with something other than a red cap. (For the record, my childhood vanilla came from a ginormous, vaguely exotic, seemingly bottomless bottle straight from Mexico via my Aunt Dee Dee, but I digress). It's funny, the things that stop us in our tracks, yes?

So when Bridget and I were in guerilla-shopping mode at Target recently and I saw these Vintage Charm bowls, I screeched the cart to a halt like a cartoon character. 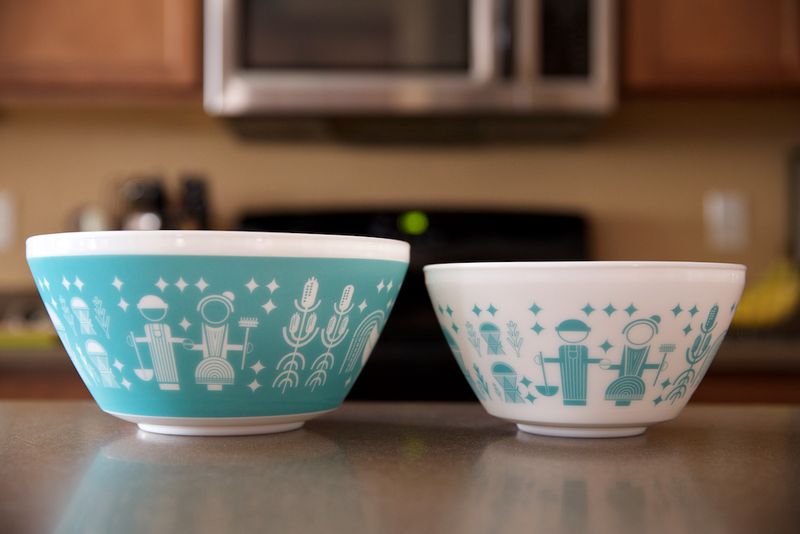 MY CHILDHOOD!
(back me up on this, Mama)

Important note: This is NOT actual Pyrex, even though it was on an endcap with Pyrex things and tries to fool you into thinking it's Pyrex... it's only "inspired by" Pyrex. But it's a cool counterfeit. 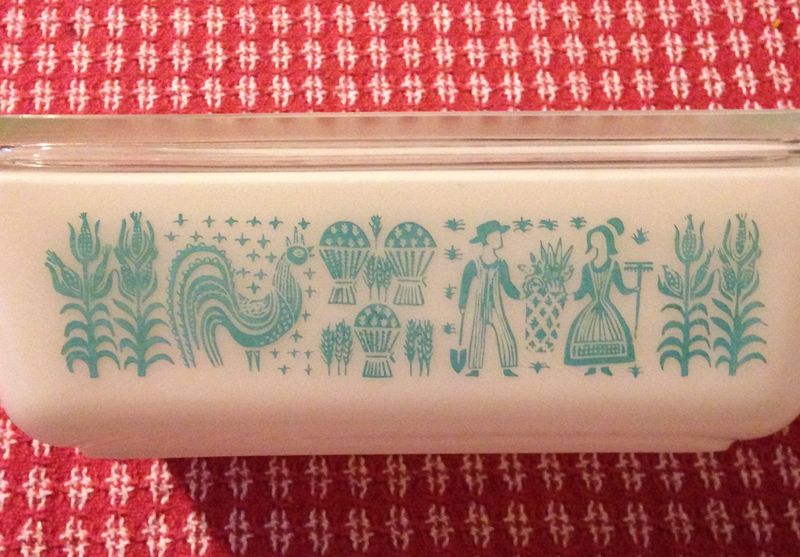 I got two. Even though we're moving, and we're on a strict possession-reduction regime once again. Because, sometimes you just have to respect your childhood.

(And yes, next time I buy vanilla it will be McCormick)

Exactly no one should be surprised that Maddie—sweet little Maddie—found herself playing La Llorona in her Language Arts final project (producing a short film from beginning to end). La Llorona is new to us, but not new to this part of the county: her story is ghastly, ghostly, and precautionary in Mexico and New Mexico, too—little children, be warned about wandering off at night.

Remember this? Or this? Or THIS? Or best of all, this? 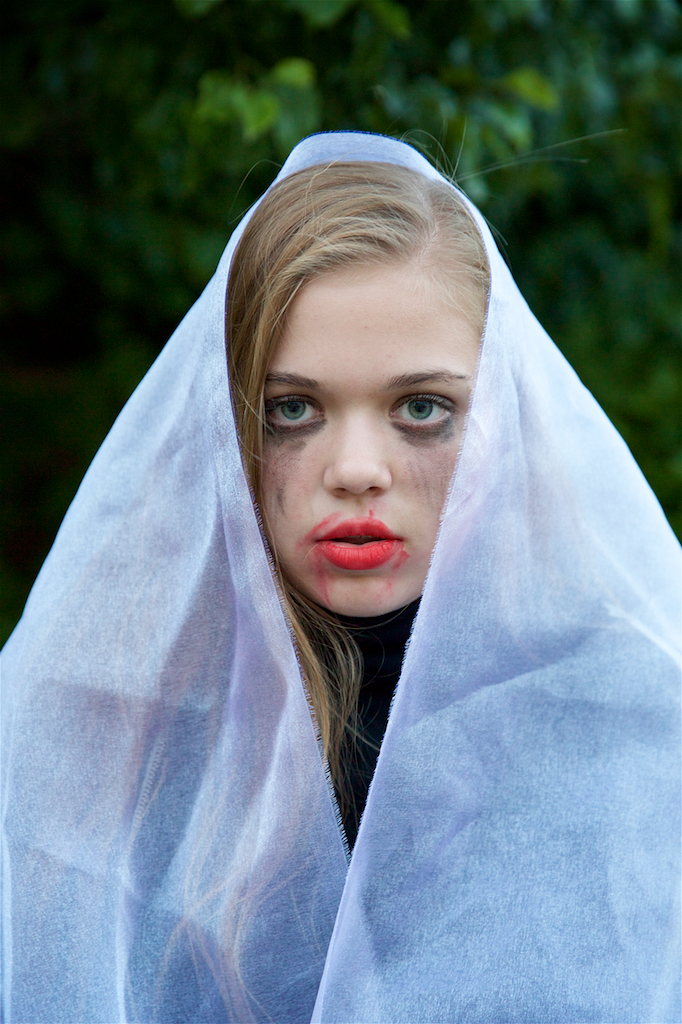 Not to worry: her group had to film lots and lots of takes in order to get her with a straight face the whole time. (Some things never change) 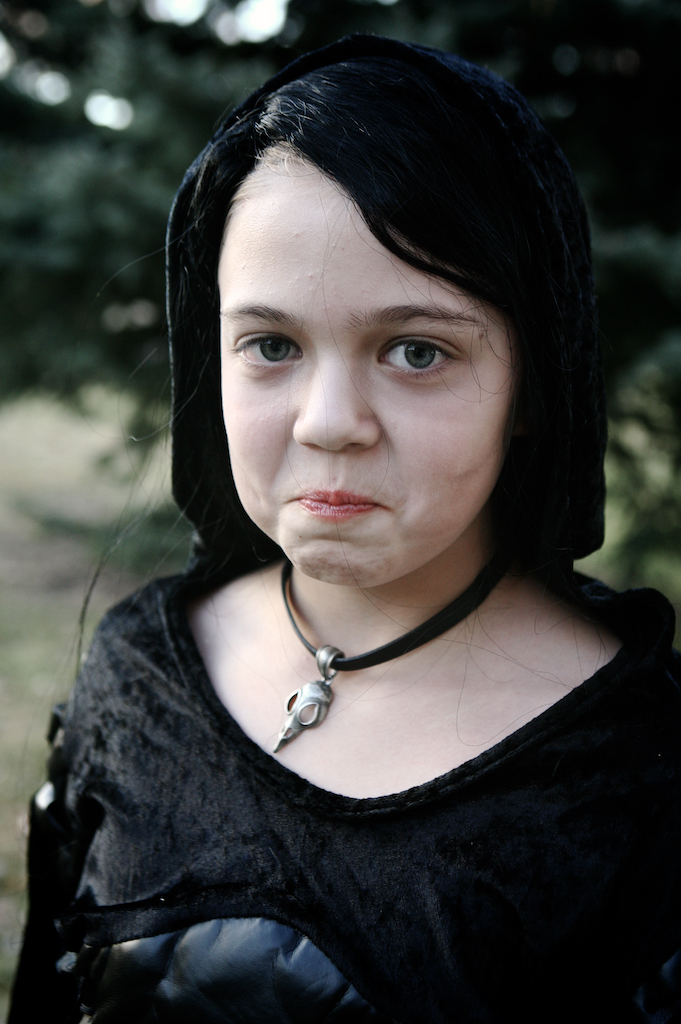 As much fun as it was to get to know yet another creepy literary character, she is beyond done with this particular project and ready to get back to her regularly scheduled life—no more hanging out near creepy tunnels and the arroyo at dusk to turn Mexican myths into horror movies.

During our spring break (postcard delayed a little, sorry) one of the places I wanted to visit was Acoma Pueblo, about an hour west of Albuquerque. I had heard it was an interesting tour of the oldest continuously inhabited community in North America (dating back to the 1100s AD), so we picked a day, coordinated with Abby and her sister who were spending their spring break week in Santa Fe, and headed out to meet them. I was proud of myself for remembering to check the weather quickly—55º as the high and partly sunny! 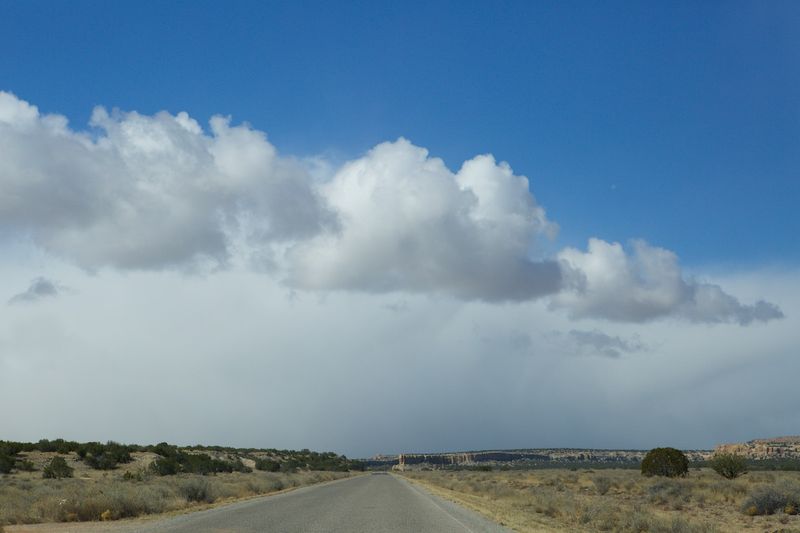 As we drove along we all thought "huh, check out that weird cloud! What the heck! What's going on down the road there?" and similar thoughts along those lines. This picture here is what we call FORESHADOWING. Because no Dillow adventure is really safe from the stupidity of not being prepared for the weather, no matter what we think the weather might be. 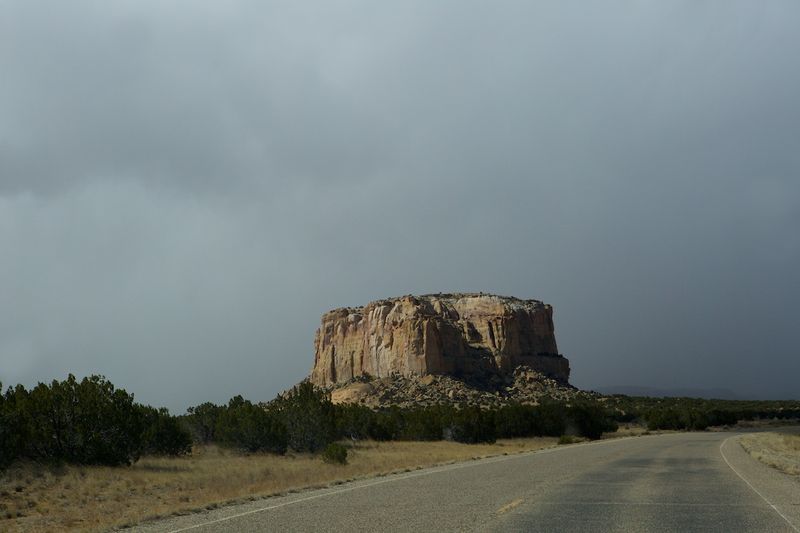 Squint a little and you'll notice this does not look like a 55º partly sunny cloud. This looks like a raging snow and blowing dirt cloud. We arrived at the Sky City Cultural Center and Haak'u Museum with a sense of panic in our bones, because it was f r e e z i n g when we stepped out of the car. Everyone had a sweatshirt or fleecy of some kind save for Maddie, who had her Armory jacket on (which is great for 65º and partly sunny, or 72º and partly sunny, but not so much 31º and dirt-snowing). But we were meeting two of the Watson girls! We couldn't turn back now, so we did what Dillows have done before: we desperately bought the closest thing we could find that would be more suitable for a freezing adventure, which in this case was an XXL long-sleeved T-shirt for Maddie. Spoiler alert: this was not enough to fix the problem, but we forged ahead anyway. In the future we will staple our bathing suits and warm coats to our foreheads before embarking on adventures. The cloud blew over, but it was still like winter temperature-wise.

However! Acoma Pueblo is awesome in any weather. 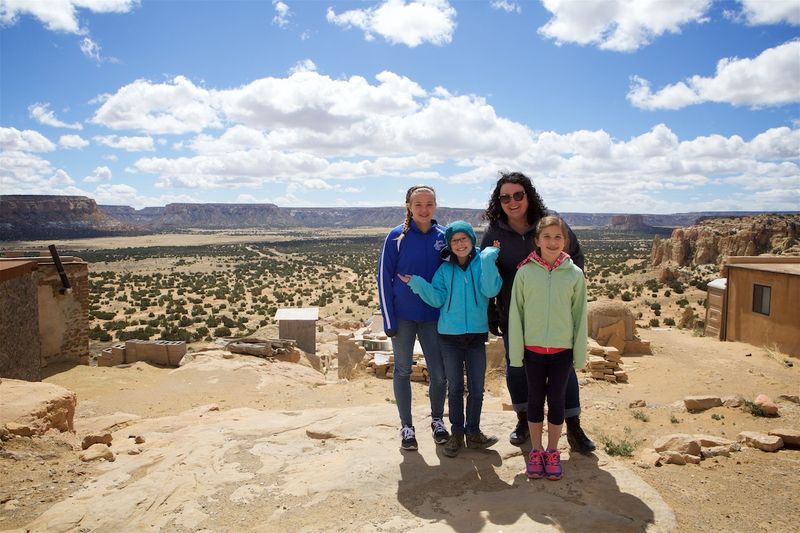 You have to take a shuttle bus to get to the top of the rock structure (367 ft up!) where the oldest portion of Acoma Pueblo sits on a sandstone bluff; for hundreds of years this was not an option, of course, and very precarious rock staircases were the only way up and down. We so wanted to come down the staircase and walk back to the cultural center but it wasn't an option on this day because of the wind. 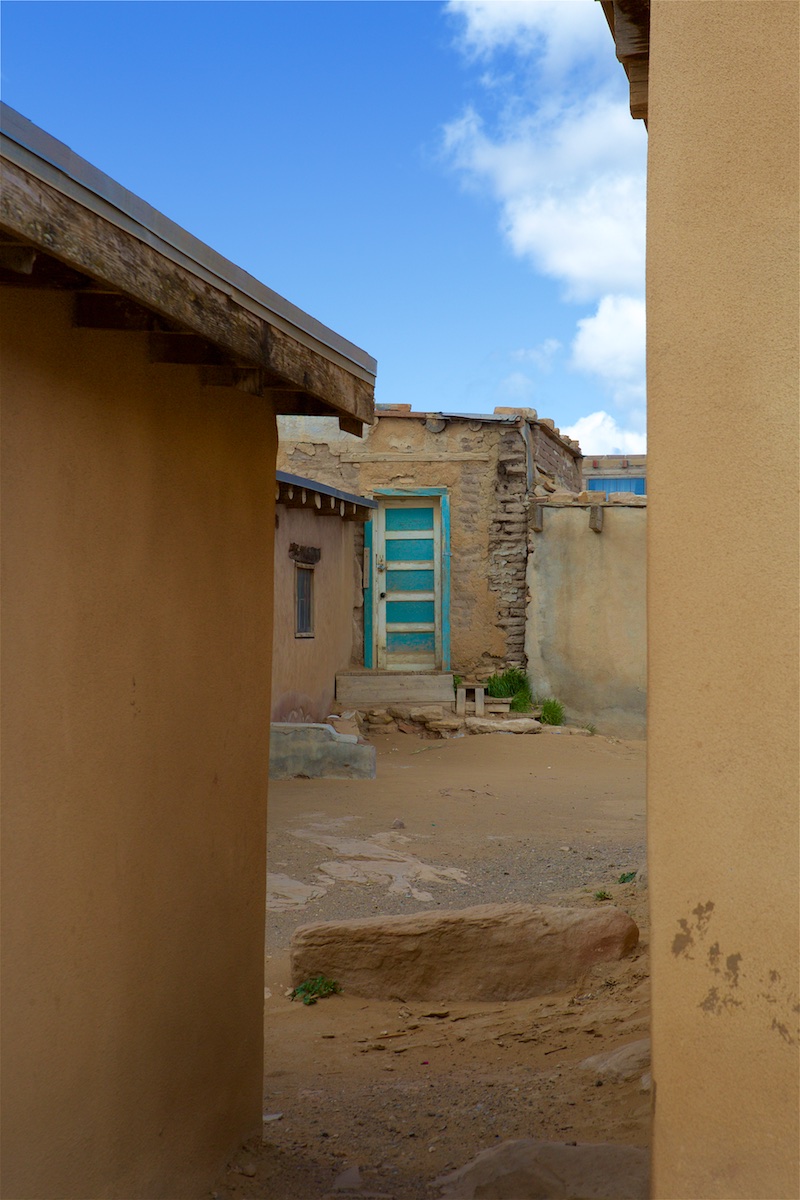 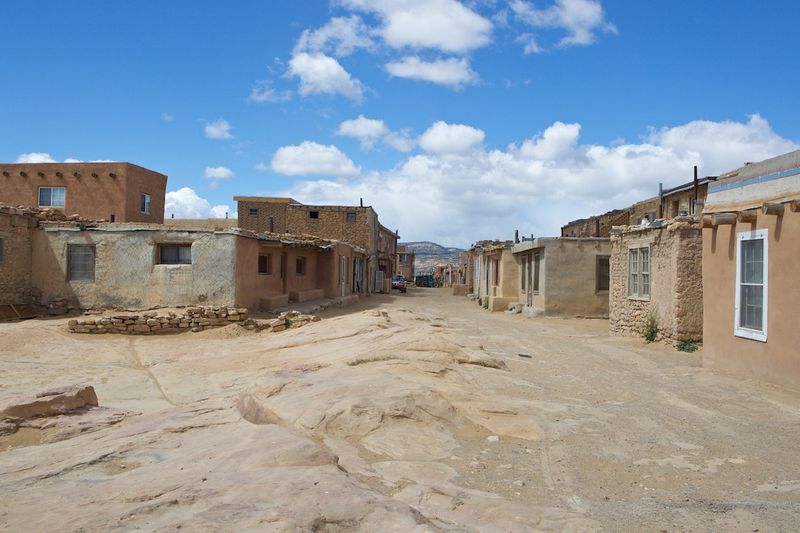 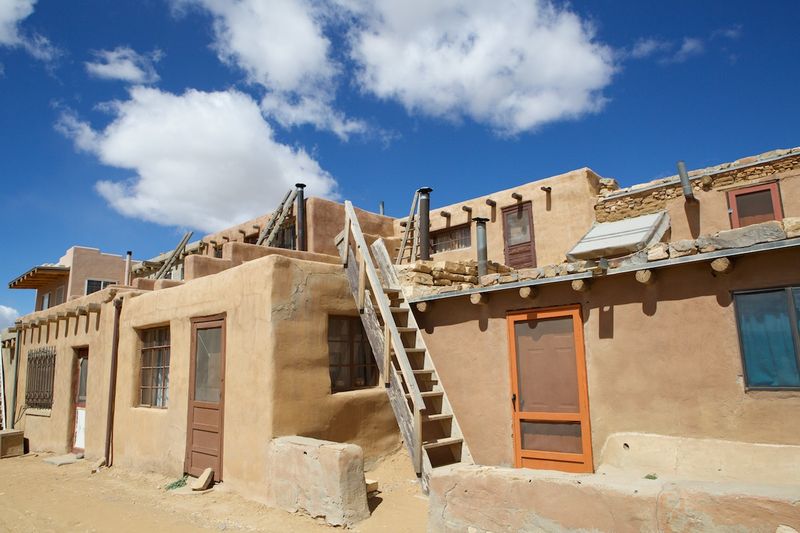 There are some 250 homes up here, though only a very small portion of those families live on top year-round; the rest are seasonal residents these days, and maintain homes down below on the more than 400,000 acre Acoma Pueblo land. None of the mesa homes have electricity, running water, or plumbing—though a new set of fancy composting outhouse units has been built by a company from Montana in recent years. We had a hard time imagining how dark it must be at night here, finding one's way to the bathroom. It's a lot easier to haul water than it used to be, too, because residents just use their trucks. 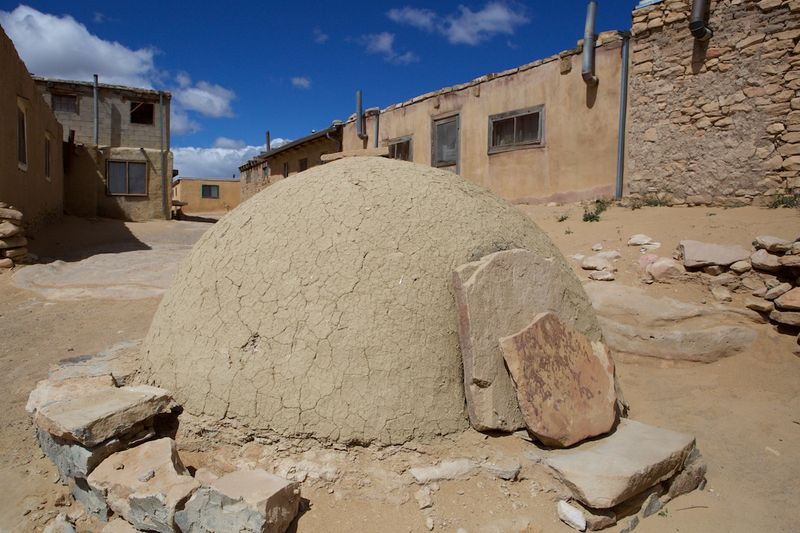 The tour guide told us all about the ovens that are privately owned but community-available; you see ovens like this on many pueblos in New Mexico. I keep telling Matt I would like him to build me a big oven like this in the backyard of our forever home. Ha. It can be across the yard from his beehives. 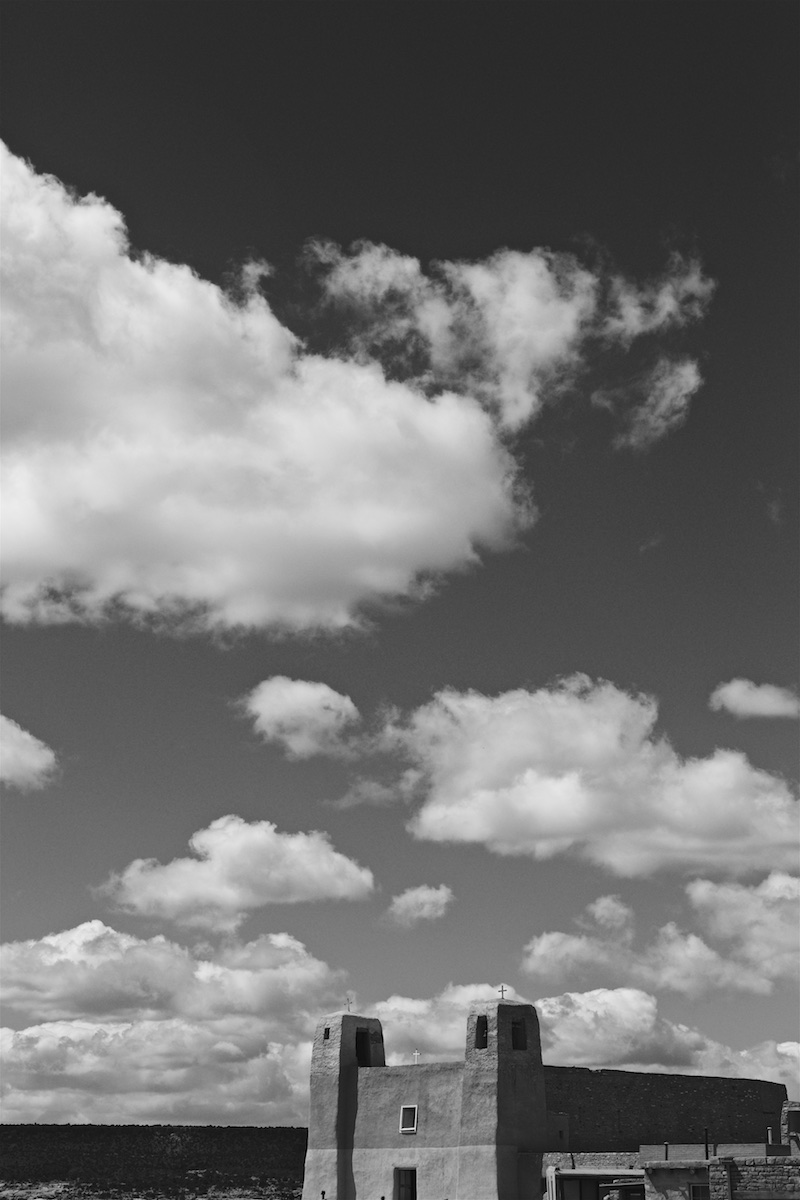 Part of the tour includes a visit inside the San Esteban del Rey Mission Church and the layered cemetery right outside it. The mission was built in 1629 on the backs of the Acoma people under the Spanish. The pine used for the supports was carried all the way from Mt Taylor. Without the use of trucks, of course. You aren't allowed to take photos of the inside of the church or the cemetery (or the tragic fence surrounding the cemetery that is built with holes to allow the spirits of the children stolen by the Spanish to rejoin their loved ones). The history of the Acoma people is devastatingly sad when it comes to the Spanish—what native history isn't out here?—but also sprinkled with defiance. It was hard not to be teary listening to the tour guide tell the stories of how her ancestors lived, survived, fought back, and died under Spanish control. 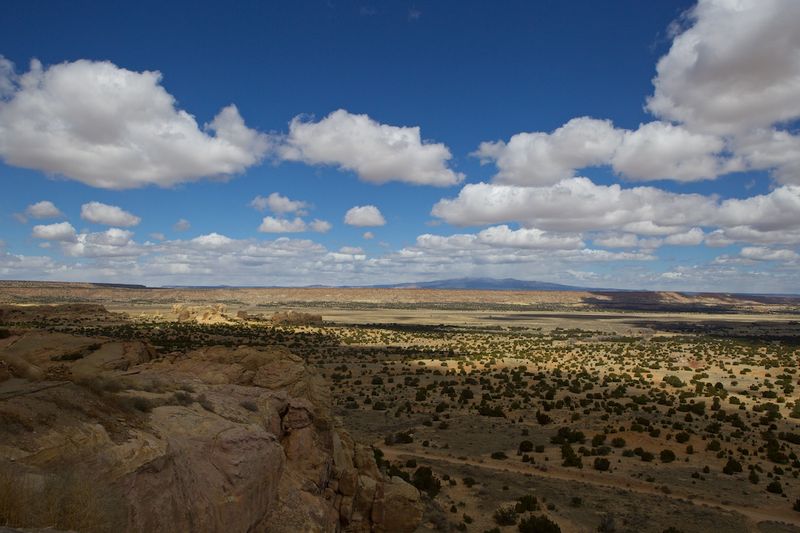 Mt Taylor, as seen from atop Acoma Pueblo. It was not a close resource. 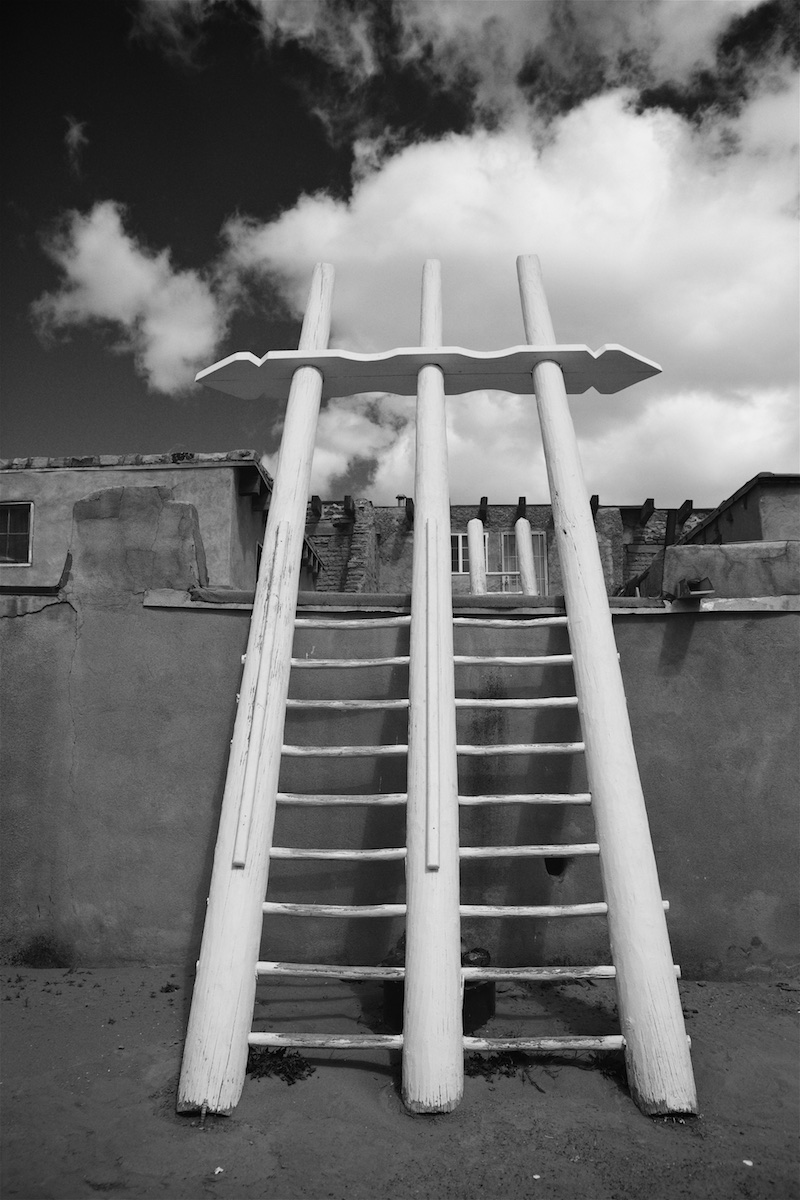 We learned about the ladders that are all over the pueblo, to include the ones that led to covert kivas that persisted through the decades of lost sovereignty. 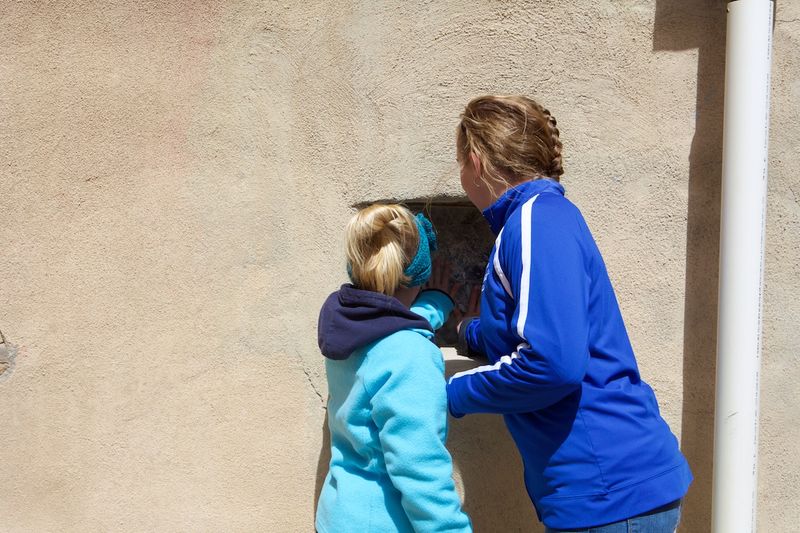 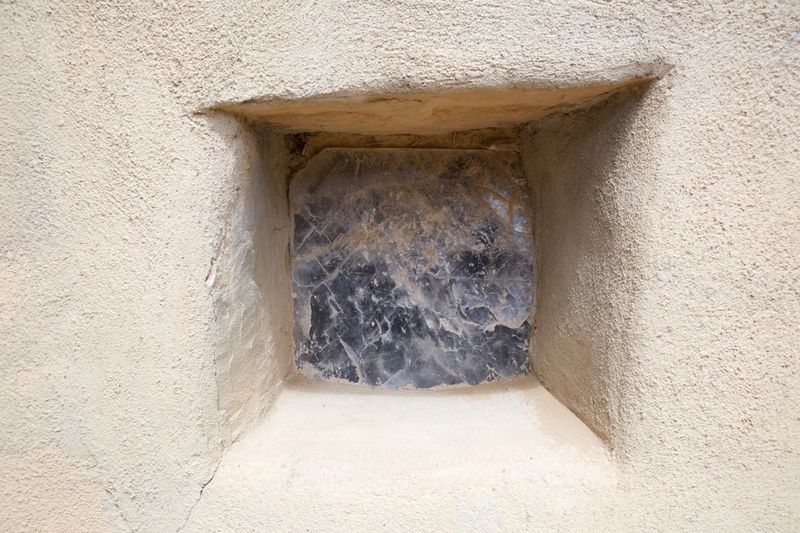 I loved this traditional mica window. It is amazingly smooth to the touch, and would let in light while protecting everyone inside from the dirt-snow that clearly happens here. It is as beautiful a landscape as it is harsh. 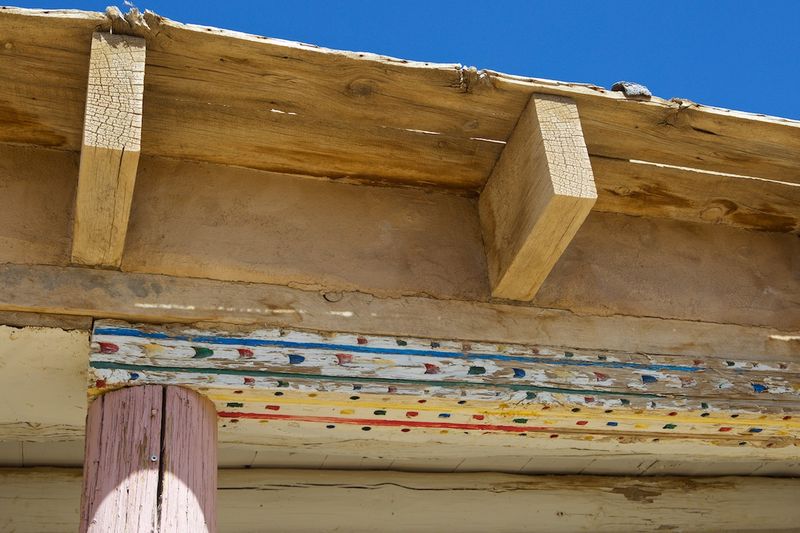 Acoma is also famous for its pottery and art; craftsmen and women were set up to sell us things around every corner. I got Gracie an Acoma owl : ) I also about fell over when I spotted a tiny sleeping cat for sale, because we have one of those in our house. I had never realized it came from Acoma, and I had to think back to who gave it to me (my friend Robin) back when we lived in Montana. Sure enough, when I got home I checked it out and it had Acoma, NM written on the bottom! Robin reminded me that she and her husband Mark lived in Albuquerque while he was doing his internship years ago, and visited Acoma a number of times (and stocked up on little gifts to give friends). She was not mad at me for not realizing the significance of her gift until 20 years later. Heh. 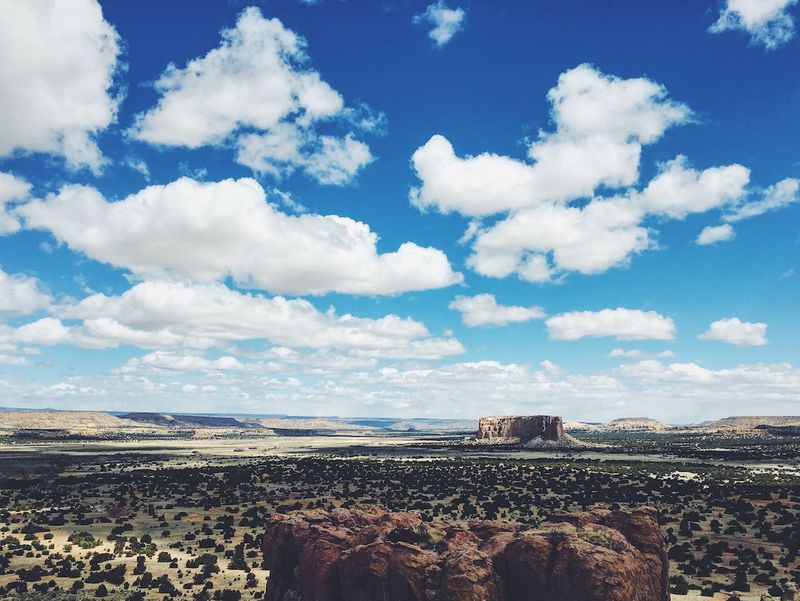 It is seriously gorgeous out here. But it's a good thing that Matt was not born an Acoma baby, because, edges. 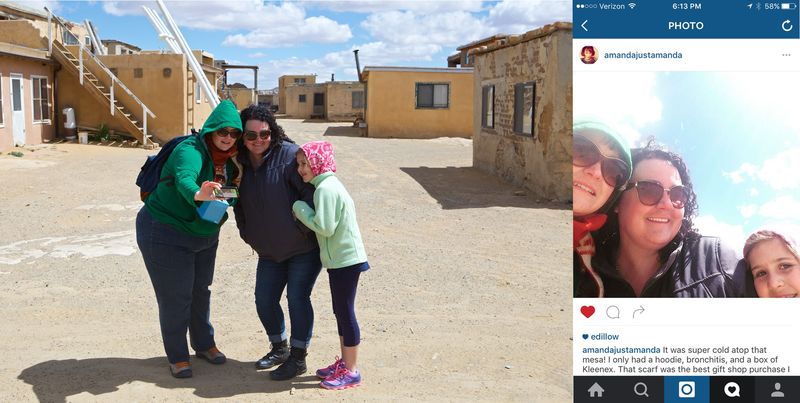 I took a picture of a selfie that ended up being very meta later in the day : ) We were so cold by this point. SO. COLD. 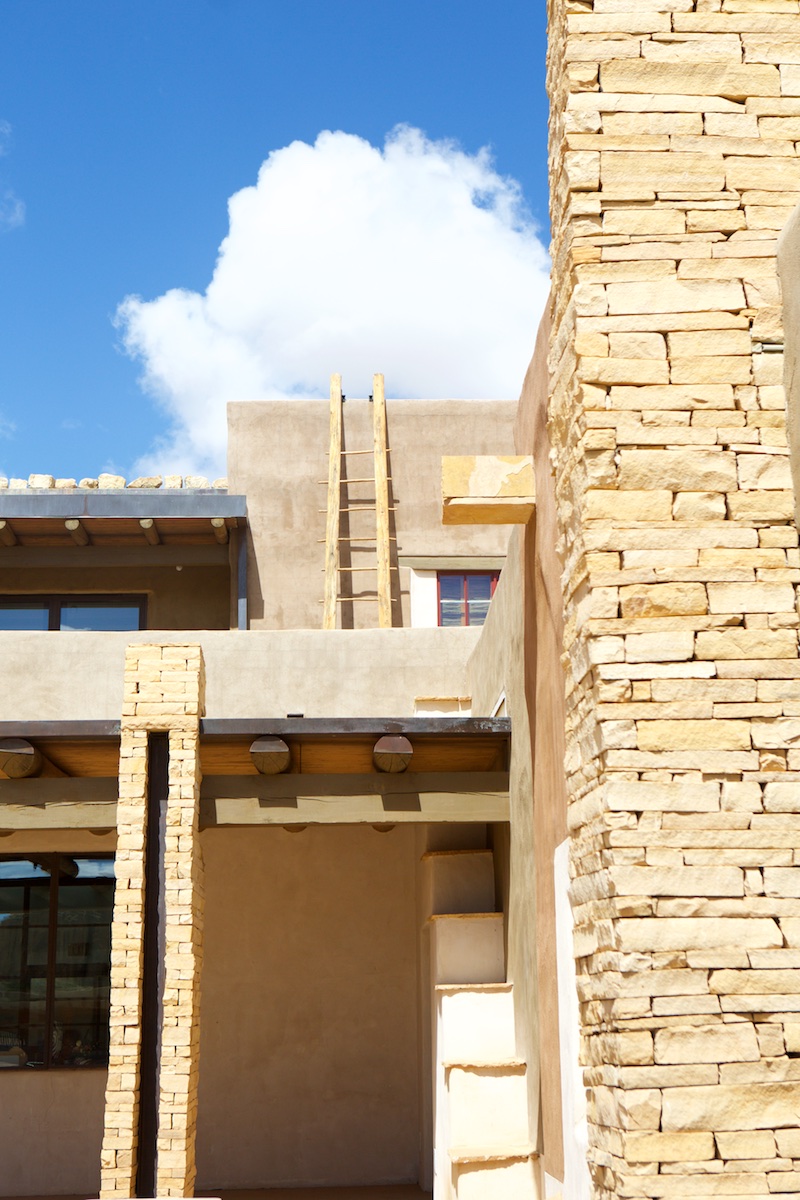 Back down in the shuttle to the cultural center, which is really stunning. 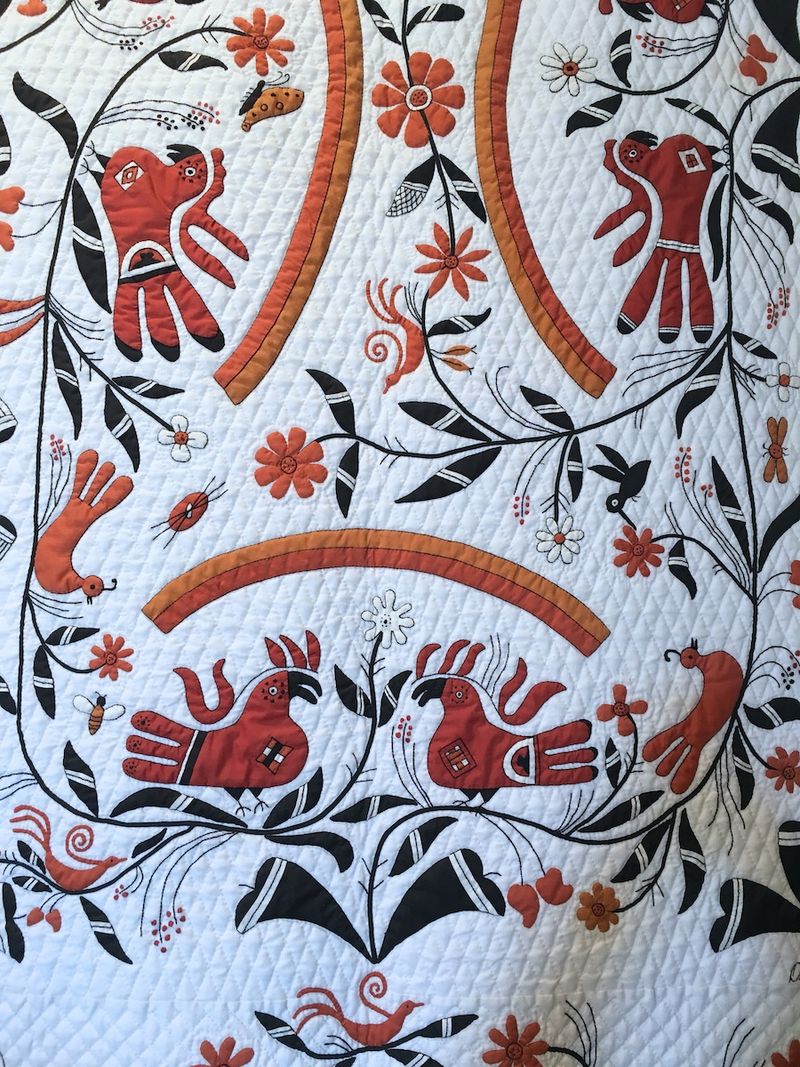 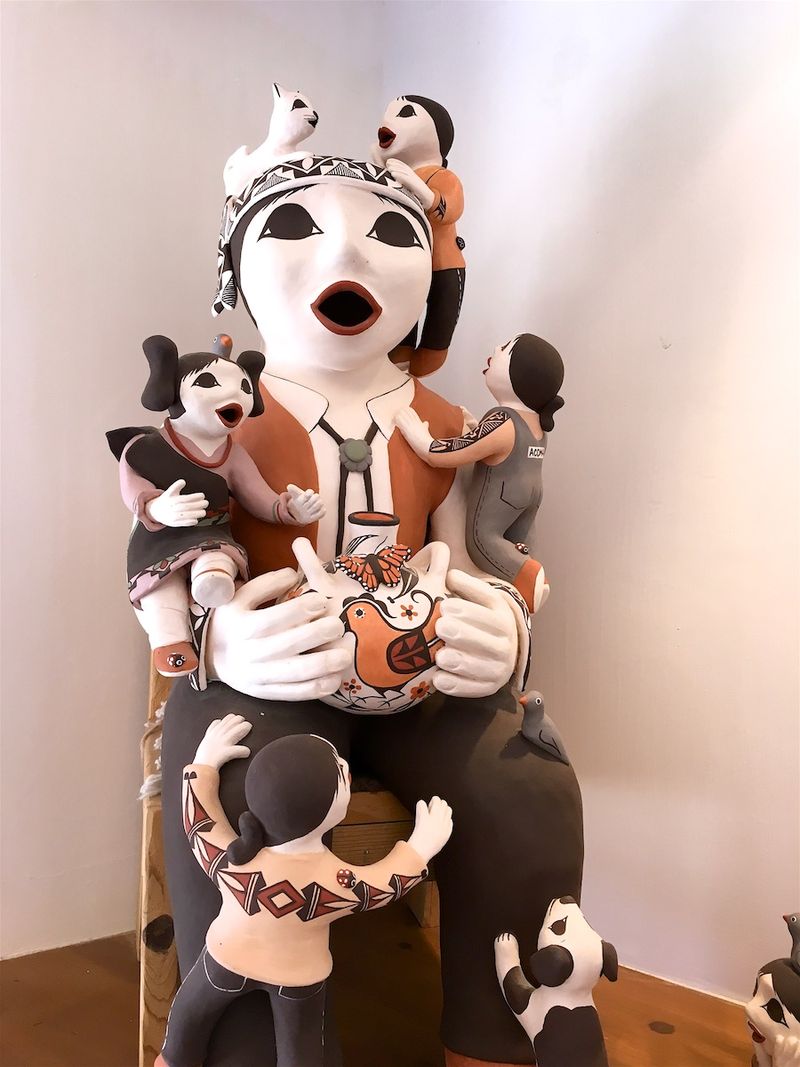 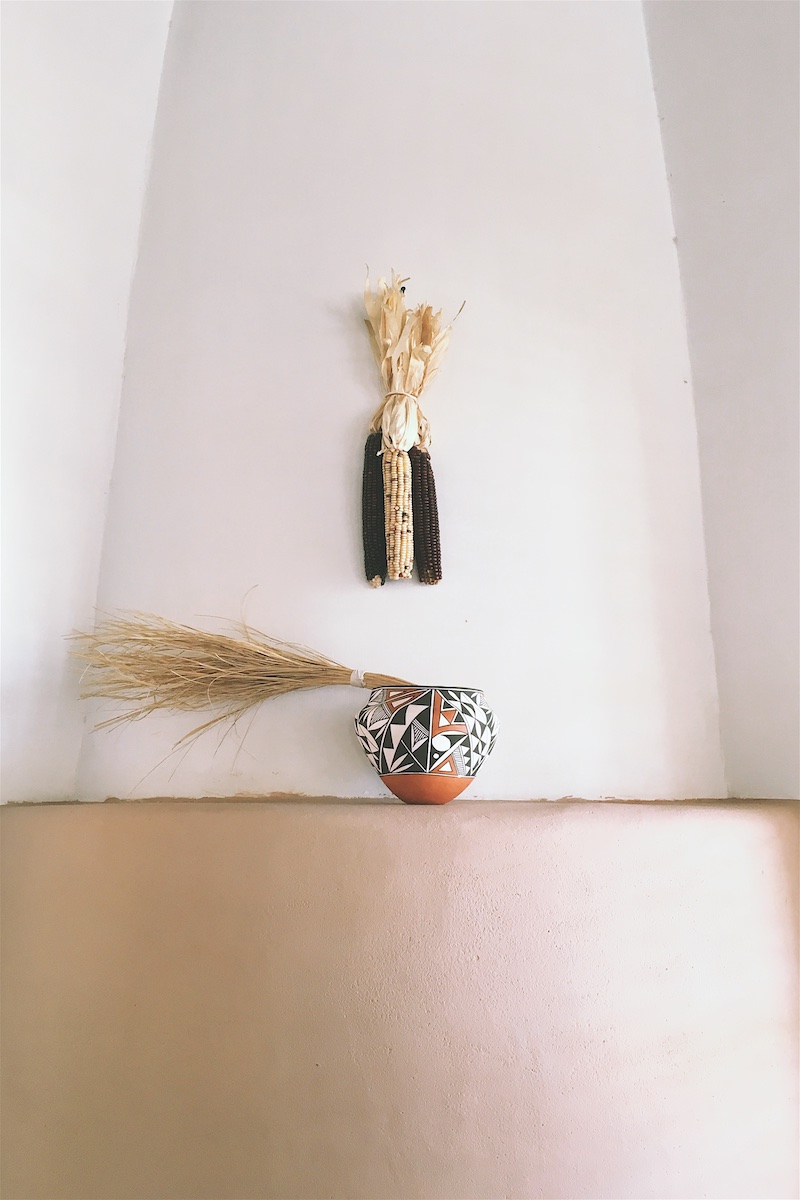 This quilt! The pottery colors! Beautiful. Matt and I picked out a seed pot to add to our collection (of two) pueblo pottery pieces. (He bought us a black wedding vase from San Ildefonso Pueblo on his way to missile training in 1994). Now we're kind of thinking it would be fun to have something from all 19 pueblos, ha. 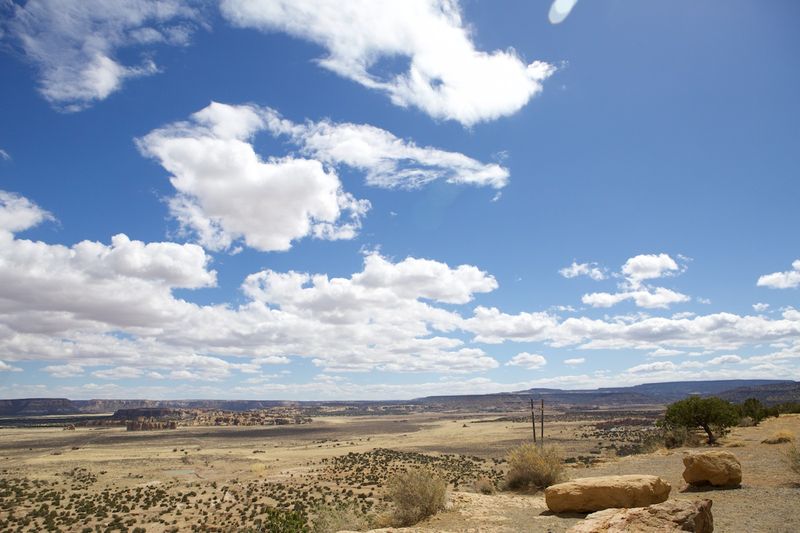 What an amazing place. But if you go, throw a coat in the back of your car, just in case.